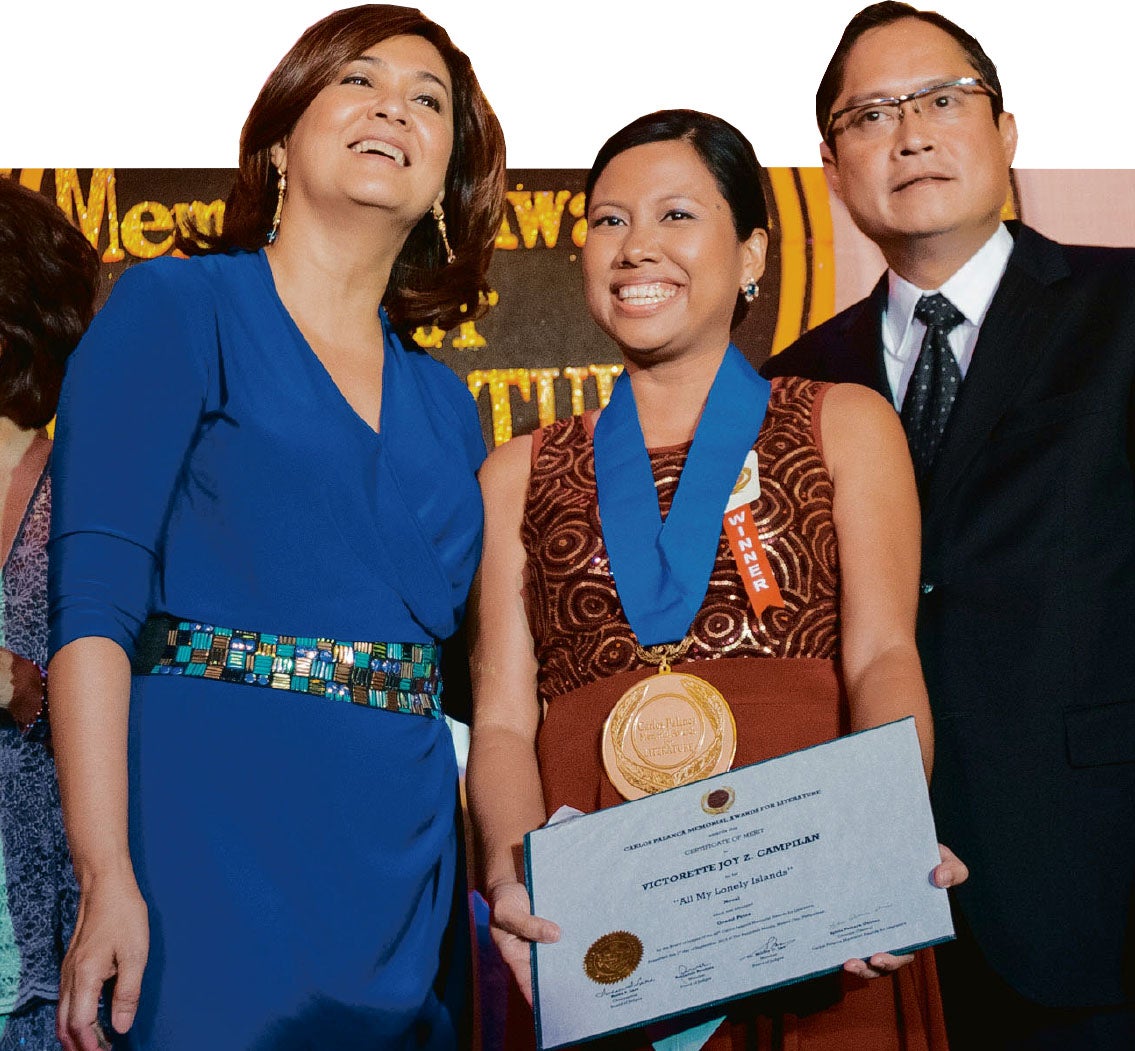 SEPT. 1 is a date set in the stars—as in literary stars. The yearly awarding ceremony for the Carlos Palanca Memorial Awards for Literature is many things: rite of passage for aspiring writers; reunion of past winners; and basically a feel-good opportunity for those who adore the written word in the Philippines.

Palanca Awards night has always been about the old—the former winners boasting unmatched literary wattage—and the new—first-time winners ushered from promise to prominence. The 65th Palanca Awards, held at the Rigodon Ballroom at the Peninsula Manila, emphasized that brilliant balance.

Guest of honor and recipient of the Gawad Dangal ng Lahi, poet and literary critic Dr. Gémino H. Abad, celebrated that exact union in his speech.

“The community of writers, local and global, is a stirring image of authentic democracy,” Abad said. “For there are only writers and writers with various styles of writing who respect each other’s person or work, writers who are better known and more esteemed than others, writers who are not known as yet and aspiring writers.

“Every writer is his or her own individual self. No one at all, nor any group or coterie, can impose in the writer any theory, any ideology, any way of crafting the literary work. No hegemony, no dictatorship can ever prevail among writers.”

National Artist for Literature F. Sionil José spoke of the Palanca Awards’ unique endurance. “To the best of my knowledge, there is no such award that has lasted this long in the region and Southeast Asia. It is a great boon even if our leaders are not interested in the arts.”

In her sponsor’s remarks, Criselda “Dang” Cecilio-Palanca described the night’s gathering as “an expanding clan of several families joined together by the special bond of true kinship.” She spoke about how the Palanca Awards have reflected Philippine society. “It is the essence of this sharing of the past, present and future that remains immutable, that does not change, but continues to give people a heightened consciousness of who we are.”

Cecilio-Palanca proudly stated that this year’s awards saw 895 entries over 22 categories. The 57 winners featured 33 first-time winners. “That can only mean that new talents outnumber the veterans, at least for this year,” she said. She brought the audience’s attention to the winners of the prestigious biannual Grand Prize for the Novel, both of whom were first-time winners, young and female. “A couple of millenials” have won, she said. “How much happier can we be?”

Victorette Joy Z. Campilan, 32, is a business writer for Innodata. She is the author of the winning novel, “All My Lonely Islands,” which she describes as a coming-of-age story of the protagonist Crisanta. It took her all of four months to complete her winning entry—she described the experience of winning as “unbelievable.”

The winner of the Nobela is even younger. Charmaine Mercader Lasar is a 20-year-old accounting student at Lyceum of the Philippines University-Laguna. Her novel, “Toto O.,” revolves around a child’s unique perception of the world around her. “I’m really thankful,” Lasar said. “I never expected it.”

Among the first-time winners were two with writing ties to the Inquirer. Brylle B. Tabora, a regular contributor to the Inquirer’s Arts & Books section, won Second Prize in the Dulang Pampelikula category for his screenplay “Sekyu.” Tabora described his experience as being “surreal.” A self-admitted “workshop baby,” Tabora said his screenplay gestated in Rodolfo “Jun” Lana’s screenwriting workshop, and it was “a confluence of everything I’ve learned.”

Patricia Celina A. Ngo was published twice in the Young Blood column before she won Second Prize in the Poetry Written for Children category for “Ordinary Adventures.” The management engineering student at the Ateneo de Manila University said it’s been “a dream since grade school” to win a Palanca Award. First-time winners also had one more thing in common: They all pledged to submit entries in future Palanca Awards.

Headlining the returning winners was Alexis “Exie” Abola, a contributing reviewer for the Inquirer’s Theater section. Abola won First Prize in the Short Story in English category for “Phallic Symbols.” This is the third First Prize for Abola and his fourth Palanca Award.

Another popular winner was fictionist Lilia Quindoza Santiago, who won Second Prize in the Maikling Kuwento in Filipino category for “Mag-ambahan Tayo,” her eighth Palanca. There were the prolific Palanca Hall of Fame awardees who continued their winning ways: Peter Solis Nery and Edgardo B. Maranan, whose Second Prize in the Dulang Ganap ang Haba was his 35th career Palanca Award.

Winners were surrounded by their friends and family. Budget Secretary Florencio “Butch” Abad was among the guests for poetry winner Paderna, who works at the Department of Budget and Management.

Like that rare alignment of celestial bodies, the 65th Palanca Awards night boasted prodigy and the past, talent and tomorrow, friends and colleagues. It’s about the good, inclusive and powerful in the continuing canon and camaraderie of Philippine literature—the promise of “See you next year.” It is as Abad concluded in his speech: “Without language, without imagination, we would have no memory, no history, no culture, no civilization.”