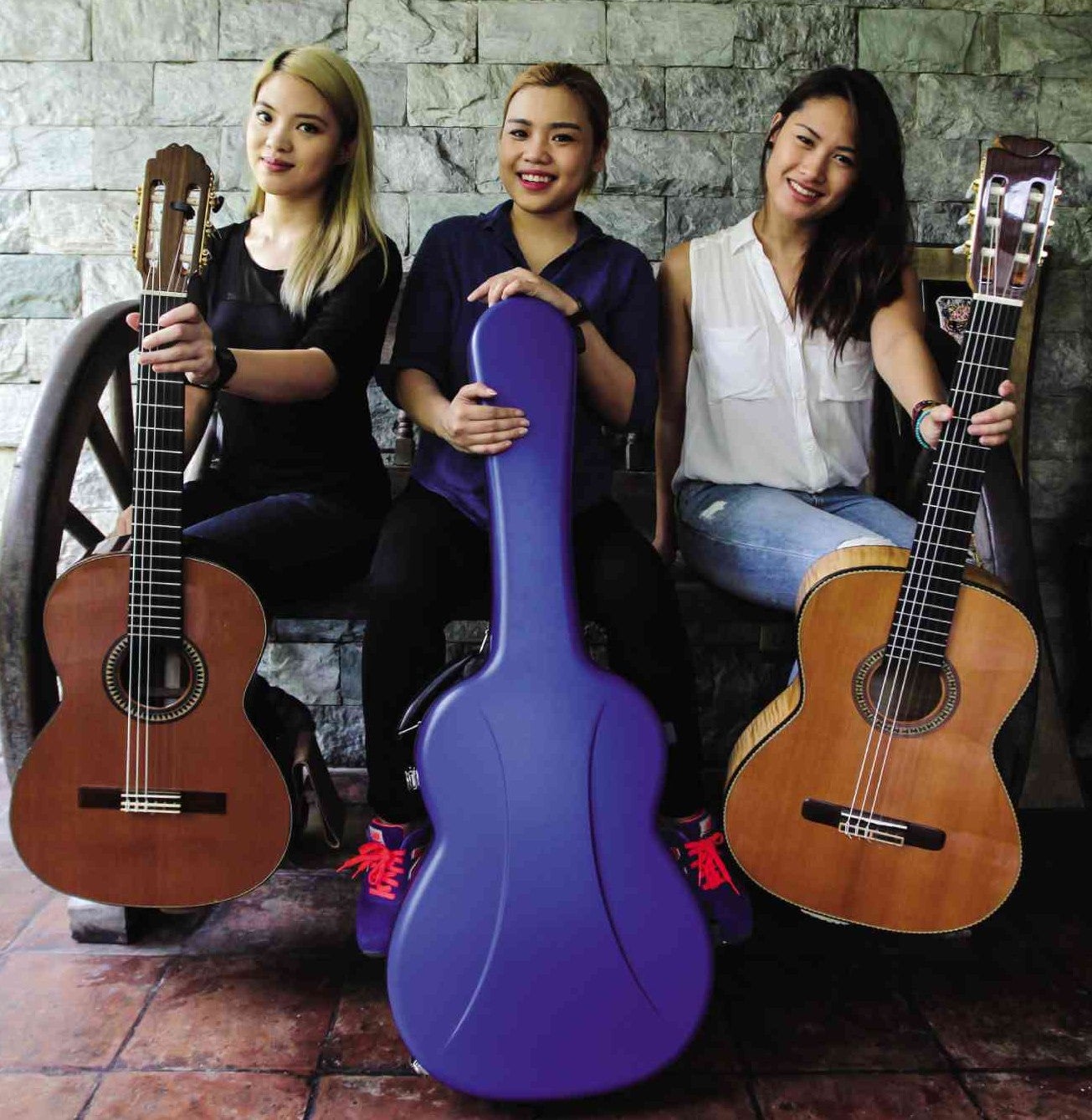 Guitar girls are making sweet music in a man’s world

In my old collection of vinyl, now long gone, was an LP called “The Best of Liona Boyd.”

Nowadays, it’s routine for attractive female classical musicians to pose for revealing photographs on their album covers. Violinist Lara St. John posed topless for an album of Bach compositions and even violin virtuoso Anne-Sophie Mutter has to show a bit of cleavage. But “The Best of Liona Boyd” was pretty risqué in 1982.

When you actually listened to the record, Boyd turned out to be an awesome guitar player, with flawless technique and great interpretive skill. She had studied with some of the elder gods of the classical guitar—Andrés Segovia, Julian Bream and Alexandre Lagoya, among others.

The point is, like cod liver oil, classical music is supposed to be good for you, but for the casual listener, a little bit of eye candy goes a long way in helping it go down. Hence, the phenomenon of hot girls sexing up the classics—like the string quartet Bond or violinist Vanessa-Mae, to name just two—in order to cross over to the mainstream audience.

One might be tempted to lump Triple Fret under this category—three attractive young women, who also know how to work a cocktail dress, playing classical guitar. But there’s more to them than just the eye candy.

The trio of Jenny de Vera, Iqui Vinculado and Marga Abejo also imbue the classical guitar repertoire with plenty of brio, winning the hearts and ears of guitar aficionados and casual listeners alike.

The infectious passion with which they approach the classical guitar has won the group a devoted following since they formed in 2011.

They’ve been pretty busy, for a classical music ensemble, playing live once or twice a week in non-traditional venues, such as the Conspiracy Café, My Brother’s Mustache and City of Dreams Manila—one of the very few classical music groups to cross over to the mainstream audience.

“Our aim is to expand the audience for the classical guitar,” says De Vera. “To reach out.”

To this end the trio has varied the traditional classical guitar repertory of Spanish compositions and transcriptions of Baroque and Renaissance pieces with instrumental arrangements of kundiman, Braziliana and contemporary stuff such as Queen’s “Bohemian Rhapsody” and the Eagles’ “Hotel California.”

“We don’t make a set list before gigs because we want to see the kind of audience we’re playing for, the age group they belong to and then we choose from the repertoire so they can have maximum enjoyment,” says Abejo.

“When you’re on tour, it can get complicated,” adds Abejo.

Thus, Triple Fret, Mark 1, was born in 2011, the name a play on the phrase “triple threat.” When the third member left to pursue other projects, De Vera and Abejo had to look outside UP for a replacement. They didn’t have to look hard: Vinculado kind of stood out as the only female guitar major at University of Santo Tomas.

Building on the repertoire they had learned with the UP Guitar Orchestra, the trio also worked with arranger Jeffrey Malazo to develop signature pieces.

The classical guitar, while relatively easy to learn, is a difficult instrument to master, requiring long hours of practice, just to develop the manual dexterity needed to play the pieces. With their smaller hands, women are at a disadvantage from the start, and for this reason have to work twice as hard. There was also the issue of gender bias to overcome.

“It took a few years,” says Abejo. “It’s a very macho instrument. We had to prove ourselves through a lot of hard work for people to believe that we didn’t just become popular because we’re girls. We took a lot of master classes, we had countless lessons, we joined competitions, we went on tour.”

The fact that Triple Fret are easy on the eyes certainly helped get them invitations to play, but once on stage, the girls had to deliver. Thanks to gruelling practice sessions—up to five hours a day as a group, plus a few extra hours on their own—the trio developed the requisite skills to acquit themselves.

The Internet and social media also helped establish the group, since the classical guitar community is a global network of tiny enclaves and cults. The international festival circuit is the only chance the tribe has to gather and eyeball each other.

In the last couple of years, Triple Fret has circumnavigated the globe, playing in Brunei, Indonesia, Malaysia, Thailand, Hong Kong, Japan, the Netherlands, Switzerland, Luxembourg and Turkey, in each case winning over new audiences.

They even managed to conquer Spain—the birthplace of the guitar—when they played to a full house at La Beneficencia in Valencia.

Back home they’ve released their first independently-produced album, “Gitara Filipina,” a signature blend of Baroque, Spanish and Filipino pieces. They plan to record a second album later this year for EMI Philippines—one of the rare instances when a major label takes an interest in classical musicians. The second album will feature classical guitar arrangements of OPM favorites.

Although all three also teach private guitar lessons on the side, Triple Fret is a resounding success by classical music standards, with regular gigs and recordings. It’s still a far cry from the kind of financial success that pop groups enjoy, but then, it’s never been about that for the group.

“I don’t see myself being a pop star,” says Abejo. “That would just kill me inside and I’d be depressed. With this kind of music, I’m happy. It’s more interesting and deeper.”

“It’s about the music, it’s not about us,” adds Vinculado. “If we manage to influence and inspire the audience, then we’ve done our job.”