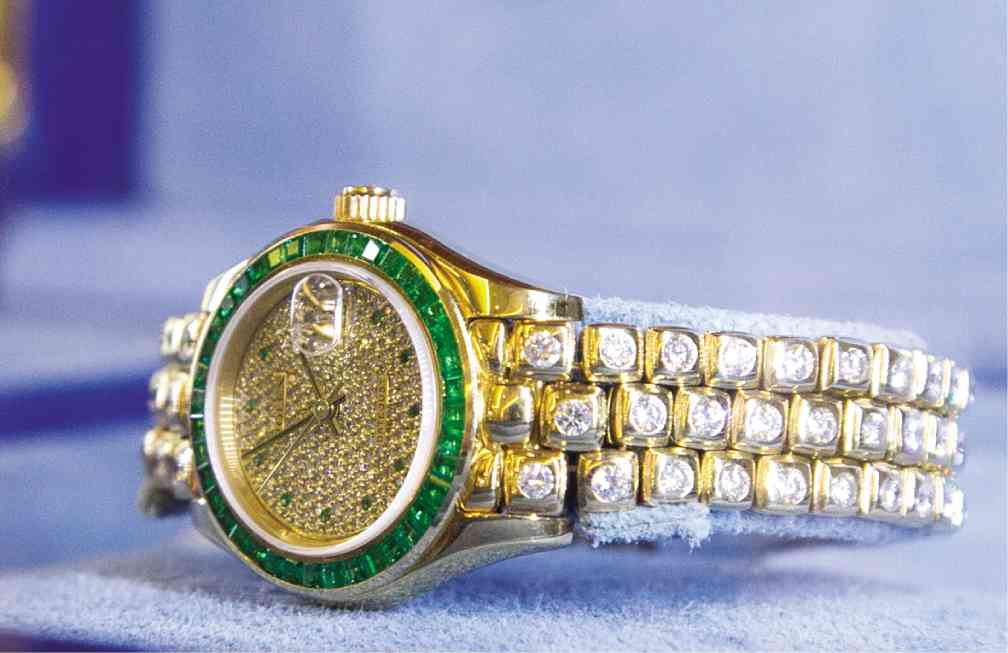 Even estate jewelry and timepieces are now auction favorites

Some 200 lots of fine jewelry and timepieces will go on the block on Sept. 20, when Salcedo Auctions concludes “A Well-Appointed Life” at the Rockwell Tent in Makati, the six-year-old auction house’s biggest collection yet of artworks and other treasured collectibles aimed at local connoisseurs and collectors.

The increase in number of fine watches and estate jewelry in this auction also signals that Filipinos are beginning to take to the idea of selling their diamonds and gold jewelry in auctions, a relatively new concept in the Philippines, according to Ramon E.S. Lerma, art advisor and cofounder of Salcedo Auctions.

Like many auction houses, Salcedo Auctions began offering just artworks, but Lerma said he and his wife (and company president) Karen Kua Lerma actually started the business with the purpose of auctioning jewelry.

Early in their marriage, the Lermas lived in Sydney, Australia, where Karen studied diamond grading. In fact, the couple used to go to auctions abroad mainly for the jewels.

When they returned to the Philippines and set up the business, the Lermas decided to combine their individual expertise—Ramon, or Richie, is an art academic who teaches part-time at Ateneo de Manila University. He used to be the director and chief curator of Ateneo Art Gallery.

Auction houses were a new concept here; when they registered the business, it fell under no category, so that they had to tick off the “Others” box.

Soon the Lermas found that, while Filipinos understood the sale of art in auctions, they were more hesitant with their jewelry. It was a challenge to get people to understand that when they bring their baubles for auction, the appraisal isn’t always as high as the price they paid in, say, a Cartier boutique, Lerma said.

Appraisals, he explained, are typically based on the current market price for gold or diamonds, and their grade. The brand is just an added premium.

“And you know of older generations, they were used to big stones; for them, the bigger, the better, even if there were inclusions,” Lerma said, referring to the carbon trapped in the diamond, considered a flaw by diamond experts.

“They thought that inclusions were proof that the diamond was real, when, in fact, an inclusion lowers the value of the stone, he added. “That has been our mission also, to teach them to accept the international standards, that we have to value a piece of jewelry the way the world does. They need to accept that an auction is a secondary market, so items can’t command the same price as when they bought it firsthand at a store.”

This auction season seems to prove that the Lermas are succeeding on this front.

READ ALSO: LONG-LOST LUNA, FOUND IN ARGENTINA, GOES UP FOR AUCTION IN MANILA

While they started offering jewelry in 2012 only from their network, satisfied clients have helped promote the category, such that the auction house no longer needs to seek them out.

People wanting to divest of their jewels have no other outlet, Lerma noted. “Traditionally, they would bring them to their alajera, where it could sit for a long time. In an auction house, you’re sure that it will be displayed and offered to buyers at a particular time.”

“It’s the same with art,” he added. “People who wanted to sell used to bring their art to a gallery. But the gallery won’t prioritize it because they have their own inventory. At an auction, you’re sure that it’s marketed and exhibited.”

The Lermas have also since partnered with watch and car expert Paolo Martel as they expanded on the category. When they first offered rare autos last year, they sold three of the seven cars at the auction, a good start for the new segment. The three cars on offer this season—including a vintage BMW and a Shelby Mustang GT 500—are displayed around Rockwell.

After several years of successful runs with art and some jewelry, “we were primed” to expand to other categories, Lerma said.

“These jewelry that come to us, many of them are estate jewels that have been sitting in the owners’ vaults for a long time,” Lerma said. “They don’t wear them because these probably don’t fit in their lifestyle. Now they see that they can use the cash to invest in other things, probably on another business or on things that they like and enjoy.”

Others also sell because it’s an inheritance and they need to divide the proceeds.

“And people buy because there’s a growing affluence, and jewelry is a great marker of success. It’s not just old money that’s buying, there are also many young professionals,” he said.

The state of the economy doesn’t significantly affect the auction business, said Lerma, as people sell when they need cash, but also collect when they’re flush. “It’s cyclical.”

For potential jewelry and fine watch buyers, an auction house is a good place to start because you can find prized items at a relative bargain, said Lerma. Those headline-making hammer prices are the exception, more than the rule.

“If you buy from a store, 70 percent of what you pay for is brand and marketing, because you pay a premium for the brand,” he pointed out.

In fact, he added, the Lermas’ first acquisition at a Sydney auction was a pair of Bulgari diamond earrings for A$1,000. The starting bid was A$800. When they brought it to a Bulgari store, they learned that the piece was worth A$8,000.

Salcedo Auctions does not set a minimum value for consigned pieces, unlike in big auction houses abroad. “The aesthetic merit is taken into account, the design and craftsmanship, because not everybody can afford big, big stones,” Lerma said. However, they accept only 18k gold or platinum, no lower, and fine stones.

“Once you entrust them to us, they’re insured,” Lerma said. “We want to develop this category as venue to unload. It’s the same as art, it’s reassuring.”

The fine jewelry and timepieces, as well as artworks and other antiquities on offer in “A Well-Appointed Life” can be seen at a preview gallery in Kirov Lounge, Rockwell, Makati. The items will be auctioned on Sept. 19-20 at Rockwell Tent.