An enchanting ‘South Pacific in Concert,’ thanks to an enchanting leading lady | Inquirer Lifestyle ❮ ❯ 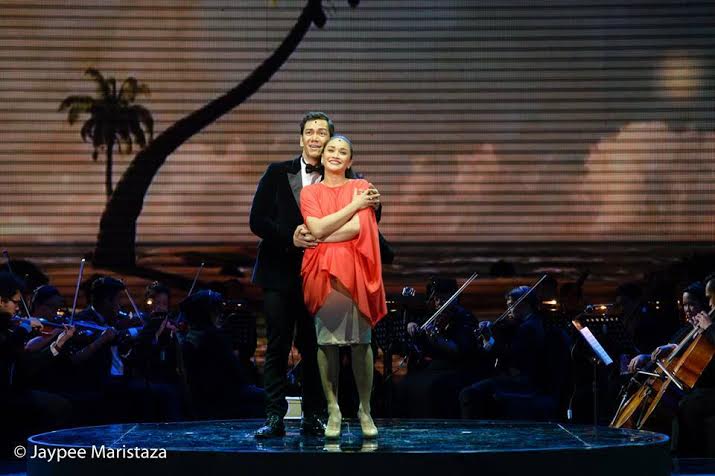 She has dreamed a dream in time gone by as a prostitute in 19th-century France; climbed trees, scraped her knee and torn her dress as a freewheeling nun in Salzburg, Austria; and danced on the last night of the world with her American GI in wartime Saigon.

Now she’s on an island in the Pacific, “a cockeyed optimist, immature and incurably green,” and don’t be surprised if you find yourself falling in love with this wonderful gal as the night wears on.

Such is the sweeping charm of Joanna Ampil, eminent star of the West End’s “Miss Saigon” and “Les Misérables,” who gives a performance of crystalline delicacy and unbridled buoyancy in Resorts World Manila’s concert presentation of Rodgers and Hammerstein’s Pulitzer Prize-winning “South Pacific,” directed by Menchu Lauchengco-Yulo.

The musical, last staged in Manila in 1997 by Repertory Philippines, is a map of two love stories on a South Pacific island in the midst of the Second World War: that of Nellie Forbush, a self-confessed hick of a US Navy nurse, with the French plantation owner Emile de Becque; and that of Lt. Cable with the virginal islander Liat, who is disturbingly paired with the former by her scheming mother Bloody Mary.

For two nights only (it plays its second and final show tonight), Ampil sings the part of Nellie. Yet, not for a minute does she make it seem as if she’s only there to hit those notes. Employing the most convincing Southern accent we’ve heard in the theater of late, Ampil locates a deeply humanizing core in the character, and the result is a perceptively shaded portrait of a woman who can be schmaltzy lover, animated friend and prejudiced stranger all at the same time.

It is largely to Ampil’s credit that this discreetly abridged staging of “South Pacific” feels as if it were the real thing. Her Nellie is all flesh and burbling blood, and the subtly lacerating work she puts into the first act’s final scene, when Nellie discovers Emile’s past relationship with a Polynesian woman and her bigoted side surfaces (“Colored!” she exclaims), erases any sliver of doubt that somebody else could possibly do the role, should the producers decide to put on the real thing.

Ampil finds an able match in opera singer Jon Meer Vera Perez as Emile. Though he tends to scrunch his face too much to convey expression—unfortunately captured all too clearly by the tawdry video projections on both sides of the stage—Vera Perez is nonetheless a commanding presence, alluring and faintly vulnerable.

And boy, does the music soar with his voice; his “Some Enchanted Evening” and “This Nearly Was Mine” are two of the show’s genuinely thrilling numbers.

Meanwhile, Ima Castro cuts a voluptuous, if slightly youthful, figure as Bloody Mary. But her performance makes you wonder at the possibilities that the likes of Sheila Francisco (who played the role to acclaim in London’s National Theatre in the early 2000s, and can be heard in that production’s cast recording) could have realized.

Castro is not at all inadequate; she’s just  underwhelming, lacking in heft and power, and while she exudes the character’s air of lecherous mystery—a trait that could imaginably work to her advantage in a full-on staging—her remarkably high vocal range never really finds complete comfort in the score.

It isn’t any better for Mark Bautista as Lt. Cable. A pop star by nature, he was a dashing delight in Resorts World’s “Bituing Walang Ningning,” one of the few pleasures to be had in that otherwise deeply problematic production (but let’s not get carried away now).

But here, where the score leans toward traditional Broadway and, occasionally, the near-operatic, Bautista is visibly uneasy with the sustained notes, the lack of wiggle room for riffs and bends, and sadly, yes, even his character’s few high notes.

That is unfortunate, because Rodgers’ music has never sounded richer, more luscious, more alive, than in the sumptuous playing by the Manila Philharmonic Orchestra under the baton of Rodel Colmenar. A particularly ingenious moment during the overture hints at the dark underbelly of this deceptively sunny musical, when the lilting strains of “I’m in Love with a Wonderful Guy” are contrasted with images of skyrocketing bombs and mushroom clouds on the LED screens onstage.

The ensemble, too, does fine vocal work (and curiously enough, they seem to have crossed over en masse from Dalanghita Productions’ earlier smash musical “Kung Paano Ako Naging Leading Lady”).

If there’s any displeasure to be had in this concert, it is the sound. You’d think, given that this is only a two-night affair—and a concert at that, where the voices, the singing and the sound should be the focus—that they’d have somehow perfected all the acoustic elements.

Yet, opening night was marred by mic scratches and irritating reverb and infuriating audio feedback. Ampil even had to do her first scene with a handheld microphone, which came several inaudible lines too late. But this seasoned pro carried on as if nothing were wrong and never once struck a false note.

If this “South Pacific” makes for an enchanting evening in the too-capacious Newport Performing Arts Theater, it is, for the most part, thanks to its enchanting leading lady.