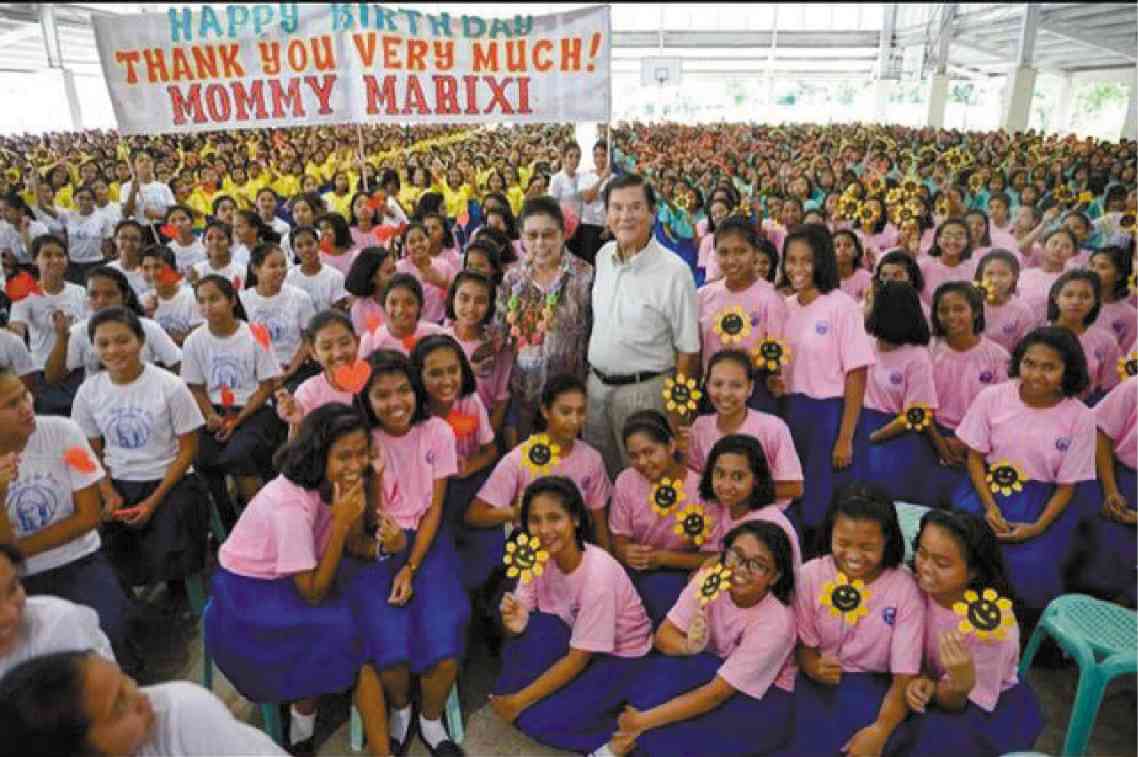 What can be more heartwarming than listening to 3,000 students of the Sisters of Mary Girlstown singing and greeting your mom a “Happy Birthday”?

In an amazing display of warmth and affection, the high school girls delivered a moving performance dedicated to my mother and chair of Philippine Daily Inquirer, Marixi Prieto, who was celebrating her 75th birthday.

The Sisters of Mary is the favorite charity of MRP, as she is known in business circles. She has been donating to them for almost two decades. The Sisters provide a live-in, secondary education for the marginalized poor of our country.

The school is maintained and supported mainly by donations, gifts and bequests coming from noble, selfless and well-meaning persons and entities, local and foreign.

The founder, the late Rt. Rev. Msgr. Aloysius Schwartz, came to the Philippines on the invitation of Jaime Cardinal Sin, then archbishop of Manila, to establish Boystowns and Girlstowns like those in South Korea.

After seeing the plight of our depressed, deprived and oppressed sector of society, Father Al decided to give in to the request of the good cardinal.

Father Al started his programs in Manila, then in Cebu and Cavite. In 1983, he was bestowed the Ramon Magsaysay Award for International Understanding.

The Sisters of Mary of Banneux is the religious congregation founded by Father Al, and in our country, their schools house and educate around 12,000 boys and girls annually.

The school operates on a year-round basis with only two weeks’ vacation. The happiness of everyone connected to the school was evident during mom’s birthday celebration, which started with a Mass, followed by a small lunch and capped with a short presentation from the students and the nuns.

After the wonderful celebration, we headed to Tagaytay Highlands to play a fun round of golf before enjoying a relaxing weekend on the beach.

We continued the September birthday celebrations with our eldest son Bryan Prieto’s 30th birthday with a totally ’80s disco party.

To surprise Bryan, we got the very hilarious improv group SPIT to perform.

As he is quite a techie, Bryan was gifted the latest Samsung Galaxy Note 5 that was recently launched along with the Samsung S6 Edge+ at the SMX in SM Aura, BGC.

Samsung once again rolled out its exclusive S Carpet, this time calling it “S Carpet: Fashion & Inspiration.” Always full of surprises, Samsung gave the esteemed audience a fashion show in collaboration with the Fashion and Design Council of the Philippines (FDCP), and a milestone to witness with the first-ever Noteworthy and Edge Maker Awards.

The fashion show featured three collections. The White Pearl Collection was a tribute to the blank canvas that the designers start with, as well as the ultimate productivity that the Galaxy Note 5, with its all-powerful S Pen, provides its users.

The Silver Titanium and Gold Platinum Collection, reflecting the elegant glass and metal finish of the Galaxy S6 Edge+, showcased designs by Jerome Ang, Joel Escober and Ramon Esteban, to name a few.

To end the show, the Terno Collection served as a fitting tribute to modern Filipino creativity. Included in the collection were pieces by the master designers that also served as a testament to the beautiful outcome of the merging of fashion and technology.

Aside from the Samsung X FDCP Fashion Show, the multinational conglomerate also recognized the fashion and art industries’ best of the best.

Recognized for his unmatched achievements and one-of-a-kind creations, Inno Sotto was given the first-ever Samsung Noteworthy Award.

Today’s trailblazers were also recognized for their great contributions, which continue to shape and influence their respective fields for the better.

With Samsung, the line between fashion and technology blurs as it wonderfully merges to bring about extraordinary innovations that cater to every individual who dares to live big.

With the Samsung Galaxy Note 5 and Galaxy S6 Edge+, it pays to be daring and to go for bigger things in life.

Check it out at Samsung Experience Stores and at www.nextisnow.ph.

From gadgets, let me segue to vintage fine jewelry and timepieces. Today is the final day of Salcedo Auctions’ “The Well-Appointed Life: An Auction Weekend” at the Rockwell Tent. The second day pays tribute to collecting passions with Fine Jewelry & Timepieces and Rare Automobiles.

It is presented with the support of Lexus, Rockwell, Philippine Tatler and Credit Suisse.

I am delighted to announce that Piaget is one of our major sponsors in this year’s Red Charity Gala where they will be auctioning a timepiece for the benefit of the Philippine Red Cross.

This coming week is all about arts and culture. From Sept. 23 to 27, Manila theater fans will have the chance to watch “La Soiree,” an Olivier award-winning cabaret show.

The box-office-smashing international sensation is coming to Manila for a limited run at The Theatre at Solaire.

“La Soiree” in Manila is presented by Lunchbox Theatrical Productions and Concertus Manila.

Art lovers are invited to “On Ritual Presence,” a six-artist show at Patio Vera Restaurant, 70 Gen. F. Santos St., Marikina, on Sept. 26, 6 p.m. The unconventional artists are Jethro Jocson, Eden Ocampo, Katrina Pallon, Arnel Ramiscal, Doris Rodriguez and Christine Sioco. Cocktails will be served on opening night and the show will run until Oct. 31. Everyone is invited to partake of the visual feast.