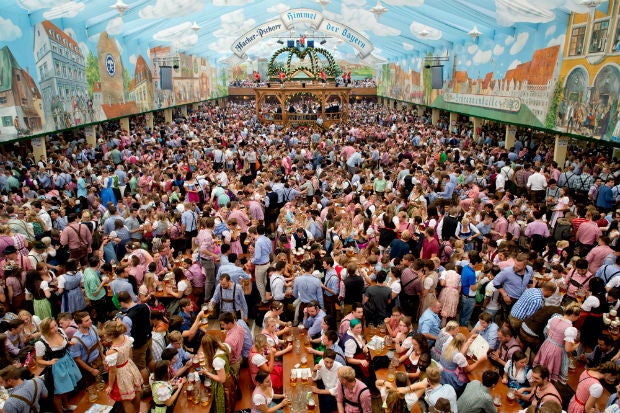 Migrants are now being picked up at the Austrian border and put on buses and trains to other German regions, most now bypassing Munich, where some 6,000 asylum-seekers are housed in temporary shelters.

“The situation is more relaxed than it was in recent days,” federal police spokesman Wolfgang Hauner said.

Bavarian Interior Minister Joachim Herrmann, who had warned of a potential culture clash between Muslim refugees and beer-swilling merrymakers, appointed a migration crisis team on the eve of the event.

Police have deployed 500 officers at the sprawling Wiesn fairgrounds, and mounted a security operation at the main railway station to keep drunken party-goers apart from arriving migrants.

Visitors from around the world wear the traditional Tracht, sometimes hastily bought at a vendor’s stand: lederhosen (leather shorts) and embroidered braces for men and dirndls, pleated smocks worn with low-cut blouses, for women.

Both are designed to expand to accommodate an expanding beer belly.

Mexican Gabriel Estrada, 49, arrived early Saturday in warm, sunny weather decked out in full Bavarian regalia along with his wife and 22-year-old son.

An engineer for luxury automaker BMW, Estrada said that Munich residents have largely made his family feel welcome during their three-year stint in the city.

“We love the tradition here, everyone all dressed up — it’s a real people’s party,” he said.

But his wife Beatriz, 48, said that many in town seemed on edge over the refugee influx.

“There are a lot of scared people — they don’t know how things are going to go and worry there could be attacks,” she said.

A planned anti-migrant rally at the railway station in the early evening drew only around 20 people, and was drowned out by a larger group of mainly local far-left counter-demonstrators chanting, “Say it loud, say it clear, refugees are welcome here!”

A spokesman for the volunteers helping to process the new arrivals at the station, Colin Turner, said he expected the numbers to increase again dramatically after the event ends on October 4.

“They can’t keep the border checks in place for ever,” he said.

“Of course they redirected people so they wouldn’t come during Oktoberfest but having them arrive on trains in larger groups to Munich actually helps us coordinate our assistance.”

Although Oktoberfest began 205 years ago, this year marks the 182nd edition as the party was cancelled during two world wars, two cholera outbreaks, Napoleon’s invasion of Bavaria and the hyperinflation of the 1920s.

Prices for a “Mass” or large glass of beer have soared by more than one third over the last decade and now set drinkers back between 10 euros ($11.40) and 10.40 euros.

The event was originally held in October as the name suggests to celebrate a royal wedding but was brought forward by one month to take advantage of better weather.