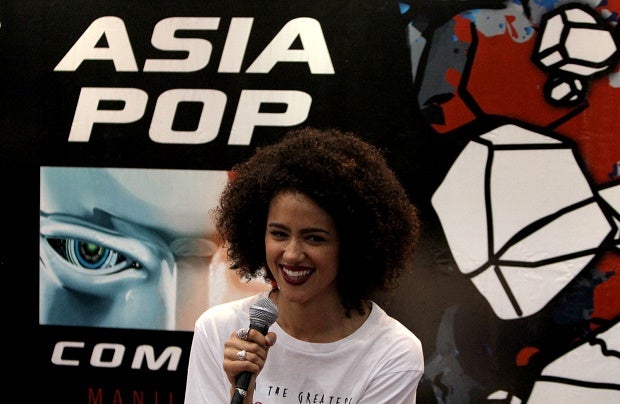 Game of Thrones star Nathalie Emmanuel greets the members of the media during the AsiaPop Comicon (APCC) Manila 2015 at the Wolrd Trade Center in Pasay City. INQUIRER / RICHARD A. REYES

Manila now holds a special place in “Game of Thrones” star Nathalie Emmanuel’s heart. It is, after all, the place of her first guesting in a comic convention. And it is only fitting that she shares this first with Filipinos, who, this year, also eagerly waited for the AsiaPOP Comicon brand to hit Philippine shores for the first time.

“This is my first comicon ever. I’ve never done this before and I got to do it here with you guys so thanks for having me. It’s been really special,” Emmanuel told the press on Saturday (September 19).

Emmanuel, whose breakout role was Missandei (right hand of sorts and confidant to khaleesi and ‘Mother of Dragons,’ Daenerys) on television hit “Game or Thrones,” made her film debut when she starred in the seventh installment of the “Fast and Furious” franchise.

“I’ve been so lucky because I’ve joined Game of Thrones, Furious 7, and Maze Runner and they’re quite an established group of people,” said Emmanuel.

“I’m really lucky to work with really sweet people who’re just like, ‘Oh, so you’re one of us now.’ It’s so easy because they’re lovely people and you can’t really ask much more than that.”

But while the English actress couldn’t stop gushing about her co-stars, Emmanuel didn’t budge when asked to spill the beans about the sixth season of “Game of Thrones.”

At one point, a playful Emmanuel shot back at audiences who were asking for a few teasers: “You’d like for me to tell you, wouldn’t you?”

Although not one juicy detail was uncovered about the series’ upcoming episodes, Emmanuel did talk about what fans could expect from Missandei, Grey Worm, and Tyrion as leaders of Meereen.

“This season’s really exciting. It’s got a lot of momentum and we’re left with Peter Dinklage (who plays Tyrion) on our team so we’re seeing a whole new dynamic with that group, which only Tyrion can bring, I think. So that’s going to be fun to watch,” Emmanuel noted.

And as if the actress wasn’t being vague enough, Emmanuel immediately clammed up at the mere mention of Jon Snow.

“I have no answer, sorry to say,” Emmanuel said, her smiles giving nothing away when asked if she had seen any recent material on Jon Snow (played by Kit Harington).

Later on, Emmanuel revealed that she, too, was familiar with the insatiable thirst for clues of what’s to come — especially when left with a cliffhanger. The actress was a fan of the show even before she bagged the role of Missandei.

“I’m so hardcore. I mean, I came in season three, but I watched from the beginning, religiously,” Emmanuel said.

Now that she’s part of the show’s cast, Emmanuel gets to indulge even more as a fan of “Game of Thrones.”

“I often get so excited about other people’s storylines. I’ll be reading scripts and it’ll be about Arya or whoever and I’ll be like, ‘Oh my God.’ And that’s the coolest thing about being on the show…I get to follow other people’s stories as well.”

But as far as following certain storylines on “Game of Thrones” goes, Emmanuel jokingly gave audiences some advice, given the show’s infamous unpredictability when it comes to its characters and their life spans.

“I think the key is not to like anyone and don’t get attached.”

Fans can catch Nathalie Emmanuel and other Hollywood stars at the AsiaPOP Comicon Manila 2015 until Sunday (September 20) at the World Trade Center in Pasay City.