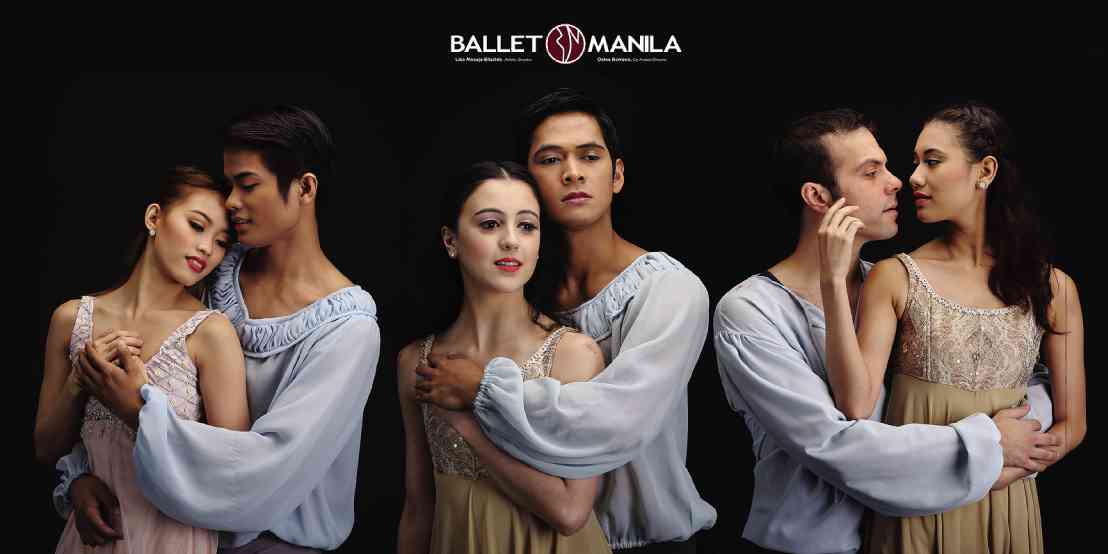 Touted as the most well-loved ballet created in the 20th century, “Romeo and Juliet” has caught the public’s imagination with its dramatic score by Russian composer Sergei Prokofiev and stirrin interpretations by many choreographers.

From Oct. 2 to 4 at Aliw Theater, Ballet Manila (BM) will premiere Paul Vasterling’s version. It is restaged by BM’s managing director, Christopher Mohnani, who had essayed Romeo when he was principal of Nashville Ballet.

Vasterling had many sources for his creativity. He was moved by the romanticism of Franco Zefirrelli’s 1967 movie of the same title. “It had many wonderful motifs, beautiful people and a plot about innocent love becoming more passionate leading to a tragedy,” he recalled.

Then there was John Cranko’s choreography which was characterized by a seamless and accessible plotline, powerful dramatic composition, well-established characters and choreographic variety. It set the standard for future versions.

Vasterling found Prokofiev’s music very compelling. Prokofiev originally wrote the score for the Kirov in 1935. However, he tolerated five years of artistic meddling and political censorship before seeing the Kirov premiere in 1940.

“It’s a wonderful story! The music is unusual in its harmonics,” said Vasterling in a Skype interview. It’s rhythmic, classical and contemporary-way ahead of its time.” The music is delineated for the choreographer.”

The score offers many memorable themes: The eclectic “Dance of the Knights” in the Capulet ball is march like then foreboding and, at some points, serene. “Juliet’s Variation” shows her shift from sweet innocence to mischievousness. The famous “Balcony Scene,” with its ascending melody, oozes with intimacy, longing and subtle sensuality. The dark, tragic atmosphere in Juliet’s funeral echoes the strains of the balcony scene when Romeo visits her crypt.

Prokofiev used irony by using contrasting musical styles to reflect the tragedy of two forward-thinking teenage lovers who were hindered by rigid conventions of society and family.

“Romeo and Juliet” is Vasterling’s second contribution to Ballet Manila’s repertoire. He first came to BM in 2000 to stage “Dracula.” The choreographer was impressed with BM’s high technical standards and diligence. He cast Mohnani in the title role and consequently invited him to join Nashville Ballet.

In 2004, Vasterling set out on his own version of R&J with Mohnani and Rachel Ellis in the title roles. Asked why he choreographed the ballet on Mohnani, Vasterling explained, “He was an amazing actor. He melded the steps with theater, and he’s a good partner.”

Vasterling sought dancers who could infuse meaning into their movement. Aside from his depth of characterization, Mohnani exuded strong stage presence. “When I make work, it’s collaboration with the dancers who create their role,” said the choreographer. The choreographer made his dancers watch Zeferreli’s movie, read Shakespeare and discover their character’s motivations.

Mohnani recalled, “I interpreted Romeo as a passionate individual; a free-spirit whose only fault was that he loved and for Juliet, so much.”

Vasterling also likes to challenge dancers and make them technically stronger with virtuosic movements and contemporary, weighty movements as a counterpoint to the aerial quality of ballet. In the famous balcony scene, the couple, especially Romeo, gets “puffy” after the series of jumps, turns, lifts and off-center partnering. Clearly, this is Romeo’s scene as he shows excitement in meeting Juliet in a forbidden tryst.

Vasterling’s works appeal to the audience because they represent the significant human experience. On the relevance of “Romeo and Juliet” today, the choreographer believed in the power of transcendence. “There is so much fighting in this world. People dislike each other for superficial reasons. Love is important. It doesn’t matter who you are or what you are. That’s what I want people to remember when they the theater.”

For all his prodigious talent, Vasterling never saw himself as a dancer, let alone a choreographer or CEO. He took up piano as a child then drifted to community theater, playing piano for the ballet. The teacher saw his potential—tall at six feet and slim-and egged him to take up ballet. Then 16, he showed up in his first class wearing jeans that had the girls laughing. Still, he bravely pursued the art.

A back injury forced him to rest. During the downtime in dance, he took up a post-graduate program on social work at the University of Tennessee. He didn’t complete program though as the ballet world called him back. “Life takes you to different directions. But I still apply principles every day,” he said.

Vasterling was named Nashville Ballet’s artistic director in 1998. Over the years, the company has been experiencing exponential growth in revenues. It has widened its outreach in the community and got more people engaged in the performing arts. The company operates with an annual budget of $5 million.

His musical background and choreographic talent enabled the company to stay within budget. He has edited the music of classical scores that allowed him to make the classics more appealing to a modern audience, and created several original works for the company instead of hiring guest choreographers.

In an interview with Bizjournal, he attributed his effective leadership to being a good listener.

Whether he’s running an organization or producing a new dance piece, Vasterling insisted that he couldn’t have done it alone but with the cooperation of his colleagues. That could be said in the making of “Romeo and Juliet.”