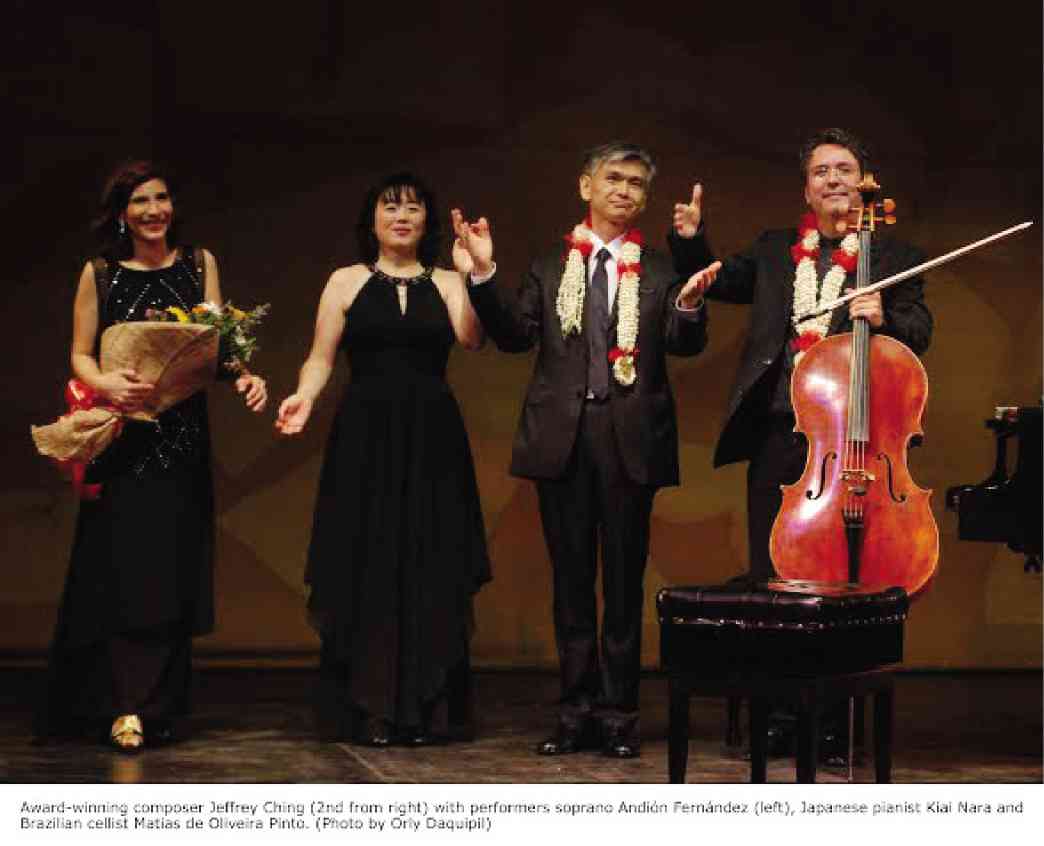 Jeffrey Ching once more made his strong presence felt on the local music scene with the staging at the Cultural Center of the Philippines of “Fusion,” which marked the world premiere of his work “Celestial-Infernal Grand Nuptial Rite.”

“Fusion” brought back the husband-and-wife collaboration of Ching and classical singer Andion Fernandez with other foreign performing artists, pianist Kiai Nara and cellist Matias de Oliveira Pinto, who together made a world-class performance. The concert elicited much glorious listening and ardent appreciation.

The composer prefaced the performance with a short remark that introduced the program as a “fusion of opposites.” The bipolar structuring of the program, with the “Celestial” as the first to be performed concluded by the arrangements of Schumann and Wagner works, reflected the same idea. Well marked was the contrast of the celestial and the terrestrial that were fused into a dynamic unity of opposites.

The first work presented practically hushed the audience in awe, digesting its esoteric, philosophical thrust. The marriage between heaven and hell, the title of William Blake poem spelled out, was expressed, indeed, in poignant sonic vocabulary.

The celestial, true to the Daoist principle that gave the work its “flavor,” was expressed in unmeasured, formless dimension; or expressed in appropriate text, save some syllabic undulations and other vocal configurations that moved spontaneously.

The piano and the cello were treated unconventionally to give unpredictable intonation, or lustrous melodic lines that they conventionally or expectedly produce.

All three performers sensitively played each part. One felt the spontaneity with which they played their parts with sensible dispatch.

The set of works in the second section was a complete departure from the first, marking the “earthliness” of its orientation. How else would one appreciate the materialism expressed in the fastidious chromatics that Wagner employed in the featured work, or the bipolar romantic moods that Schumann expressed in his works?

“Schumann’s Kundiman” revealed the composer’s creative genius. Interfacing Balagtas’ “Kay Selya,” which served as an introduction to his monumental awit, “Florante at Laura,” to Schumann’s instrumental works, was simply fantastic. It bridged two worlds in opposite polarities. In dialogic fashion, they converged on the theme of romance, universality acclaimed.

The use of the word “kundiman,” in the title aptly recognizes the meaning that the local genre sports as an “academic art” or an art song, similar to the lieder for example.

With the added text, the work becomes all the more delectable as a “life expression,” so to speak. Here, a sort of a dialogue anchored on the theme common to all mortals such as “romance” was struck. The awit soon became lieder. And why not? Balagtas’ text adequately shows erudition comparable to the texts German poets wrote for the lieder.

In a very relaxed manner Andion intoned the text with depth, displaying the rich, earthly timbre of her voice. Pianist Nara etched “Schumanesque” lines that blended well with the warm singing lines of the cello.

In the next work that capped the presentation, the tight collaborative cohesion of the three performers was all the more savored! The ensemble playing was pursued tightly, as each instruments essayed their respective lines with much elan.

The composer enriched the song cycle by adding a cello part transforming the work into a five-movement sonata. The cello part added luster to the otherwise austere piano part, serving as an added voice cohesively intertwined into the vocal and the piano parts.

Indeed, after a long while of absence, Jeffrey Ching brought home world-class works that have perked up Manila’s concert scene!