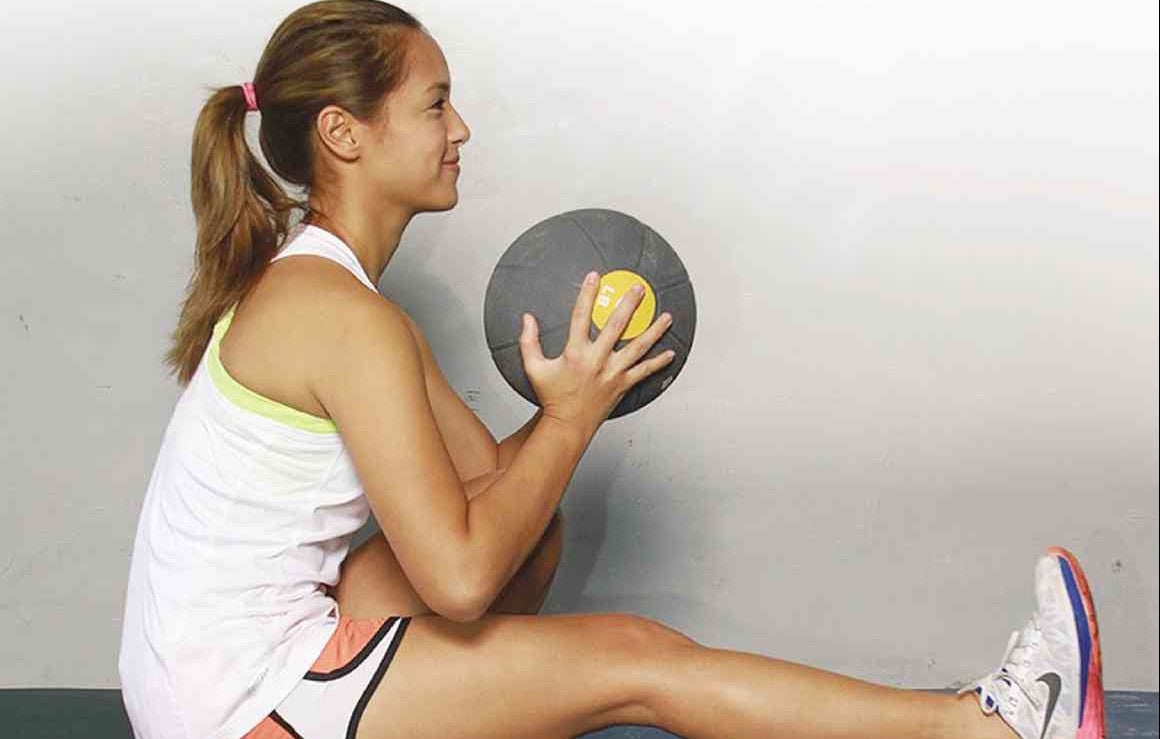 AMANDA Fernandez does a pistol squat with a counterweight for balance. PHOTOS BY NELSON MATAWARAN

The woman behind the state-of-the-art football field

STRONG-WILLED and dynamic, athlete/entrepreneur/model/emcee Maria Amanda Fernandez has one goal: to get every Filipino interested in sports.

At 27, she opened her sports and recreation facility in Mandaluyong and built a state-of-the-art indoor football field.

In male-dominated football (soccer in the United States and Australia), she formed an all-women, semi-professional team called Sikat Football Club. (“Sikat” is the Tagalog word for “shine.”)

Her daily uniform is a tank top and fashionable sports bra, shorts and colorful athletic shoes, even if she’s doing office work.

Owning a football field was a vision she’s held since she was a 13-year-old student at the International School Manila. “I had wanted to be a pro soccer player, but there were no opportunities for women,” she says.

She learned the rudiments of the sport at Makati Football School and worked her way up to the national football team.

Football in the Philippines started at the turn of the 20th century and enjoyed popularity until the Americans introduced basketball in 1910.

However, football remained popular in schools up to the mid-20th century.

In 2009, the sport had a resurgence after the Fédération Internationale de Football Association (Fifa) upgraded facilities in the country. Foreign football clubs and teams opened special schools and sent coaches over to train teams.

Fernandez wants to leave her mark through her multi-sport facility Sparta (Sports and Recreational Training Area) and football.

To achieve her goal, she had to think like a businesswoman.

FMF Development Corporation, the investment holding company started by her grandfather, former Central Bank Governor José B. Fernandez, owned a huge lot and a 1,998 square meters warehouse in Mandaluyong. She presented a business plan to turn the dilapidated warehouse into a sports facility before the board of directors composed mostly of hard-nosed bankers.

She succeeded in convincing the board to let her renovate the warehouse. Among her selling points was the high demand for football fields. Players needed more fields to practice and indoor fields during rainy days.

The board agreed to own 20 percent of her company.

Her father and board chair, Enrique, helped finance Sparta on condition that she paid back the loan with a yearly interest.

Fernandez recalls how, even in her student days, her father would set a limit. “If I asked for P130, he gave P100; I had to provide the P30. He wanted me to realize that money didn’t come easy,” she says.

Sparta must have raised the value of the property. The first phase of its development includes an indoor football field, a multipurpose room for Zumba, martial arts and candlelit yoga and 360Pro, the first athletic training gym developed by 360 Fitness Club.

“Business has been doing well,” she notes. “We’ve been getting field rentals way above the forecast. The 360Pro has been attracting our target, the athletes.”

The next phases will include a biking store, a basketball court, an indoor firing range and swimming pools.

“The vision is to transform the landscape of sports,” she says. “I want to open more clinics, hold outreach programs and boot camp classes… change the mind-set of the people and hope to get them more involved.”

Then again, Fernandez has to work double time owning, managing and leading her football team where she is either a striker or midfield.

Sikat is under the Philippine Football Federation Women’s League. “Without funds, you can’t get field space and pay for coach fees and tournament registration,” she says.

Given her Eurasian features and a toned body, she easily gets cast in commercials and sports programs. She then uses her talent fees to pay for the sport’s expenses.

The players don’t receive a salary and are lucky when Fernandez occasionally provides allowance. “I get better results when the team operates out of passion than money,” she says.

Like today’s athletes, Fernandez believes in functional fitness training where muscles are conditioned for a specific task or sport, while engaging the core.

She cites the pistol squat, a one-legged bodyweight squat that is crucial to football players. A difficult exercise, it challenges one’s balance, flexibility and leg strength.

“We often neglect the hamstrings; you need to strengthen all sides of the legs to avoid injuries,” she says.

When she suffered a knee injury, Fernandez underwent platelet rich plasma treatment and rehabilitation exercises instead of undergoing surgery.

Her toned abs are shaped by strength training, football practice and weekly games.

“I don’t take sweets,” she says. “I eat brown rice and take supplements like LivingFuel Supergreens because there’s not enough vegetables being served in the house.”

Fernandez knows how to grab the limelight effortlessly, given her charm and the guts to reach her goals. She was tapped to host sports segments on TV. “With more visibility I can influence more people to live an active lifestyle,” she says.