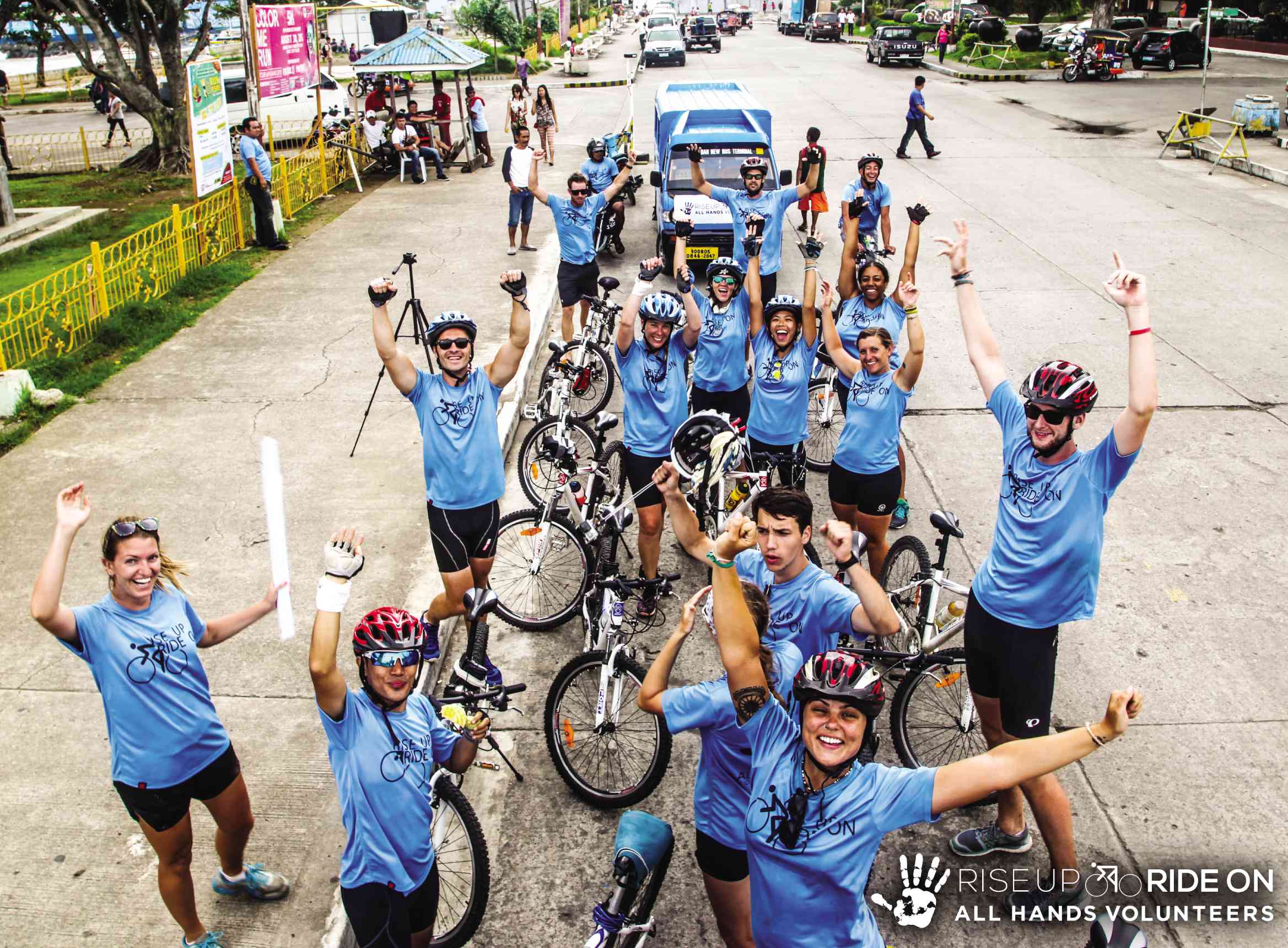 RIDERS from all over the world gathered to participate in “Rise Up, Ride On,” which raised funds for the All Hands Volunteers rebuilding program.

While many young women from privileged families would grace society magazines that depict their glamorous lifestyles and careers, Ma. Michelle “Mia” G. Tengco has been roughing it up in Leyte, helping to rebuild shelters for Supertyphoon “Yolanda” survivors.

Idealistic at age 29, she says she wants to be involved in a service where she can look beyond herself and make a contribution to the community and country.

An entrepreneur, Mia is managing partner and chief operating officer of Tenkie Box, distributor of OtterBox, the largest-selling protective cover for smartphones and tablets. The company, which she set up with relatives, has 15 branches and supplies big stores. Her business has allowed her to pursue her advocacy.

Family members call her “Miss NGO” for her involvement in civic causes.  In 2007, Mia and students from the  Ateneo de Manila University joined the farmers who came from all over the country. They called on Congress to pass the Comprehensive Agrarian Reform Program Extension with Reform, and Mia camped out in Ateneo to sympathize with the farmers.

This year, Mia has been involved in All Hands Volunteers. This US-based nonprofit volunteer organization attends to communities hit by natural calamities by involving volunteers, partner groups and the locals in cleaning up and building homes.

After Yolanda, the most powerful tropical cyclone in recorded history, All Hands established Project Leyte, which invited volunteers from all over the world to clean up the debris and break down damaged structures.

One day, Mia’s mother, Bingbing Quiros, saw an online post of vegetarian restaurateur Chiqui Mabanta, at a construction site, showing her with foreigners in an All Hands project. Bingbing told her daughter that she might be interested in this endeavor.

Last January, Mia made her first foray into All Hands’ program in Barangay 83-C, Taguiktik in Tacloban.

“It lasted nine months,” said Mia “At that time, we built 42 two-story homes in situ, meaning local people were not forced to relocate out of the area that they considered home. We engaged volunteers and local carpenters, working six days a week to get the job done.”

The volunteers were assigned to different groups with interesting names. On her first week, Mia was the lone female assigned to the Movers and Shakers group, which literally moved 12-foot coco lumber logs from the lumber yard. These were building materials to be used for a school in Sto. Niño.

The Gladiator team specialized in heaving logs and heavy equipment. She learned to use the shovel and sledgehammer, clear up rubble and salvage damaged but usable materials.

When she returned to Leyte in March, Mia mixed cement and helped clean the site for construction. In the course of her stay, she was inspired by the stories of international volunteers who had planned to work in Leyte for six months.

She came back in June and stayed for two months to completely immerse herself in the community.

In building houses, the volunteers worked on the ground floor, installing floor boards, doors and windows, while the professional carpenters did the second floor and the roofing. Mia learned carpentry work on the job and proudly showed a photo of some tidy wooden flooring that she had laid out. Eventually, she was made a site leader. 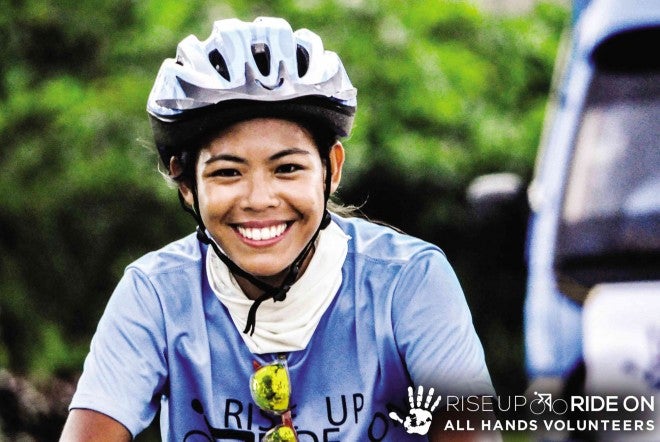 Everyday, the locals would watch and bring them food, mostly bread and drinks, since many foreigners were vegetarians. During the turnover of their new home, the Leyteños showed their gratitude by serving pancit.

The volunteer lifestyle is communal. They stay in a hostel with rooms given names such as Duck Pond, Troll Hole and So Tidy. They share rooms and bathrooms and eat breakfast together, meet after work in the evening and have dinner. On their days off, they either spend a night at a comfortable hotel or enjoy the urban renewal of Tacloban.

“I’m the type who wants to get out of the comfort zone,” said Mia.

Although she was accustomed to indulgences while growing up, she practically lived in a suitcase during her volunteer days. She realized that she didn’t need much to be happy. 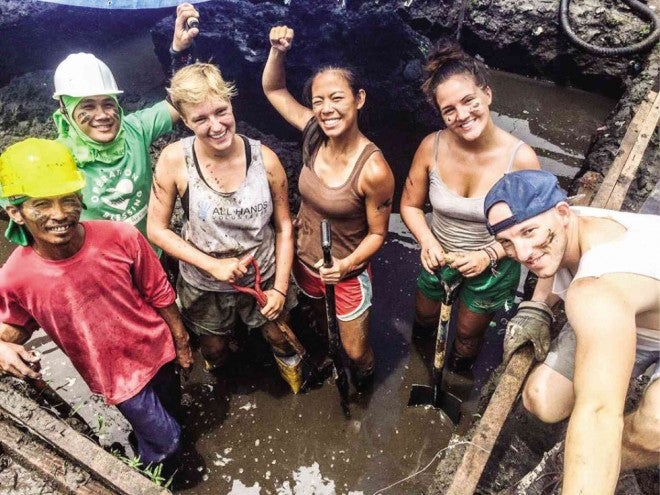 “My outlook has changed,” she admitted. “I learned that there are many ways to look at life. You meet people from different parts of the globe. Helping has become easy.”

The volunteers have been creative, though quirky, in raising funds to build homes in Leyte. Last August, All Hands Volunteers organized “Rise Up, Ride On,” a four-day, 260-km bike ride challenge that retraced Yolanda’s path in Samar and Leyte. It raised over $40,000 for its rebuilding programs.

Meanwhile, other foreigners did their own fund-raising, such as shaving their heads or belting out in a marathon, 20-hour karaoke. Lennart Bakker, a Dutchman and All Hands project coordinator, raised $1,500 by biking from Manila to Tacloban.

On her birthday, Mia invited friends for drinks and made her pitch about All Hands Volunteers’ Project Leyte. After a video presentation of the construction projects, her friends wrote out checks as their birthday present to her. “They saw how enthusiastic I was about this,” she noted.

Asked why volunteers build homes when these organizations can just hire professional construction workers, Mia explained that people engaged in volunteerism for its life-changing experience. One of its hallmarks is the quick response of the team in mobilizing people to help in a situation.

She remembered the experience of uncovering frogs, baby snakes and spiders on site while clearing all the rubble. It felt as if she was clearing up her inner debris: “I was digging out the judgments and negative perceptions inside to reveal what was important to me—to show compassion.”