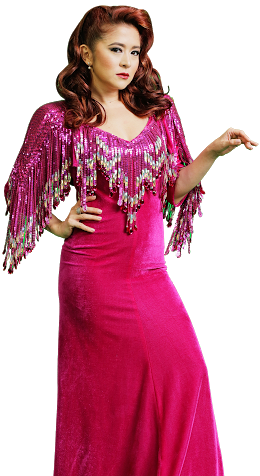 Antoinette Taus. “No matter what, I really don’t plan to copy." PHOTOS FROM RESORTS WORLD MANILA

Taus alternates with Cris Villonco in the role first written for comics by Nerissa G. Cabral in 1984 and made immortal by Cherie Gil in the 1985 film version. Lavinia was also essayed by Angelika dela Cruz in the 2006 television series and was first interpreted onstage in June this year by Villonco.

Playing once again the role of heroine Dorina Pineda, made famous by Sharon Cuneta in the 1985 film, is stage neophyte Monica Cuenco, who won a nationwide search for a new actress to play Dorina. Cuenco was a third runner-up in the reality television talent show “Star Power: Sharon’s Search For The Next Female Superstar” in 2010; only 15 years old, she was then known as Monica Sacay.

Epy Quizon now alternates with Jon Santos in the role of Dorina’s aunt.

Offstage is the same creative team responsible for the show’s sold-out success: Freddie Santos as director, and the Manila Philharmonic Orchestra under maestro Rodel Colmenar to bring to life the music of Willy Cruz.

Taus, who began her career as a child star on TV and came of age in the movies, recently gained acclaim for her role as Betty Rizzo in 9 Works Theatrical’s restaging of the classic musical “Grease.” She also sang in “Sabel,” the dance-musical created by Santos that was inspired by National Artist Benedicto Cabrera’s Sabel series of paintings.

Taus says her role in “Bituin” is thoroughly familiar to audiences, but, “no matter what, I really don’t plan to copy. I have a lot of diva idols, too, both in Hollywood and in the Philippines. I know the stories of what they’re like in real life. They all have their reasons why they are a certain way. Honestly, they probably got to where they are because of that really strong, aggressive personality.

“So, I wouldn’t call Lavinia evil. Not everyone who does bad things or treats people a certain way is evil. She fights for her spot in the limelight, and even the end of the story shows her redeeming herself.”

Has she gone through the same cutthroat showbiz life?

“I grew up in the industry and I saw that every day, even with kids,” says Taus. “It was so sad to see child actors elbowing each other to be onstage. But I’ve never been the kind of person that hopes for something to work out in exchange for hurting somebody else. I don’t believe in that.

“Lavinia is lucky, she got her stardom because Dorina gave up in the end, right? But it’s a character… Hopefully, the truth [in her character] comes out through my performance. I’m trying to be the ultimate concert queen and superstar and keep the truth and rock it out on stage.”

For her part, Cuenco returns to the stage a better-honed and more assured performer. Not only has her real-life experiences— from winning a TV reality show to headlining  a splashy musical production—mirrored the fictional Dorina Pineda’s rise to fame, she also admits to taking notice of what theater critics and reviewers have said of her performance in the first run.

With Villonco and now Taus’ Lavinia alternately giving hell to Cuenco’s Dorina, there’s double the reason to catch the show and bask once again in the starlight of “Bituing Walang Ningning: The Musical.”