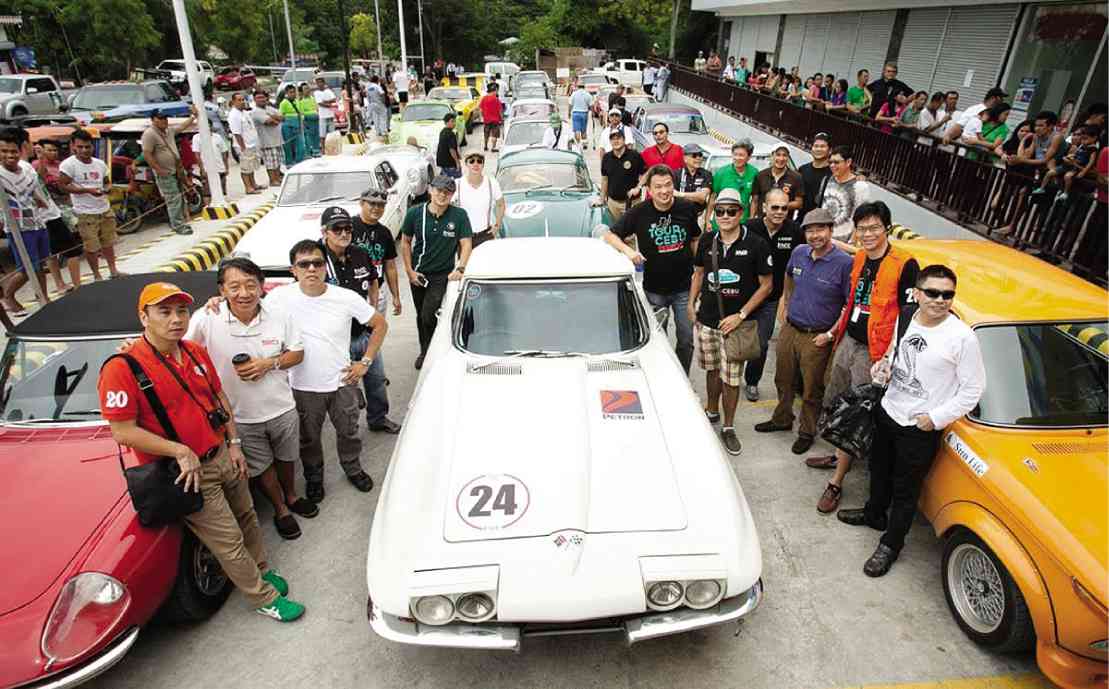 We love road trips and the obligatory bag of Cheetos (cheddar jalapeño flavor) that we bring along, as well as the convenience-store stops along the way to load up on more chips and chocolates.

So common to us is the sight of the driver with eight fingers on the wheel—the right index finger and thumb are up in the air because they’re full of cheese powder—that we couldn’t help but laugh when we chatted with some of the guys from the Performance and Classics Enthusiasts (PACE), a group of car enthusiasts in Cebu.

We asked if they, too, munch their way through their rides.

One of the founding members, Chris Tio, shrieked: “Nooooooo! Classic cars require absolute concentration on the road! They don’t have modern safety equipment like ABS brakes, airbags or, sometimes, even power steering and air conditioning. The driver has to be fully focused without the aid of computers or anything.”

Chris, who is also C! Magazine’s classic-car editor, is one of the most passionate people about automobiles that we’ve met, and as he recalled how PACE began 10 years ago, his enthusiasm was palpable.

“I will always remember the first time I saw [furniture designer] Kenneth Cobonpue driving,” he said. “I was coming down the mountains of Cebu in a Subaru STI when, to my amazement, a pristine black 1959 Porsche 356 Cabriolet was headed up. My jaw dropped as I had never seen a 356 Cabriolet, much more one in motion. I saw the driver and recognized him as Kenneth.

“I remember every crisp detail of that moment. It was as if a classic-car magazine had come to life before me.

“From then on, I was hooked. I soon became fast friends with Kenneth, who brought along [entrepreneurs] Jay Aldeguer and Glenn Soco, and thus began the initial sparks that laid the foundation of what eventually became PACE.

“I remember Jay’s amazingly preserved and extremely low-mileage 1974 Porsche 911S Targa and 1967 Porsche 912. And Glenn brought a modern Porsche, a Boxster. It was an eclectic mix, but what united us was summed up in the name of the club. We loved performance, and we adored classic cars.

“But the heart of our fellowship was that we were enthusiasts of driving. We saw ourselves as a driving club of enthusiasts who liked performance and classic cars.

“The club soon attracted like-minded enthusiasts. What made the club special was that there was a high standard set for passion for both driving and classic cars. We would do regular runs throughout Cebu and the neighboring islands, often in vintage cars.”

This Oct. 3-5, to celebrate its 10th year, PACE is holding its second Tour de Cebu, the country’s only historic sports car rally inspired by the iconic Mille Miglia (a 1,000 mile open-road endurance race) in Italy.

Flag off for the 34-car contingent is Oct. 3, 7 a.m., with the cars spaced a minute apart from each other. It’s a regularity race, not a speed race, so the winner is the driver who completes the race in a pre-defined time with the lowest penalty score.

It will be led by four lead cars and followed by three crew vehicles, one ambulance, and two self loaders.

The cars will drive through Southern Cebu to Dumaguete, spend the night there, then head to Bacolod early the next day, and come back to Cebu through the northern part of the island on the last day.

“When we were planning how to celebrate our first decade, we remembered how we started and what we loved doing,” said Chris.

“Jay and Kenneth had a vision of a Mille Miglia-inspired classic car rally, to be run along the roads that we have learned to love, across the islands of the Visayas. When we broached the idea to our sister club, the Manila Sports Car Club (MSCC), it immediately signified its support.

“Martin Galan of MSCC came up with a term that captures the event perfectly: ‘touristic rally.’ Tour de Cebu highlights the beautiful driving roads and picturesque scenery of the islands. It brings out the warmth and smiles of the people… It also showcases the nautical highway, which allows us to travel throughout the different islands.”

We asked them if they could drive on any road in the world, where would it be?

Mike: “I want to drive along the Italian countryside while stopping to take amazing shots of the beautiful scenery.”

Kenneth: “Mine would be Italy, too. The route of the historical Mille Miglia rally from Brescia to Rome brings you through narrow cobblestone streets, mountain passes, and the most scenic roads by the sea.”

Jay: “My dream is to pick up a classic Porsche at the factory in Stuttgart and drive around Europe with my youngest daughter Ariana, who incidentally shares my passion for vintage cars. It would be great if I could do a road trip with Ferdinand Porsche, too, so he could tell me if I’m driving his cars the way they were meant be driven.” (Laughs)

What is now the most prized piece in your collection?

Kenneth: “That would have to be my 1974 Ferrari 246 Dino GTS. The value of this car has climbed to stratospheric heights in the last couple of years, with all classic Ferraris. Sitting so low to the ground and hearing that raw V6 behind you is an experience not unlike driving an F1 car.”

Jay: “My 356. I prefer the earlier cars, when their designs and mechanicals were at their purest form.”

What is your dream car?

Mike: “Kenneth’s Ferrari Dino! It is one of the most beautiful classic sports cars ever designed!”

Kenneth: “I have several cars I want to add to my collection, but prices have risen higher than my reach. An early Lamborghini Countach, an Aston Martin DB5 (the James Bond car) and a Mercedes-Benz 300SL Gullwing.”

Your tips for people who want to get into car collecting?

Jay: “Drive your cars as often as you can. These vintage cars were meant to be driven!”

Kenneth: “There are many reasons to get into car collecting. It may be for investment, nostalgia, actual use or the pure love of the automobile. If it’s for investment, go for models which are rare, beautiful or historically significant.

“If you are buying a car to use on the weekends, go for a car that is not expensive to maintain and fun to drive. The most important thing is to restore them properly, as close to the condition when these cars left the factory.”