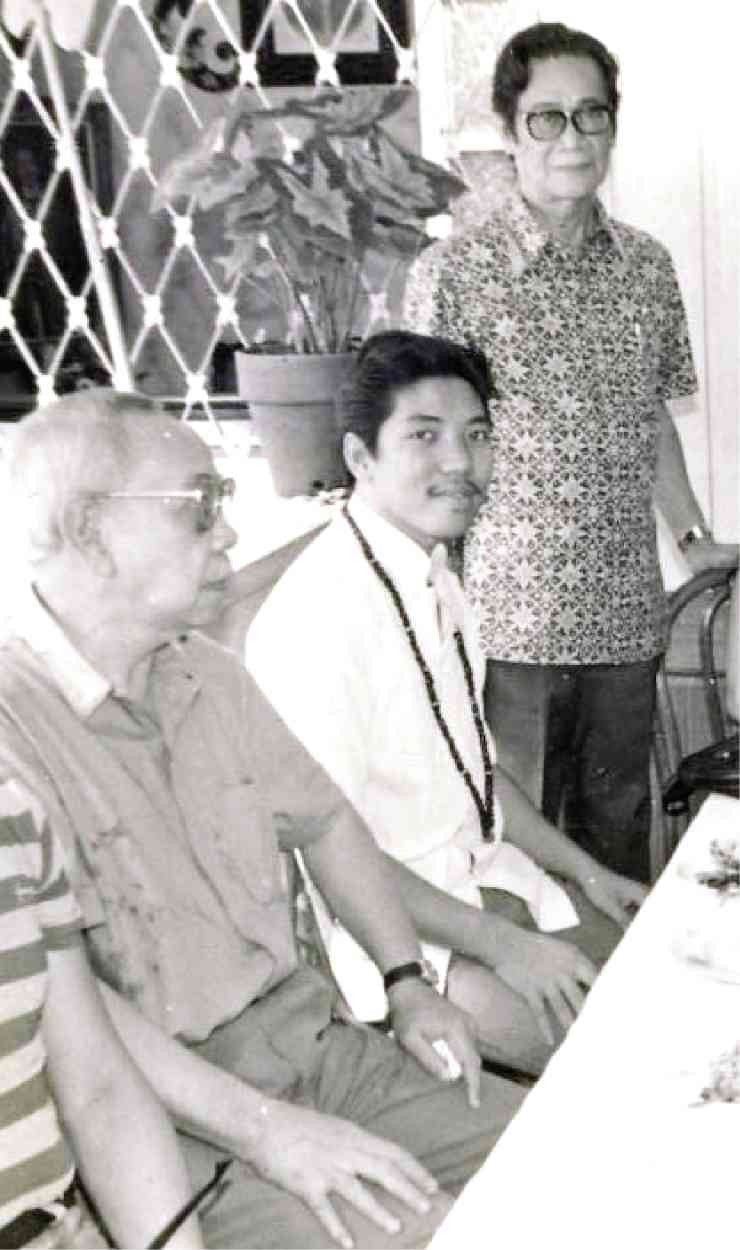 THE AUTHOR (center) in the ’80s with his two mentors: Emilio Aguilar Cruz and historian Teodoro A. Agoncillo FROM AUTHOR’S FILES

Abe (pronounced Ah-beh) is the Kapampangan word for companion or friend. It is also the name of a popular upscale Filipino restaurant named in honor of Emilio Aguilar Cruz—writer, painter, diplomat, gourmand and raconteur.

Abe Cruz was many things to different people, like a diamond with many facets, yet it is unfortunate that he is now remembered more for the restaurant that bears his name than the books he wrote, the paintings he made and the life he lived.

Cruz was born a hundred years ago in Magalang, Pampanga, a town at the foot of Mt. Arayat, famous for pastillas de leche. His family moved to the capital, San Fernando, when he was a boy, and here he learned to read, write, draw and play the violin. He eventually grew tired of school, but not reading; he also loved music but his affections were not reciprocated.

He liked to draw, sketching what he saw around him, capturing images with his eyes and taking them down by hand on sketchpads, notebooks and table napkins. He drew all his life, and it was this love for art manifesting early that persuaded his father to bring the talented teen to Manila and enroll him in the Escuela de Bellas Artes, or the University of the Philippines School of Fine Arts, in 1930.

Classes were held in a rambling old house on R. Hidalgo street in Quiapo; the dean of the school was the venerable Fabian de la Rosa. Cruz stayed for only a year in the School of Fine Arts, because he grew bored with painting stuffed birds and bottles emptied of ketchup and refilled with varying amounts of liquid. He drifted to the UP campus on Padre Faura, drawn to its library and the student literary circle.

Spending a lot of time in the Fine Arts Library gave Cruz the opportunity to watch Fabian de la Rosa at work—merely 10 feet away. The library opened into the dean’s office and studio whose door was often left open to take advantage of the draft generated by the library ceiling fan.

Cruz kept a distance from Don Fabian, who deigned to speak with him only once. He watched as Don Fabian filled his canvases with pictures of houses, trees and people across the street from his office window. Cruz recalled that his real education was watching Don Fabian mix colors on his palette.

Aside from painting, Cruz looked up to Don Fabian for his writings on art and his skill in fencing. Don Fabian, after all was the bridge between the 19th-century Philippine painting of the generation of Juan Luna and that of the prewar Philippines dominated by the sunlit canvases of his nephew Fernando Amorsolo.

All this sounded like ancient history when I met Cruz for the first time in 1982. I was a college student then, desperate for a term paper topic, while he was a retired newspaper editor and diplomat who spent a third of his time writing, another third painting, and the last third translating 19th-century travel accounts of the Philippines from the original French into English.

We bonded over books, and I never left Cruz without a book or two sent home with me as assigned reading. In the beginning, I read everything I was given; I also noticed that the books he sent multiplied and became heavier, both literally and figuratively, from easy-read paperbacks to thick hardcovers on history, art, biography and the social sciences.

I gave up only once, when I was sent the original Italian version of Umberto Eco’s “The Name of the Rose” as we waited for someone from abroad to bring home an English translation.

“I think you have an exaggerated idea of my talents,” I blurted out as I politely gave back “Il Nomme de la Rosa.” He pushed the book back to me and gently admonished: “You read so slowly, Ambeth, you should finish at least one book a day.”

I was taking Spanish in college then and was frustrated with conjugation and grammar, so Cruz opened the facsimile copy of Rizal’s “Noli me Tangere” and made me marvel at the hero’s clean and legible penmanship.

From the “Noli” to the “Fili” to the eight volumes of Rizal’s correspondence all read in the original, I learned not just Spanish. Cruz also gave me the primary source readings that led to my career in history and a specialization on Rizal.

So the reading list grew as my out-of-school education expanded to museum visits and Saturdays in the Ermita antique shops in search of interesting things. Those were the days when antiques were plentiful and reasonably priced.

I bought the best that I could afford on a student allowance by learning to spot diamonds in the rough and haggling for a discount. Charm came in handy, too, allowing me on occasion to pay for items on installment.

In time, I, too, developed a taste for organized clutter on my work table, following the example of Cruz who was surrounded by objects that inspired thought and coaxed words to flow onto paper. These objects need not be expensive; on his desk were an 18th-century image of the Virgin in dark hardwood with features only a mother would love; writing instruments ranging from Montblanc to Bic; a bust of a prewar Filipina beauty queen by Guillermo Tolentino; an assortment of notebooks and wristwatches; and even a pebble picked up from Intramuros.

His bedside always had a book to be read, and a lovely painting or sculpture that would be the last thing he saw at night before retiring, and the first thing he saw when he woke up.

I was lucky to have been introduced to art long before the auction wars and stratospheric prices that are now the norm.

E. Aguilar Cruz bought what he liked, confident in his taste. Works that passed through his hands were by Guillermo E. Tolentino, Fernando Amorsolo, H. R. Ocampo, Vicente Manansala, Federico Aguilar Alcuaz, Victorio Edades, Romulo Galicano, among others. His choices have been vindicated by time.

Today, paintings, watercolors and sketches fill the E. Aguilar Cruz hall in National Museum —giving a new generation a glimpse into his art.

But, for me, the most resonant is a glass case filled with personal objects: a walking cane; books he wrote; a book I wrote—my first—about his paintings; a crystal ink container; a pen; a pipe. Traces of a life well-lived.

E. Aguilar Cruz was “Abe” to friends; it’s the short form of “kayabe,” the Kapampangan word for friend and companion.

I reflected on his nickname, reliving memories of a mentor and friend, and realized that, when we met over three decades ago, I started as his grandson; today I have since matured to become his father.