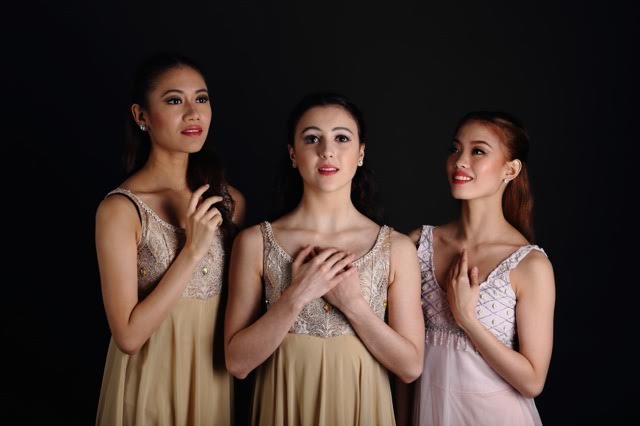 FOR ITS upcoming take on an immortal classic, Ballet Manila (BM) introduces a new crop of promising ballerinas who share three things in common: They are all medalists of the 2015 Asian Grand Prix (AGP). They are all debuting as Juliet. And they all have come a long way from home to follow their dream.

Katherine Barkman, Abigail Oliveiro and Joan Emery Sia will perform in Paul Vasterling’s “Romeo and Juliet” on Oct. 2-4 at Aliw Theater in Pasay.

“I am very proud and excited to introduce them to the public,” says BM artistic director Lisa Macuja-Elizalde.

While the girls have all participated in the company’s season opener last August, playing Juliet will be their “baptism of fire” as this will be the first time Ballet Manila is staging a classic without its celebrated prima ballerina leading the cast. Macuja-Elizalde, who recently retired after dominating the Philippine ballet scene for three decades, says that she particularly chose “Romeo and Juliet” as an ideal springboard for her debuting ballerinas.

“Juliet is a dream role for any ballerina,” says Macuja-Elizalde. “She is playful and carefree in the beginning but soon evolves into a passionate, obstinate—even desperate—child-woman the minute she falls in love. Dancing Juliet is quite challenging because it is technically demanding while at the same time, emotionally charged. While the character itself is very young, the role requires maturity and precision from the ballerina.”

“Moreover, Juliet is the sole female lead in a cast dominated by men!” she points out. “All eyes will be on her because she provides that light, fragile yet defining energy amidst all the feuding and swordplay going on around her.”

At 18, Barkman is the youngest artist of Ballet Manila to dance the principal role in a full-length ballet and will open the production opposite BM stalwart Rudy de Dios, a seasoned Romeo who has partnered Lisa Macuja-Elizalde in several occasions.

Barkman arrived in Manila from Pennsylvania, United States, only last June and in two months, she led her new company in the medals race at the 2015 Asian Grand Prix in Hong Kong—clinching the competition’s highest honor, the AGP Cup, as well as a Silver medal shared with Elpidio Magat in the Pas de Deux division.

Cited by the jury as “representing excellence in every way,” the charming teen was easily a crowd favorite, on and offstage, during the weeklong competition.

A self-confessed ballet junkie, Barkman reveals she literally compelled her parents to send her to ballet school at the age of three. Since then, dancing has become the center of her existence and the source of her greatest joy.

She received advanced training under prominent Russian coach Nadia Pavlenko, who encouraged her to audition with Ballet Manila, given its strict compliance with the Vaganova method and commitment to staging the classics.

“I never imagined I would be dancing Juliet at 18. To have that opportunity is really a blessing,” she says, adding that the character is one she can easily connect with. “The fact that she’s changing, developing, blooming—I think I can really relate to that because of my age. She’s trying to find herself… to discover who she is. So that is something that I can relate to.

“But most of all it’s the fact that she’s a dreamer. She believes in love, she believes in happiness. She’s willing to go against anything to find that and to do what she has to be with her love. And I’m a lot like that—I’m a very passionate person, I’m a very intense person. I believe in love just like Juliet does.”

Singapore-born Oliveiro first encountered Ballet Manila at the 2013 Asian Grand Prix, where she emerged a finalist and was invited by the company’s artistic directors to come to the Philippines for an audition.

She set aside her university studies in Australia to immerse herself into dancing professionally with BM. Last August, she joined the AGP again and finished with a Silver medal in the Women’s Senior Division.

“Before I came to Ballet Manila, I’ve only done ballet full time for eight months,” says Oliveiro, who turned 23 this year. “To know that in the short time I’ve been here, to see how much they’ve invested in me and how much they believed in me—and to come home with what I had from the AGP—it’s quite overwhelming. I literally came from nothing not that long ago and it’s all their love and support that have really made a difference in me.”

While she has danced the twin roles of Odette/Odile in a recent production of “Swan Lake,” the willowy ballerina—who will be performing opposite Brian Williamson as her Romeo—is eager to play Juliet because she is actually human.

“To do a dramatic role effectively, you want to reach out to the audience as humanly as possible,” she says. “I really like dancing and it’s one of my outlets for expression. It’s not a role that I aspired to get but I’m very excited to do Juliet! Anything I’m given, I’m happy to do.”

Of the three budding ballerinas, Sia has been with Ballet Manila the longest.

The winsome lass from Cagayan de Oro City was accepted as a company scholar in 2009 and worked her way up to becoming a soloist within three years. Like Barkman and Oliveiro, she completed the 2015 Asian Grand Prix with honors—bringing home the Bronze medal in the Women’s Senior Category and a Bronze medal in the Pas de Deux Division shared with partner Romeo Peralta.

“My dreams have come true the day I moved to Manila, not because I’ve been given fancy roles but simply because it has always been my dream to work in a professional company and to learn from the best,” she says. “I came from a very small town with limited opportunities so when I had the chance to join Ballet Manila, I was truly happy and grateful. At the same time, I was scared because I had to trade one life for another. The pressure to do well is heavy but at the same time, I am motivated because I chose to follow my heart and I want to make the most of my good fortune.”

As Juliet, Sia will be partnered by fellow AGP double medalist Magat, who won Bronze in the Men’s Senior Division and Silver in the Pas de Deux. Describing herself as naturally impassive, she finds it highly challenging to portray a character that demands such a wide range of emotions as Shakespeare’s heroine.

“I’m not a naturally expressive person. What I’ve done to connect with Juliet is to reach out to unhappy experiences that I’ve long been trying to forget, touching them one by one and trying to recall how they felt at the time they pained me. The role is bringing those things back to life in a way that betters me too. I feel that I’m coming to terms with those memories. Every day, I’m learning, every day I am inspired.”

Aside from the three pairings, Ballet Manila’s “Romeo and Juliet” will feature very special guest appearances from renowned dance icons Macuja-Elizalde and Nonoy Froilan, who will give life to Juliet’s parents, Lady and Lord Capulet. And as a rare treat for the local audience, all gala performances will be set to live music by the Manila Symphony Orchestra under the baton of Maestro Alexander Vikulov of the Mariinsky Theater.

Ballet Manila’s production of Paul Vasterling’s “Romeo and Juliet” goes onstage at 8 p.m. on Oct. 2-3, and at 3 p.m. on Oct. 4 at Aliw Theater. Tickets are available via TicketWorld Manila at www.ticketworld.com.ph or call 8919999.