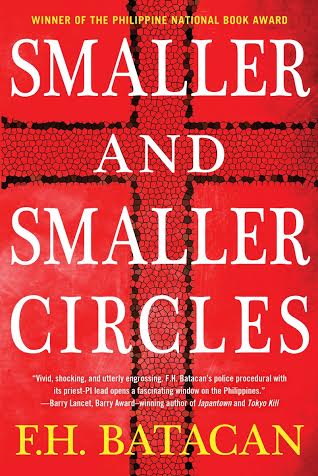 THE cover of "Smaller and Smaller Circles"

WHEN F.H. Batacan’s novel “Smaller and Smaller Circles” first arrived on bookshelves in 2002, the book was clearly special. Originally published by the University of the Philippines Press, it was arguably the first Filipino crime novel, meaning it was set in the contemporary Philippines but used the Western conventions surrounding detective novels. Though it only ran 155 pages, that book won virtually every award available—the Carlos Palanca Award for Novel, the Madrigal-Gonzalez Best First Book Award and the National Book Award for Fiction.

Since then, the rights to “Smaller” were picked up by New York-based publisher Soho Press, and Batacan got to work on an expanded edition. This new edition of “Smaller and Smaller Circles” (Soho Press, New York, 2015, 353 pages) is more than twice as long as the original—and much better as well.

That’s quite a feat because the original skinny version was engrossing and very taut despite its length. But this version of already good “Smaller” is an improvement in every way. It’s the best time to read (for the first timers here and abroad) or reread (for those who had read it before) the novel.

In 1997, the mutilated corpses of children are found in the impoverished Payatas area in Quezon City. Stumped, the National Bureau of Investigation (NBI) calls for backup in a most unusual form: Jesuit priest Augusto “Gus” Saenz. How can Saenz possibly help the NBI? It turns out Saenz, aside from being tall, good-looking and multilingual, is also a trained forensic anthropologist. With the help of his assistant, Fr. Jerome Lucero, and access to a high tech lab, Saenz gets on the trail of what seems unthinkable—a serial killer in the Philippines.

But wait, there aren’t any serial killers here, right? Saenz begs to differ. “Such killers can be found all over the world,” he thinks. “What makes you think the Philippines is so blessed by God that we would be exempt from this kind of evil? It isn’t. It simply hasn’t developed the necessary frameworks, the physical infrastructure and human skill sets, required to recognize and track down such killers.”

Good thing we have Saenz, who is a sleuth straight out of central casting. Because of its procedural nature, “Smaller” has a by-the-numbers feel, because all procedurals do. The Singapore-based Batacan has worked in both the intelligence community and the broadcasting industry, really gets her rewriting to work here. The plot is thick and dark, never afraid to spill blood or viscera to move itself forward.

The cast of characters becomes so much richer, with complex back stories provided for them: Saenz in particular becomes a wonderfully realized creation. With details such as his offbeat taste in music and having come from a wealthy family, Saenz becomes the kind of crime-solver readers will definitely want to see solve more crimes in the future.

Perhaps the greatest thing about “Smaller” is the detailed world building. Readers anywhere will find the descriptions of Manila and its society utterly convincing and believable. It’s an amazing feat to take what we know to be real and load it with the kind of atmosphere that will also make you believe a serial killer is among us.

It’s good that Batacan has already indicated readers will be able to follow Saenz in future cases, because “Smaller” is not only a perfect opportunity for whodunit fans around the world to discover Manila as a setting, but also one for Filipino readers to see the city in a different half-light. That’s how good F.H. Batacan’s expanded version is. The enthralling “Smaller and Smaller Circles” is now not only the first Filipino crime novel, but also the terrific, treacherous touchstone for all such novels to follow.