Standing ovation for Cecile Licad and the Spokane Symphony for Bartók No. 1 | Inquirer Lifestyle ❮ ❯ 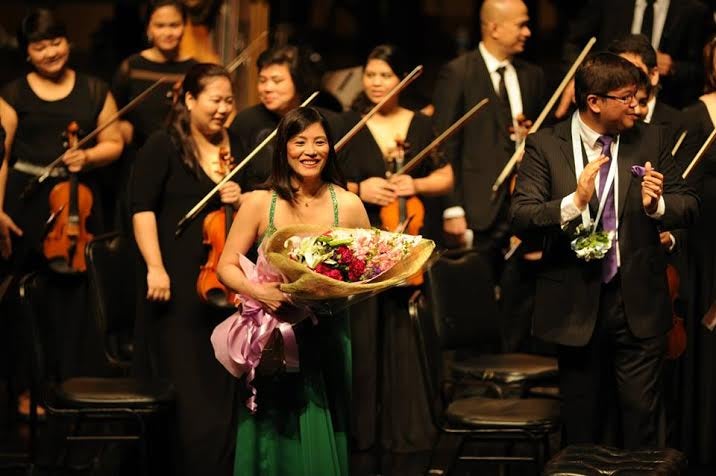 Standing ovation for Cecile Licad and the Spokane Symphony for Bartók No. 1

THE RARELY heard Piano Concerto No. 1 by Béla Bartók made a triumphant comeback Sept. 19 in the latest season concert of Spokane Symphony in Washington, with a standing ovation for Filipino pianist Cecile Licad and the orchestra under the baton of Eckart Preu.

“It was such a thrill for me to experience and be able to play Bartók No. 1, which I know is not a popular piece,” said Licad, who had to give an encore number due to prolonged applause. “This piece has unusual accents and rhythms which I call vibration of life, which is not always about the beautiful. There are hints of voodoo and witchcraft in this piece. That is why you have to study it very carefully.”

Earlier, Licad told a music critic: “I find that this piece is a fasten-your-seat-belt kind of piece. Your ears will be smoking after listening to this piece. You can’t space out for one minute or you fall right off the cliff. It’s larger-than-life work. I watch Miles Davis on YouTube with my son sometimes, and it reminds me of that. It’s just far, far out.”

Washington critic Larry Lapidus reported the performance: “The stage was then reset for the 1926 First Piano Concerto of Béla Bartók (1881-1945), featuring soloist Cecile Licad. As it was, one noticed that the keyboard cover, which ordinarily separates the sounding board from the player, had been removed.

“Once the performance began, one understood why. Licad did not wish there to be any separation between any of the elements in that performance. Everything about her interpretation spoke of a drive to fuse herself into the spirit of the music and unifying herself with every other player onstage.

“The piece is not often performed, probably because it is so difficult. On Saturday night, those difficulties seemed to dissolve, partly through the superb focus and discipline of the orchestra, but even more through the force of Licad’s infallible technique. In more than 50 years of watching people play the piano, this reviewer has never seen its equal.

“In response to the audience’s rapturous acclaim, Licad returned to the stage to dispatch Earl Wild’s preposterously difficult étude on Gershwin’s ‘Embraceable You’ as though it were child’s play.”

Conductor Gerard Salonga, who will team up with Licad on Oct. 2 in another concert at Santuario de San Antonio Parish church in Makati, says the concerto is a tough one to perform for many reasons.

He points out: “The first things one notices are the abundance of meter changes and [seemingly] asymmetrical rhythms. You can never settle into a ‘normal’ groove. It’s a lot like nature, really. Not a glamorous, romanticized notion of nature, but rather a very truthful feeling of nature. Leaves don’t fall off trees at a steady tempo and meter. Dust particles don’t fly around in a straight line at 4/4 time, with an accompaniment of consistently even eighth notes.

“Listening to this piece is like watching a bird fly—sudden shifts in speed and direction, but all very natural. It’s very beautiful to listen to, as well as to look at on the page. All music is tough and challenging, and, like everything else, the more one is willing to invest time and energy in learning the piece, deconstructing it then building it back, the more the piece gives back to the musician in terms of enjoyment. I’m just glad Cecile is the one playing the piano and not me!”

The conductor admits Licad had a very profound influence on him after playing some five concertos with the pianist in the past five years.

“I’ve said this before, that she has had a profound influence on me and the way I make music now,” he says. “She really opened my mind to what is possible for a musician, not just in the extreme level of her technique, but how important the musician’s imagination is to the performance of a piece. If you let your fantasy go, the things you can achieve are limitless. It’s really a very creative process… and because of her I realized that the performer’s creativity and imagination are really a continuation of the composition process.

“I’ve read about that a lot [especially from the writings of Bernstein], but never quite understood it till I worked with Cecile. I can’t wait to hear her ideas. I’m sure after the performance in Spokane she’s already thought of about 100 things to do differently. I’m looking forward to the whole process. I’m sure I will be receiving a few years’ worth of tuition in that week.”