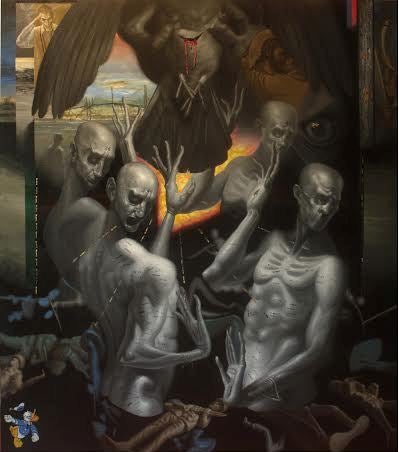 “IN THE Shadows of Cain,” by Adeste Deguilmo

HISTORICAL events have always been commemorated in paintings or murals, with the objective of perpetuating their memory, deepening a people’s sense of patriotism, or serving as a warning that such an event, such as wars or tragedies, should never happen again.

The subjects are often heroes or, in earlier times, emperors, who changed the destiny of their countries, for better or for worse.

In the history of Western art, the first battle scene in a painting was done by Paolo Uccello during the Renaissance. Titled “The Battle of San Romano,” it represented the victory of the Florentine forces over the Siennese army at the time when the whole of Italy was still divided into warring city states.

Consequent to battle narratives are massacre scenes, which depict the destruction and loss of lives at the hands of the more powerful opponent. Depending on the handling of the subject, the resulting artworks can be realistically grim and gory, as in the “Massacre at Chios” by the French painter Eugene Delacroix, which portrayed the destruction of thousands of Greek lives by the conquering Turkish army.

More contemporaneous are two landmark works by Picasso. The first is “Massacre in Korea” which decried American intervention in the Korean war, and the second is “Guernica.” In this most famous antiwar painting, Picasso memorialized the destruction of this Basque town in northern Spain. The artist used two dominant icons, the bull, symbolizing the rampage of fascism in Spain, and the open-mouthed shrieking horse, with its knife-shaped tongue, representing the helpless citizens of Guernica.

In Philippine art, one has yet to see visual depictions of massacres, such as the Jabidah, Escalante, Mendiola or the Ampatuan massacres. At the least, none has been displayed so publicly. Thus, a historic first has been achieved by Cebu-based artist Adeste Deguilmo, with his work memorializing the Mamasapano massacre.

To be sure, the fact that Deguilmo is a Mindanaoan himself, born in Basilan, was an emotionally impelling force which served as an artistic impetus for the creation of this painting.

He has titled his magnum opus “In the Shadows of Cain,” now on view at Artes Orientes Gallery.

Measuring 64” by 76,” the work is anchored on the Biblical narrative of Cain, who murdered his brother Abel. A superlative representational artist, Deguilmo judiciously avoided any grisly sensationalism.

“Cain” is a symbol-laden work, dominated by four figures that may instantly represent the now so-called SAF 44.

In fact, however, based on the contrasting features invested on them by the artist, the figures may also represent the murderous culprits, thus merging the personas of Abel and Cain, here so fluidly intertwined and slip past each other. The mouth of one of the visages has been brutally blown open, while another, filled with guilt, turns his head away.

All four figures bear the Christ’s stigmata while their hands are sheathed with transparent gloves, and in the absence of fingerprints, effectively concealing their identity.

Like bullets whizzing past, penetrating through bodies then ricocheting in space, are the coordinates strung together, identifying the exact location of the massacre site. Spread overhead is the form of a lifeless dove with a fatal wound on its chest, its splayed wings resembling that of the SAF logo.

Stealthily hidden in the darkness is the piercing eye of the American eagle, peering like an omniscient Big Brother.

Deguilmo sensitively calibrated the harrowing mood of the painting through a montage of images: the rickety wooden bridge in the landscape now reduced to a decrepit, skeletal frame; a sneering “Joker” attired in elegant barong Tagalog; a furious Donald Duck, painted an allusive brilliant yellow; and most damning of all, a lift from a proto-Renaissance painting by Giotto depicting Judas betraying Jesus with a kiss. Deguilmo’s “In the Shadows of Cain” is a haunting reminder to Filipinos, Christians and Muslims alike, that death and destruction will never bring the peace that our blood-soaked country so greatly desires.

No longer can we respond to God, as Cain did, when asked where Abel was: “Am I my brother’s keeper?”

A graduate of Fine Arts from University of the Philippines-Cebu, Adeste Deguilmo came under the tutelage of the master Martino Abellana.