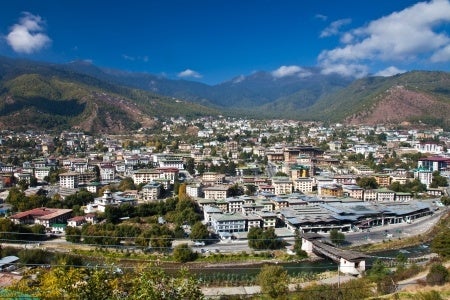 While spring has not been so bountiful, there is not much to look forward to in fall either for the tourism industry in Bhutan that saw a drop in international tourist arrivals by about 14.62 per cent as of August this year.

Even the ongoing Thimphu tshechu, one of the highlights of the peak season failed to draw as many international tourists as it did last year.

Bhutan recorded a total of 99,709 tourists as of August 31 of which 32,877 were international visitors and 66,832 regional visitors. While this is an overall increase of 30.83 per cent, in terms of international tourists, this season saw a drop of 14.62 per cent.

Regional tourist arrivals continued to increase this year. As of August 31, regional tourists recorded an increase of 77.25 per cent compared to the same period last year.

Visitors from India, Maldives and Bangladesh are considered as regional tourists. They are exempt from the minimum daily tariff of US$250 and US$200 during the peak and lean seasons that the international tourists pay to visit Bhutan.

TCB officials said the Bhutan-Thailand friendship offer for the lean months of June, July and August brought in a total of 8,842 Thai visitors that boosted the international tourist arrivals statistics.

However, they also said that the tourism industry continues to be affected by the aftermath of the Nepal earthquake and the bomb blast in Bangkok, Thailand since Bangkok is the preferred choice of entry point and circuit destination for visitors coming to Bhutan.

The drop in arrivals, which is compounded by the increasing number of tour operators and guides leaving, has left the industry in doldrums.

Hotels and Restaurants Association of Bhutan’s president Thinley Palden Dorji said that while the association doesn’t have data on occupancy yet, going by the demand, there is a decline from last year. “This year it’s relatively calmer and easier to get rooms unlike last year,” he said, adding this has left many hotels worried.

However, Thinley Palden Dorji said that last year as the Thimphu tshechu coincided with the puja holidays in October, it had increased demand for rooms from regional tourists.

As for tour operators, most said they recorded a drop in arrivals compared to the past years.

“For us, it’s been the same like last year but this year it wasn’t difficult getting hotels,” a tour operator said. “Still there are many hotels available while last year there was shortage of rooms everywhere.”

Etho Metho tour and treks’ director Sangay Wangchuk said they experienced a drop in tourists by about 30 to 40 per cent compared to last year. He attributed the drop to the Nepal earthquake, which led to cancellation of trips.

Guides Association of Bhutan’s (GAB) chairman Garab Dorji said that at this time of the year, the association receives many requests for guides. “This year there are hardly any requests which means there is a drop in arrivals,” he said. “Most guides were saying they aren’t engaged this time.”

During peak seasons, GAB arranges freelance guides for tour operators when the demand soars. However since last year, Garab Dorji said the market has been inundated with guides. “Every year about 400 to 500 guides enter the market,” he said.

A tour operator said that the drop in international tourist arrivals this fall is proof of how volatile the tourism industry is. “It only goes to show what we are up against if the country becomes too dependent on tourism,” he said.

There are more than 2,300 guides, 1,600 tour operators and 123 tourist standard hotels in the country as of last year.