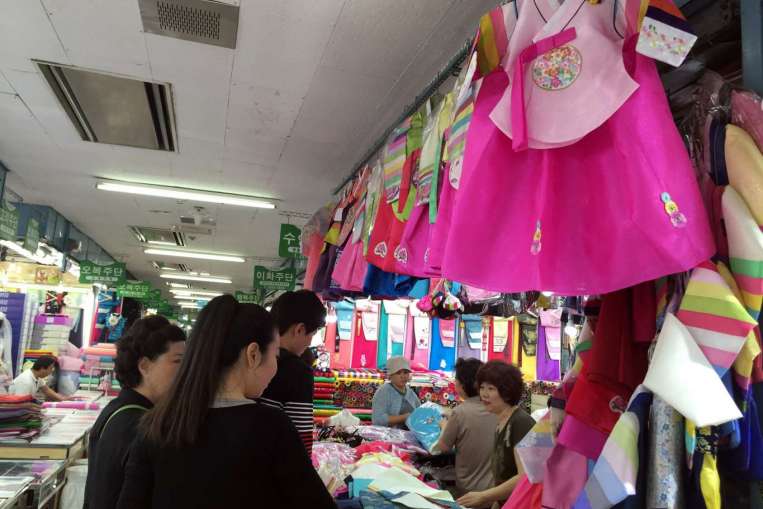 The womenfolk are in for a stressful time during Chuseok, or Thanksgiving Day in Korea.

The train tickets have been booked, gifts to the in-laws sent and hanbok (traditional Korean dress) for daughter prepared. We are all set to travel from Seoul to my Korean husband’s hometown in southern city Masan for our first Chuseok, or Thanksgiving Day.

Chuseok, which falls on September 27 and is on the same day as the Mid-Autumn Festival in Singapore, is a three-day long holiday in South Korea, extended to four days this year because the festival falls on Sunday.

I am looking forward to it as it is the first time in six years of marriage that we are celebrating it the Korean way.

But the country’s biggest and most important festival, which is celebrated with huge family gatherings and traditional ancestral rites, is also the biggest nightmare for married women here.

It is a feeling that would resonate with most other women here, given the sheer amount of chores they have to do before, during and after Chuseok, from housecleaning to non-stop cooking of traditional ceremonial food and the endless dishwashing that follows.

Daughters-in-law, in particular, suffer so much stress and hardship during the festival that some of them develop the so-called “post-holiday syndrome”.

They complain of backache and muscle pain from all the chores and emotional strain arising from conflicts with demanding mothers-in-law, exacerbated by the seemingly unsympathetic husbands.

Last year, a woman in her 30s was arrested for attacking her mother-in-law on the head, after the latter scolded her for her poor cooking skills during Chuseok.

Some women even resort to faking illnesses to avoid doing the chores. Online shopping malls have reported a three-fold increase in sales of fake casts for arms, according to local media reports.

“Are you sure you want to travel for Chuseok?” my kind sister-in-law asked, adding that she is worried if I can withstand the stress.

My husband, however, assures me that it will be a breeze for me since I am a foreigner clueless about Korean traditions.

“No one will ask you to do work since they think you can’t speak Korean,” he said, adding that his own mother will not impose on me since she herself is no fan of the festival.

But he might be wrong, since he is equally clueless about the extent of work done by the women during Chuseok. Like most other men, he will probably do nothing but eat, drink and be merry during the traditional holiday.

A 2010 survey by the Ministry of Gender, Equality and Family showed that 95.1 per cent of respondents said women did most of the holiday chores. Only 4.9 per cent said both genders shared the work.

South Korea may be a modern society now, but tradition runs deep and even the most doting new-age husbands can morph into male chauvinists in front of their conservative fathers and uncles.

Even if a man wants to help, he might be shooed away by his mother and aunts.

But with families getting smaller due to shrinking birth rates and the rise of female power, things might be changing.

Instead of children living in the cities visiting their parents in the suburbs, the reverse is happening. More parents are opting to travel to free their children of the burden of scrambling to buy Chuseok train tickets, which are usually sold out within minutes of being put on sale, or driving home amid severe traffic congestion.

A recent study by matchmaking agency Duo revealed that 78 per cent of 142 married couples surveyed would not be visiting their parents this Chuseok. One in three respondents said their parents do not exert pressure on them to visit, and another one-third said they have already made alternative travel plans.

About 14 per cent said they just want to rest during the long break.

A quick check with five Singaporean friends living in South Korea who have married Korean men revealed that none of them are feeling any Chuseok stress, as their families are small and there is less cooking to be done.

One of them said the extended family goes out for a buffet meal to spare the womenfolk from toiling in the kitchen.

A friend who was pregnant during her first Chuseok last year said her father-in-law allowed her husband to help with the cooking since she is a foreigner and her mother-in-law had passed away.

She recalled that it was stressful as there were strict rules to follow when preparing food for ancestral rites.

All the dishes – from meat to fish and all kinds of jeon (Korean pancakes) – must look nice and presentable when served, out of respect for the deceased.

Since both of them were none the wiser, they spent a lot of time researching online to find the right recipes. During the cooking, they had to redo the items that did not turn out well. In all, they spent one and a half days cooking, working through the night till 5am on the actual day.

Still, she is looking forward to Chuseok this year and has even roped in a friend who is a chef, to share her recipes. Things will get better with experience, she said optimistically.

So, I consider myself duly warned. As I would like to experience Chuseok the traditional way at least once, I am mentally prepared to trade my pen for a frying ladle.

Dongeurangddaeng (mini meat patties), dongtaejeon (pan-fried fish) or songpyeon (crescent-shaped rice cakes), I will make them all, if need be.

Whether I will travel again next year, however, depends on how well I survive this year’s experience.