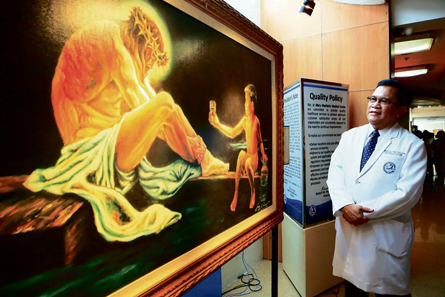 Dr. Robert Magsino, President and CEO of Mary Mediatrix Medical Center, looks at I Thirst--one of Velasco's paintings—which lined the hallways of the hospital

MANILA, Philippines – There are artists, and there is Joey Velasco, who self-deprecatingly considered himself a “heartist”. For good reasons, the main one being the fact that he was not really an artist. He was neither a ‘trained’ artist nor an artist by genetic circumstances (no artist in his family). His artistic talent was a gift and his art was beyond talent. Joey Velasco’s story is a story of hope and healing through art and faith.

Joey Velasco was only 43 years old when he passed away on July 20, 2010 because of a life-threatening kidney disease. Best known for his work ‘Hapag ng Pag-asa’ (Table of Hope), which depicts the ‘Last Supper’ scene with Jesus and streetchildren instead of the disciples, Velasco has stirred the hearts of many with his paintings.

Five years after his death, over 30 of his artworks are making the rounds all over the country with the support of RiteMed. It is like a caravan of hope because of the inspiration that it provides people, especially people suffering from diseases. And recently, cancer-stricken children were the ones inspired not only by Joey’s art but by the family he left behind. His widow Queeny Velasco and their four children were present at the Mary Mediatrix Medical Center where an exhibit of Joey’s paintings was held.

In her speech, Queeny narrated Joey’s journey and bout with kidney disease, which he battled for over five years. The people from Cancer Warriors, especially the cancer-stricken children and their families or caregivers, were inspired by how he overpowered his disease through his art and tremendous faith in God. He painted and finished his artworks even while in pain. “He found hope and healing by expressing his faith through his paintings,” Joey’s widow said.

Even Dr. Robert M. Magsino, President and CEO of Mary Mediatrix Medical Center, was moved by Joey’s story. “As a doctor, I have known that the path to healing is not entirely based on medicines. But also on the kind of environment of the patient, a spark of positivism and a ray of hope often illuminates the path to the healing of the mind and body,” he said.

The “ray of hope” in Joey’s battle with kidney disease is not the proverbial light in a dark tunnel. In his own words, in a television documentary feature about his life, he said at his lowest and during the darkest period, God dangled in front of him not a rope of hope to lift himself, but a paintbrush. So he painted his way out of the dark bottomless pit of depression and hopelessness.

Through his paintings and the Joey Velasco Foundation, many more people are being given hope. In fact, until now, his widow and the foundation people are still taking care of the 12 Hapag kids in his paintings. They now lead better lives in their own homes in a Gawad Kalinga community.

His legacy lives on, his family and his foundation is making sure of that. “We have 29 scholars and support 15 families in the communities we are involved in. We focus on values formation, education, skills enhancement and providing livelihood skills, so the results and benefits will be more lasting and sustainable,” said Queeny, who is the President of the Joey Velasco Foundation. The supported families live in Hapag Village in Amparo, Caloocan City.

And yes, his paintings will continue its caravan of hope. It will be displayed at various venues across the country in exhibits/forums organized by RiteMed, Catholic Media Network, and the Joey Velasco Foundation. Cancer Warriors Foundation, Inc. was also a partner at the exhibit held at Mary Mediatrix Medical Center. Art workshops and a dialogue among different patient groups were facilitated to provide spaces for engagement with the patients and their families. Oftentimes, care givers are also drained of physical, emotional, and spiritual energy. It was envisioned that the discussions would be a safe space for them to draw strength, which hopefully would result to a renewal of faith and hope as they continue to carry the responsibility of taking care of the sick.

Reproductions of Velasco’s paintings are sold during exhibits and proceeds are for the benefit of the 15 families at the Hapag Community Joey is helping. His actual paintings are not for sale though.

It seems Joey Velasco’s self-deprecating description of himself as a ‘heartist’, instead of an artist, is also a godsend. He has blessed people, particularly streetchildren, by being a “heartist of hope”, because a “heartist” can be described as an artist who painted from his heart to give hope to the hopeless. His art is truly beyond talent and his faith is beyond healing.

He may not have gotten physical healing from kidney disease. But what he got was far more lasting. As Bishop Broderick Pabillo said during his homily at Joey’s wake, “His memory will touch more people beyond our lifetimes and he will outlive us.” ADVT