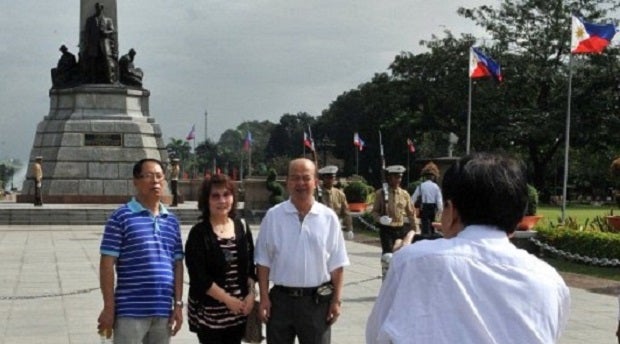 A group of Chinese tourists pose for pictures in front of the monument of Philippine national hero Jose Rizal at a Manila park. The Asia-Pacific will overtake Europe as the region whose tourists spend the most money overseas within 10 years, a report said Wednesday, driven by an explosion in the number of Chinese travelers. AFP FILE PHOTO

Chinese tourists have been reminded by overseas embassies to behave well and respect local laws, regulations and customs as the National Day holiday approaches.

In a security notice on its website, the Chinese embassy in Canada reminds Chinese tourists visiting the country to dress well, avoid loud arguments and to refrain from drawing graffiti.

“When flights are delayed, these tourists should do their best to understand and cooperate,” the embassy said.

The Chinese embassy in Thailand released a similar notice on its website, saying that anyone traveling overseas with a condescending attitude would “ruin their own image”.

Every Chinese tourist should represent the country’s image, the notice said, adding, “It is true patriotism to respect other people and behave civilly.”

Chinese tourists have a longer vacation this year, with Sunday’s Mid-Autumn Festival falling close to the National Day holiday.

Travel agencies including Ctrip.com, China Youth Travel Service and Lvmama.com all reported outbound bookings during the holiday increasing by at least by 150 per cent year-on-year.

But amid the boom, some Chinese tourists have triggered controversy with reports of bad behavior, including four visitors who vented their anger in Bangkok on September 4 after an announcement that their return flight to Chongqing would be delayed by about nine hours because of bad weather and technical issues.

China Central Television reported that many scenic areas in Thailand have put up signs in Chinese reminding Chinese tourists to be well behaved.

In April, the China National Tourism Administration started to keep records of bad behavior. So far, 11 incidents have been reported on its website, including six related to tourists in Thailand.

Ctrip, China’s leading travel service provider based in Shanghai, said it had introduced a mobile app and videos to help guide its clients, especially individual travelers.

Yan Xin, a publicity officer at the company, said, “Much bad behavior is caused by misunderstandings, language barriers and lack of overseas travel experience. … Some incidents could be avoided if homework was done in advance.”

“Some behavior cannot just be categorized as uncivilized behavior, such as drawing graffiti on ancient relics. Such behavior should be punished according to laws or regulations,” Dai said.