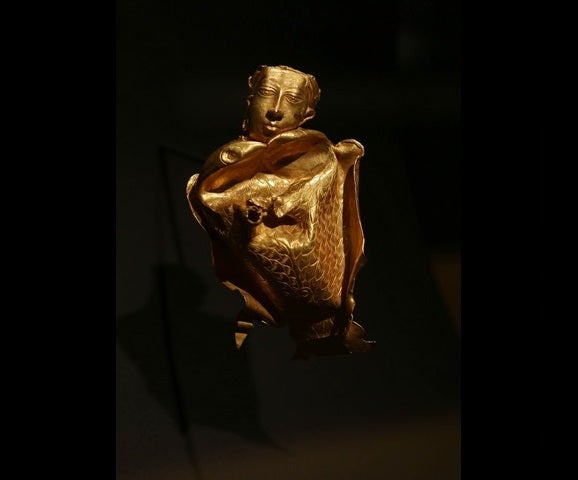 GOLDEN 'kinnari,' or bird-like mythical creature with a woman's head, photographed by Hiroko Masuike for The New York Times

While little is known about the people living in the archipelago before Ferdinand Magellan’s arrival in 1521, the collection of about 120 gold pieces gives a peek into life before the arrival of the Spanish colonizers.

While many of the objects on loan from the Ayala Museum and the Central Bank of the Philippines are small, magnifying glasses are provided—the better to see the pieces with.

Johnson, however, gravitates to the larger, more elaborate pieces including a gleaming sash almost five feet long and weighing about nine pounds.

“The star of the show… could be mistaken for a futuristic ammunition belt. Made of myriad gold beads, it’s designed to be worn over one shoulder, across the chest and to the hip where one end threads through a loop and concludes with the setting for a now lost finial.

“Another striking piece, called a kamagi, consists of 12 necklaces strung together into a nearly 15-foot-long chain punctuated by small, colored stones. The individual necklaces are composed of smooth, interlocking beads that combine to form flexible, snakelike lengths of gold.”

The writer goes on to describe the work that went into creating and designing the different gold pieces. “The belts are made mainly using a ‘loop-in-loop’ technique, which creates patterns like those of a knitted sweater. Tubular and other sorts of beads woven into the belts interject zigzag and stripe patterns.”

He then touches on how the Spanish colonizers found the natives bedecked in gold jewelry but wasted little time in “decimating the native cultures and making off with their gold, which they melted down for their own purposes.”

The gold items on display at Asia Society Museum in Manhattan are a fraction of those found at Ayala Museum and the Central Bank of the Philippines. “While much has been saved, far more has been lost,” Johnson writes.

“One of the show’s loveliest pieces inadvertently reflects the fragility of ancient traditions. It’s a small sculpture in the form of a bird with the head of a woman, a type of mythical creature known as a kinnari. Sadly, its wings have been amputated… and its body is partly crushed. In this wounded state, it nevertheless has a poignant, poetic quality, as if it had been made this way to lament the ephemeral nature of art and life.”