He gave up a boyhood dream to be in ‘Star Wars’ for Cristalle | Lifestyle.INQ ❮ ❯ 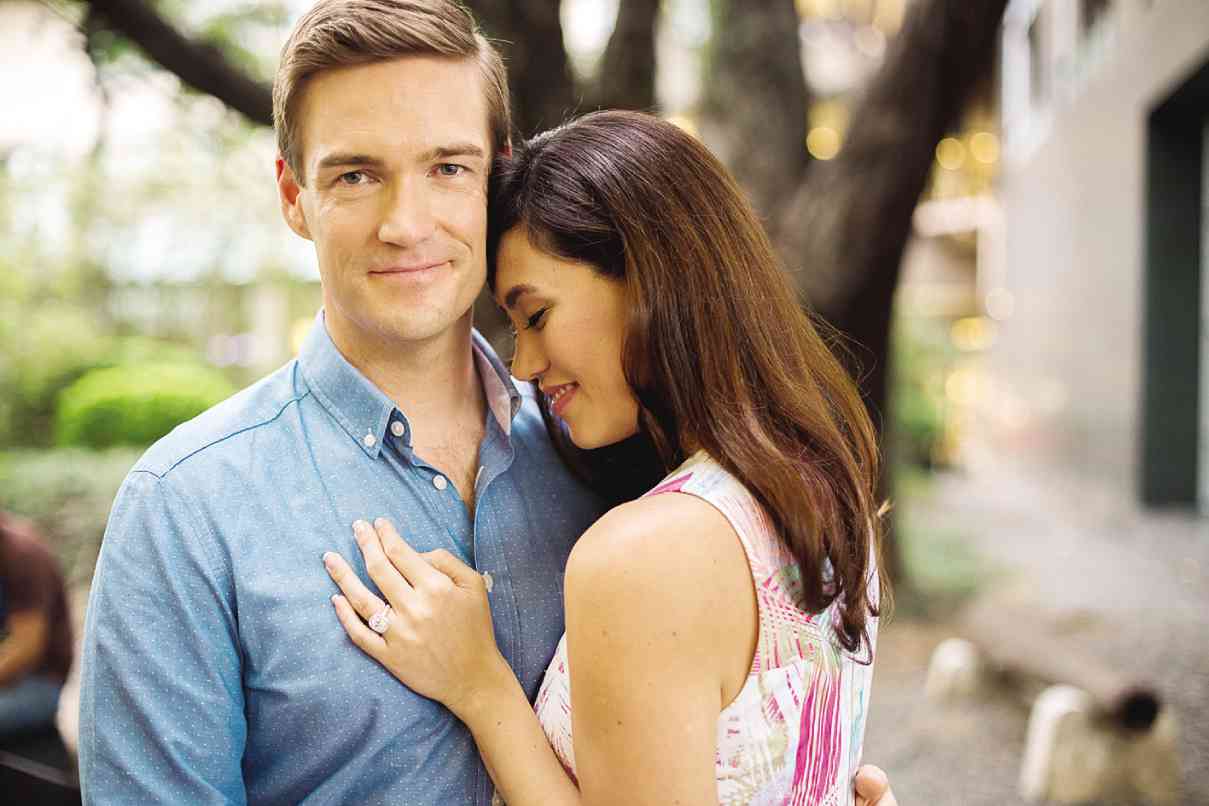 It was a choice between a role in “Star Wars: Episode VII,” or forever lose the girl who “pretty much” stole his heart on the first three days of meeting her.

Pitt was resident manager of a luxury resort outside Abu Dhabi when he first met Henares in 2014.

The two had common friends since Pitt—who was born and raised in Adelaide to an Aussie mom and an English dad—had worked mostly in Asia in his 18 years in the hotel industry.

He was hesitant in the beginning. He has had long-distance relationships and knew they never worked.

“I was getting older and I just didn’t have the time to do that all over again and not get it right,” he admits. “Frank [Briones, who’s Cristalle’s best friend] and Glen [Finlayson], our common friends, told me she’s a nice girl, and that they just wanted me to look after her while she was in the Middle East.”

Henares, who was then on her way home to Manila from Paris and had a stopover in the Middle East, had similar reservations. “[On such occasions] some men expect something,” she opines. “Frank assured me he [Justin] was not that kind of guy.”

Before their meeting, Pitt and Henares had already been chatting online. “I was flirting, she wasn’t,” he says with a laugh.

A few weeks into those chats, he sent her a big floral arrangement on her birthday that made her swoon—even as she thought he did the same thing for other girls.

“I’m a hotelier so we do know how to impress,” he says.

While she offered to pay for her accommodations at the desert resort “because I didn’t want to owe him anything,” he laid out the red carpet for her and arranged for a set of activities that left the young woman giddy in the three days they were together.

They went horseback riding toward the sunset in the desert, capped with champagne and strawberries. They rode camels and went dune bashing. They also went “falconing.”

They likewise discovered they both have an adventurous streak and love animals as well. (They share a French bulldog named Amitee, in addition to Cristalle’s five dogs.)

At the time of their meeting, Pitt was preparing for a role as a “Star Wars” Storm Trooper since it was set to film in the area. The film crew had been staying in his resort; and being a huge fan of the franchise, he expressed his desire for “any role.” They thought he would make a good Storm Trooper since he had the height and build.

“They told me to bulk up a little around the shoulders,” he recalls, “so I was in the gym every day for four weeks. After that would have been the boot camp for the role. And then we met.”

Henares had mentioned she wanted him to meet her family. “What was I to do?” he says, “If I delayed, someone else might whisk her away. I was working and I had very limited free time, so it was either I meet her family or be a Storm Trooper.”

Two weeks after their first meeting, Pitt said goodbye to his “Star Wars” dream and flew to Manila to meet the entire Belo-Henares clan. He got a thumbs-up.

In November, he took her to Adelaide to meet his family, and they loved her.

“They’ve seen us together, and my mom has never seen me so happy,” says Pitt, who, like his fiancée, has one older sibling.

Shortly after they met in Abu Dhabi, Pitt was promoted and became the youngest general manager in his company, the Anantara Group. He was tapped to launch a property in China and, before his four months in Chengdu were up, he requested for a posting that was geographically closest to the Philippines.

“We were going strong at eight to nine months together, and I was feeling confident,” Pitt says.

In December, he was sent to run the Anantara Angkor Resort & Spa in Cambodia.

Last August, in the Maldives, he popped the question, in the same exacting manner of a man trained for years to create memories. It was a logistical challenge that took three months to put together.

When Pitt asked Henares’ parents permission over the phone, he had to assure her dad of his intentions and the strength of his love for their only daughter. Her mom, meanwhile, started cheering on the phone.

“I’m so happy she found the right one,” says the famous doctor, who popped in during this interview. She expressed her glee when she spied the couple kiss. “Look at them, aren’t they sweet?”

Pitt was in cahoots with the Belo-Henareses to make sure the future bride didn’t have a clue of what would happen. He made sure both their families would be there because he knew how important family is to his girl.

He thought of sending her on a treasure hunt à la “Amazing Race” with the theme “You are my greatest adventure.” He had metallic scratch clues and jigsaw puzzles custom-made in Australia.

“We have gone diving with tiger sharks,” he says. “We love the same things. And I wanted us to keep doing these adventures together. It grew and grew from there. I talked to Vicki and she went with it.”

When his fiancée mentioned her vacation plans to her mom, the latter said, “Wow, that sounds nice! Can the whole family go?”

“In my head,” she recalls, “pambihira, long-distance na nga kami, holiday minsan-minsan lang, sasama pa kayo? But of course, I told her, okay.”

Then Belo thought of filming the entire thing, he says. “Vicki said she’ll tell Cristalle it would be for their TV show so she wouldn’t suspect.”

Says Henares: “I told her, ‘No na, Mom. Nakakahiya!’ The next day she says, ‘Guess what? Justin agreed.’”

Meantime, Pitt planned to hide his parents in another island nearby, bringing them over to the resort later on.

“When Cristalle told me about the film crew,” recounts Pitt, “I said, ‘That’s no good… But as long as they’re not on my face.’ We played quite a good game. Quark [Cristalle’s film director brother] shot all messages from her family. He edited the videos that came from my family.”

The ring was custom-made. Pitt had done his research, and knew what design would fit “my princess.”

His friend Glen suggested the jeweler Stephen Lloyd, who has a shop at Peninsula Manila. The jeweler traveled to Israel to find the right stone.

Pitt proposed with a 3.1-carat solitaire diamond ring with a halo of smaller diamonds on a diamond-studded band. Underneath the cushion-cut gem is an orange gemstone, orange being Henares’ favorite color.

They plan to wed in Italy, Pitt’s favorite place in the world, sometime in September 2016. They want kids right away.

Pitt plans to move to the Philippines if the right job comes along. “I told her parents that’s the goal,” he says. “Hopefully the right opportunity arrives…”

But as far as she’s concerned, Henares—who runs Belo Essentials, a subsidiary of her mom’s company, the Belo Medical Group—says, “I told him I really don’t mind as long as [his place of work] is pretty close to the Philippines, and no more than four hours so I can go home every two to three weeks. I know his work is important to him. He has worked for many years to get to the general manager level.”

As it is, the couple see each other once a month, never more than four weeks apart, “as our language of love is so similar… it’s physical touch and kind deeds, little gifts,” she says. Like a typical couple in love, they’re touchy-feely and affectionate throughout this interview. He calls her “wifey,” she calls him “baby.”

He thinks marriage is a partnership in which all decisions are made together. When they were dating, he’d introduce her to friends as “my partner,” which annoyed Henares no end as, to her, it felt too business-like. “It was only after the proposal that I realized what being a partner meant to him.”

“Cristalle’s the first girl I’ve dated where I’m not settling on anything,” says Pitt. “I’ve been lucky, I’ve had great girlfriends, but there was always something where maybe they weren’t as career-focused or as ambitious as I was. Cristalle is the first girl where there’s no settling, no compromise. She’s the type of woman I want to make proud.

“I love her because she makes me happy, and I feed off her energy. It’s impossible to be mad at her… We haven’t really had a fight. It’s the kind of relationship where we kind of add to each other. It’s a partnership—we strive to go forward together and get the best out of life that way.”

The differences in their cultures have never gotten in the way of this couple’s relationship. “You just value people, in business or relationships,” Pitt says. “That’s what has gotten me success in my career, I think. Hopefully that gets me success in my marriage as well.”