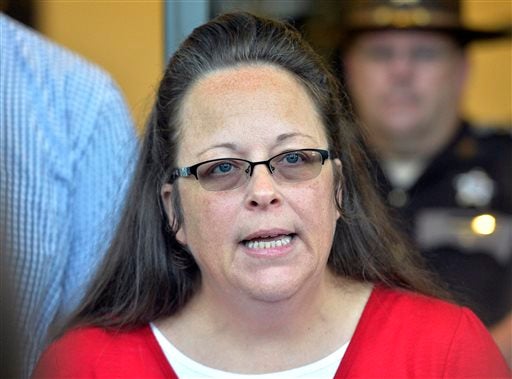 In this Sept. 14, 2015 file photo, Rowan County Clerk Kim Davis makes a statement to the media at the front door of the Rowan County Judicial Center in Morehead, Ky. Davis, who refused to issue marriage licenses to same-sex couples, says she met briefly with the pope during his historic visit to the United States. Vatican officials did not respond to an email asking for comment early Wednesday, Sept. 30. (AP Photo/Timothy D. Easley, File)

LOUISVILLE, Kentucky  — A Kentucky country clerk who went to jail for defying a federal court’s orders to issue same-sex marriage licenses says she met briefly with Pope Francis during his historic visit to the United States.

The Vatican spokesman, the Rev. Federico Lombardi, didn’t deny the encounter took place but said Wednesday in Rome he had no comment on the topic.

Davis, an Apostolic Christian, spent five days in jail earlier this month for defying a federal court order to issue marriage licenses to same-sex couples. In a telephone interview Tuesday, Staver would not say who initiated the meeting with the pope or how it came to be, though he did say that Vatican officials had inquired about Davis’ situation while she was in jail. He declined to name them.

Davis was in Washington for the Values Voter Summit, a gathering of social conservatives where the Family Research Council, which opposes same-sex marriage, presented her with an award for defying the federal judge.

Francis did not focus on the divisive debate over same-sex marriage during his visit to the U.S. last week. As he left the country, he told reporters who inquired that he did not know Davis’ case in detail, but he defended conscientious objection as a human right.

“It is a right. And if a person does not allow others to be a conscientious objector, he denies a right,” Francis said. TVJ