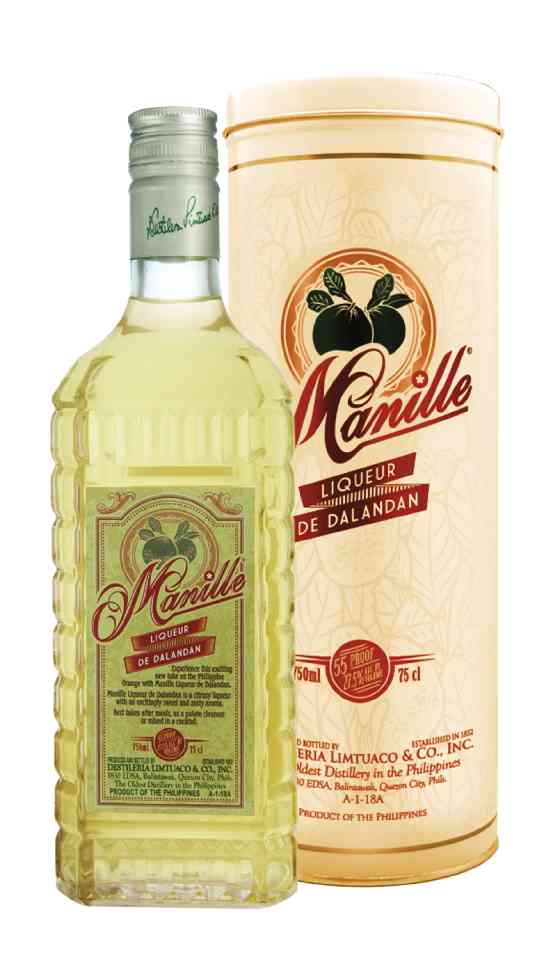 The beguiling aroma of citrus wafted above the liqueur that we were about to drink. When we said, “Dalandan (Citrus X sinensis),” the smile on Olive Limpe-Aw’s face showed how delighted she was that we easily identified the ingredient.

That was more than a year ago, over Chinese dinner. The clear, colorless liquid was still in ordinary small bottles, the alcoholic beverage still developing at the Limpe-Aw family-owned Destileria Limtuaco.

Just like the Manille Calamansi Liqueur and Very Old Captain Artisan Crafted Dark Rum, the dalandan liqueur had its big bash to introduce the latest product in Destileria Limtuaco’s Manille line. Its brand ambassador is Margarita Fores, the launch held at her Grace Park restaurant in Rockwell, Makati.

As expected, the liqueur was an ingredient in the menu. Right away, Fores showed the two bottles whose contents were part of the stuffing including the dalandan leaves. She said that if lemongrass or tamarind leaves are used in many parts of the country, why not dalandan?

The lechon sauce had liver extract blended with red wine, but more interesting was the calamansi-santol mixture that not only gave a fruity finish to the roasted pork, but also cut down the fatty taste.

Fores didn’t forget her Italian influences as she presented the rigatoni with a light cream sauce that had dalandan rind and mint.

How refreshing and tempting to keep on stuffing ourselves with carbs just to keep that flavor and aroma around.

Being passed around, which also distributed that citrus aroma, were duck breast cooked sous vide flavored with Manille Dalandan Liqueur, each slice placed on top of mantou. There was also roast pork belly on baby arugula with a sauce of poached fresh dalandan.

Mixologist Enzo Lim created two Manille Dalandan cocktails —Doña Sol had orange juice, whisky, and sweet vermouth; while Sinturis Smash had gin mixed into the muddled lemon and mint. How great to hear that word again, sinturis, which is how my grandmother called orange, whether dalandan or dalanghita.

But creating the distilled spirit had interesting stories. A video showed a trip to a Mindoro orchard during the dalandan harvest. Dealing directly with a cooperative, said Limpe-Aw, cut out the middlemen so the farmers earn more for their produce. Fores added she even learned how to use the “kuko” a pointed metal made by the farmers that covers the thumb of the harvester in order to cut out the stem efficiently without hurting the hands.

Part of the party was Dr. Ranier Villanueva who created soaps from the byproduct of calamansi and dalandan.

Villanueva, president and CEO of Raniers Research & Development Institute, said he was tasked to create something out of the so-called waste of the citruses.

Since both liqueurs use only the rind of the fruits, everything else—fruit, seeds and peel—will just be thrown away and disposing becomes a big problem for the distillery company.

Villanueva came up with soap branded as “Si,” which may be surmised as Spanish for “yes” but more likely was extracted from calamansi and the dalandan scientific name, “sinensis.”

The soap had just come out of production and Villanueva said it still needs a few days to age before it can be ready to use. The soap is only the beginning; other possible products can include shampoo, conditioner and toner.

What was a great nightcap, at least for me, was drinking chilled Manille  Dalandan  straight up. It brought me back to that first refreshing whiff of the spirit.

For those inquiring whether Food Showdown will happen this year, organizer Myrna Segismundo said the Chef Wars Regional finals will be on Oct. 3 at the Maya Culinary Kitchen in Makati.

Changes were made in the competition. Both professionals and students competed. The secret Filipino ingredient for every region was different (monggo, fresh coconut cream, tamarind, banana blossom); it had to dominate 70 percent of the three dishes required.

But while all the other ingredients in the pantry were grown, processed and manufactured in the country, the dishes didn’t have to be Filipino cuisine. Contestants explored ideas how local products could substitute for imported ingredients.

Chef See Cheong Yan, culinary directory of Enderun Colleges, will conduct a three-day immersion seminar after the finals, in which the final entries will be deconstructed and analyzed so that the contestants will know what went right or wrong with the dishes.