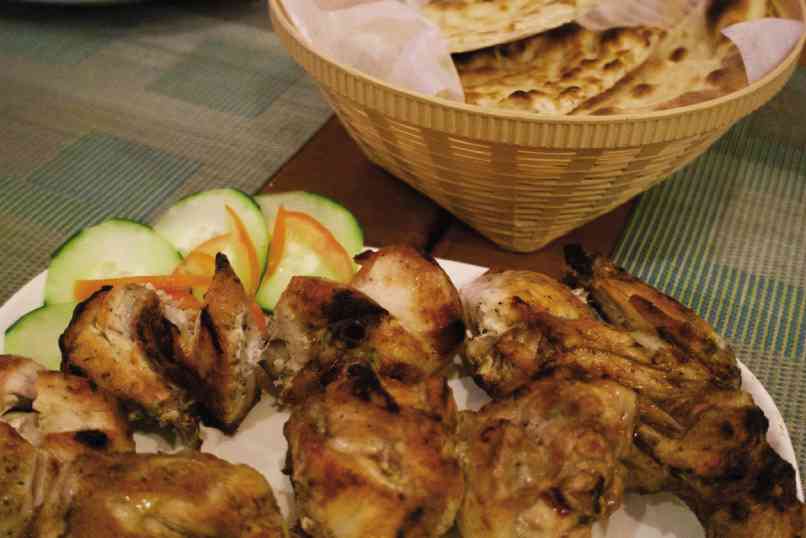 Kabab & Curry, which promises “Authentic Pakistani and Continental Food,” is located beside one of my recent favorite restaurants, Yokohama on Makati’s Jupiter Street, where we’ve been going whenever we feel our blood pressure dipping to anything like normal levels.

One of our peeves about going to Yokohama is fighting for a parking space with the restaurant next door, where an outdoor grill produces clouds of heavily spiced smoke floating in the air, along with the exhalations from the shisha bar of hubbly-bubblies ranged along an outdoor porch.

Thank heavens, then, for obstinate friends who drag you out of your comfort zone. I found myself summoned there for dinner, and walking through the billowing cloud outside into what was actually a fairly calm and civilized dining room.

I have only limited experience with Pakistani cuisine, although anyone who has eaten in Europe’s Indian restaurants might have had more Pakistani, as well as Bangladeshi, food than one thought.

Even if restaurants advertise themselves for “Indian” food, it is other South Asia nationalities who are usually behind the stove. My initial impressions are that the cuisine is not too different from Indian food, except that there is beef but no pork, and no alcoholic beverages. This is, of course, a big misrepresentation.

My dinner at Kabab & Curry was actually one of the more distinctive samplings of what was markedly different from Indian food. The differentiation is partly political.

However, in the years since the 1947 Partition, Pakistan has evolved a distinct national culture that sets its cuisine apart from that of the states in northern India. Aside from the Islamic restrictions that helped define its cuisine, there is a Persian influence from the west, and geopolitics have since brought it closer to the Arab world.

The billowing smoke outside turned out to be a very vigorous charcoal grill, which produced the excellent, smoky skewers.

The place has roasted chicken and other barbecued dishes, which arrive very well done, as they tend to do in the subcontinent.

But far more interesting are the stews.

The butter chicken dish was made mostly with breast meat but was tender and well-flavored. The karahi, a traditional Pakistani dish (although the Indians claim it to be theirs, too), is usually made with chicken but you can also opt for beef or mutton variations; we went for mutton.

It went very well with the cholla masala (alternatively spelled chole or chana), chickpeas in thick, spicy gravy, simmered until they were almost mushy.

And everything went very well with the biryani of long-grained rice, which was, somewhat unexpectedly, laced with chillies. So, to douse the heat of the karahi and cholla we would shovel a mouthful of rice. But it had the opposite effect.

Which meant we ate more karahi and cholla, until we finished all the food and sat in a sweating, huddled heap. This was unadulterated, spicy bliss.

What I would go back for is the haleem, perhaps the most representative of Pakistani dishes, with its mix of meat falling off the bone, in a masala thickened with lentils (usually a mixture). It was pointed out to us that we already had the chickpea stew and the karahi mutton, so we went for a paneer in spinach sauce instead (which turned out to be somewhat middling).

Haleem is popular all the way to Iraq and Afghanistan and is one of the dishes served at sunset during Ramadan to break the fast.

Kabab & Curry’s owner, or at least some manager, was bustling around and served us some gulab jamun on the house. He can also help you pick your order, as he keeps an eye on the kitchen.

If anyone remembers the New Bombay restaurant, when it was beside a vulcanizing shop at Citiland, with its clear, delineated and punchy flavors, that is what the cooking in Kabab & Curry is like.

After searching in vain for an Indian restaurant worthy of the name, this Pakistani hangout might be the closest we’ll get to real subcontinental cuisine in Manila (outside of people’s homes). There is also the consideration that while I’m always up for another trip to India, my US visa is up for renewal, making it unlikely that I would visit Islamabad any time soon.