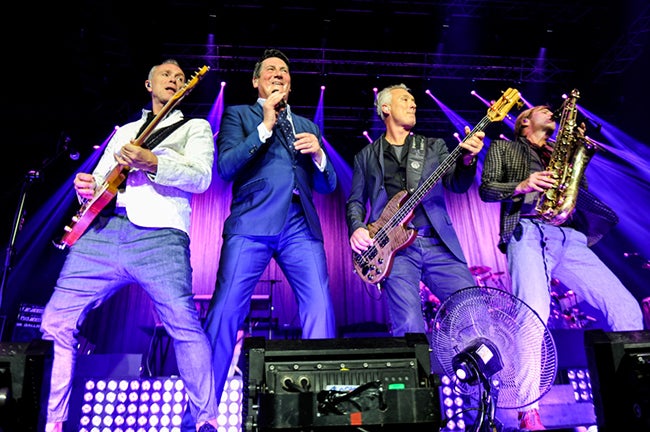 THROUGH the barricades. After a lengthy hiatus, Gary Kemp (guitar), Tony Hadley (vocals), Martin Kemp (bass), Steve Norman (saxophone) and John Keeble (drums, not in photo) are back and stronger than ever. MAGIC LIWANAG/OVATION PRODUCTIONS

How Spandau Ballet stays true to the sound of its soul

Starting out as a youth cult band in the politically turbulent ’70s, Spandau Ballet changed direction (and outfits) from postpunk New Romantic minstrels (the so-called Blitz Kids) to suave Europop sensations in the ’80s.

Looking at the band’s early group photos, one would think that its members—Tony Hadley (vocals), Gary Kemp (guitar), Martin Kemp (bass), Steve Norman (guitar, saxophone, percussion), and John Keeble (drums)—had all the elements of a quintessential boy band: looks, talent and onstage charisma, not to mention hordes of screaming fans. One clarification, though: “Spandau was never a boy band,” Norman told Inquirer Super in a recent e-mail interview. “I’ve always understood boy bands to be manufactured. We are no more manufactured than, say, The Beatles or Led Zeppelin.”

In the Spandau Ballet documentary film, “Soul Boys of the Western World,” we also see the band’s struggles: breaking up in the ’90s; getting embroiled in a legal battle amongst themselves over song royalties; and then, in a surprising twist, reuniting in 2009 and launching a successful world tour.

[In making the film] what made you decide to exclude outside input or commentaries from other people?

It is the Spandau story as told by the band members. When I was recording my vocal narrative I felt as if I was pouring my heart out and saying stuff which I wouldn’t have dared say before, not wanting to rock the boat and because it was nobody else’s business. But I felt that it was important to be truthful if the film was going to have any impact and set itself apart from all the other rock docs out there. Given these intimate and personal confessionals, why would we then ask a third party to give their subjective views on the band, when you’ve got it from the horse’s mouth, so to speak.

You took on the name Spandau Ballet after a journalist saw it on a toilet wall in Berlin and you found it “exotic.” Didn’t the macabre origins of the term spook you when you realized what it actually referred to?

It depends as to what term you are referring. I’ve heard several interpretations. Although I do admit, they are all mostly macabre. I would like to know what happened to the band that originally wrote “their” band name on that wall and if they lived to regret it. I’d love to hear their music. Maybe they were an actual ballet company and didn’t make music at all.

Your musical evolution includes being influenced by David Bowie’s constant metamorphosis. Was there a specific point in your career where you stopped changing and just stayed true to your soul roots? Or are you still open to adding new elements to your sound?

Bowie had a huge influence on me and the rest of the band. His ability to reinvent himself perfectly suited the spawning New Romantic movement. He was our guru. He is also influenced by different genres of music as we, Spandau, are. We are always looking to add freshness to our sound, maybe take it so deberé complétela diferente. But inevitably it still sounds so very like Spandau. I guess our musical personalities are so well-developed that we can’t escape it. We are instantly recognizable on record and that’s a good thing.

Romantic overtures aside, “True” is a classic example of when the melodic hook is just as iconic as the lyrics. Have you ever had fans and strangers alike identify you or your band by that hook, or come up to you humming it?

People who don’t know the name of the band or our faces are often surprised by how familiar they are to our music. I think it is very special to know someone through music. Some of my closest friends I have clicked with whilst performing onstage even if I knew them before offstage. By the way, people often sing along to the sax solo of “True.” That makes me proud.

What do you think makes your songs so timeless?

Did the band’s comeback (at last year’s SXSW festival) make you feel like you’ve all simply picked up right where you left off, or did it feel like an entirely new experience?

It felt like a comfortable pair of shoes. Very familiar, very comforting. Only this time the spring was coiled tighter than ever… And then … Bammm!

The band released a “Very Best Of” compilation last year with three new tracks added. What’s the story and inspiration behind the new songs?

We were talking about a “Best Of” release but wanted to show people that we were not residing in Retroland. So the best way to prove it is to write new stuff. Two songs swiftly turned into three which we recorded with Trevor Horn. It was such a pleasant and creative experience, I’m sure that next year there will be even more new Spandau material. That is, of course, if we don’t decide to take another 20 years off!