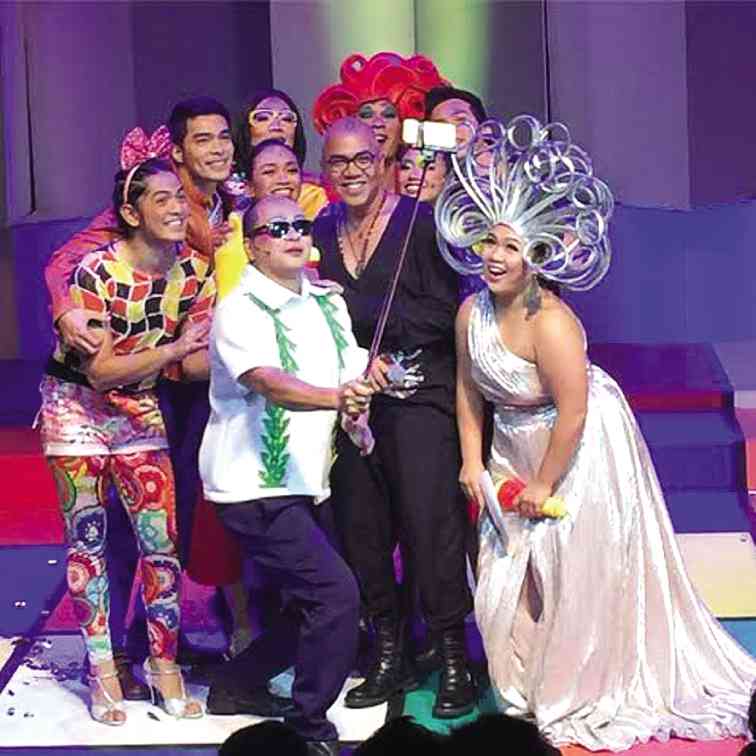 THE CAST of “Chuva Choo Choo, theMr. Kupido Musicale” with celebrity guest judge Boy Abunda in one of the show’s performances

‘Chuva Choo Choo, the Mr. Kupido Musicale’–more like a TV musical-variety show than a stage musical

Chuva Choo Choo, the Mr. Kupido Musicale,” mounted by Stages Production Specialist, and written and directed by George de Jesus III, shows promise when it comes to long-term popularity and a good run, judging by the enthusiastic audience who laughed, cheered and sometimes cried at all the right places during the musical’s five-show “trial run” at Power Mac Center Spotlight in Circuit Makati last week.

Some of them even sang along when the various characters belted out the more popular songs of composer-lyricist Vehnee Saturno, whose long hit parade made up the score of the jukebox musical. (Doris Saturno and Tito Cayamanda are also named as English-language lyricists.)

By the end of the first act—the show runs less than the traditional 2.5-hour running time of musicals—the fourth wall had already been breached. The cast members could complain tongue-in-cheek about the current limitations of this production—a sound system gone awry, a stage design that did not quite give the audience a good view of the proceedings—and the audience lapped it all up. The viewers had become that comfortable with the theatrical goings-on, and they were more than ready to join the ride, into whatever twists and turns the musical would take them.

The cast of characters are fairly recognizable figures. Regardless of the whimsical plot they have been thrust into, these are people many of us encounter, if not work or live with on a regular basis: Dina and Darla (Joanna Ampil, Morissette), talented sibling singers who want to break into the business but can never find the right break; Nenita (Ross Pesigan), their childhood gay friend-cum-talent-manager who will be with them through thick and thin; Tonton, the handsome but supposedly philandering boyfriend (Jojo Riguerra); Zandro (Edward Benosa), the call center guy living on the generosity of his gay older brother; the said gay older brother, Zsa Zsa (Juliene Mendoza), who runs a bar with two of his catty impersonator “sisters” (Ron Alfonso and Jay Marquez), and the sweet protective aunt (Via Antonio, who plays some seven other characters—hysterically.)

It was easy to sympathize with these characters, and equally convenient to just bask in the richly melodic songs, the sudden impromptu numbers and the funny scenes that were hilarious but, unfortunately, oftentimes did not contribute to the plot or character development.

The cast members played off each other so well that their combined chemistry drew the audience in—but some scenes became their own individual attraction, without adding to the plot or the characters’ stories.

This was all fun—and it’s the kind of fun that the audience has become familiar with in popular musical-variety shows on television. The stage design by Tuxqs Rutaquio was appropriately gaudy, flooding the stage with loud colors and yet still giving the impression that this was a bare-bones production—which justifies the cast’s own catcalls against the slightest technical deficiency.

Still, it would have served the production better if some of the numbers were trimmed down. In the hands of less talented performers, these numbers would have been a drag—but for Ampil and Morissette’s powerful pipes, and Mendoza, Alfonso and Marquez’s engaging warbling.

The direction also cried out for more cohesion; some scenes were happening on stage and at the side rows simultaneously, dividing attention or obscuring dialogue.

A longer, presumably more polished run of this musical is slated for early 2016. It may be a substantially different show by then, but from what we saw, the challenge for the viewers is to accept this material for what it is—and save themselves the effort and struggle to make something out of the thinner-than-thin plot, which involves corrupt mayors, warlord violence, transgender identities, minorities marginalized in society, the challenge of succeeding in the entertainment world, etc. None of them are treated with anything other than a sense of levity and unapologetic fun.

To be fair to the creative team, there seemed be no pretension to be otherwise. Just consider the elements that kept one scene rolling into the other: rib-tickling comedy skits with witty puns; entertaining song-and-dance numbers that seemed shoehorned into a (barely-there) dramatic thread, and superficially written characters who became engaging mostly by the strength of their performances and their dynamics against each other.

“Chuva Choo Choo, the Mr. Kupido Musicale” was a TV musical-variety show transported to the stage. Come next year when it makes its full run, manage your expectations, and sit back and enjoy the silliness.