Have you got your adult coloring book yet? | Inquirer Lifestyle ❮ ❯ 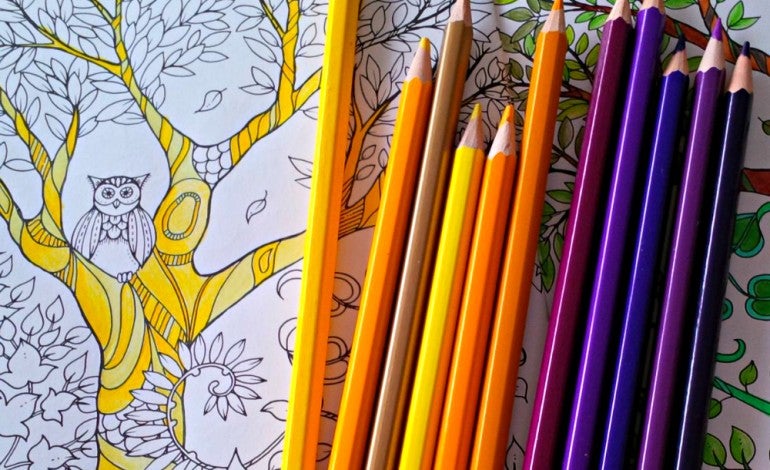 Have you got your adult coloring book yet?

When she talks about coloring, it sounds as comforting as having an icy cold glass of tea on a scorching hot day.

“You know how some people have to read before they go to bed? I color before I sleep, I find it has a calming effect on me,” says Lalitha Balakrishnan, 32, adding that coloring books combine her love for color and her desire to create beautiful art.

No, Lalitha is not fighting her four-year-old daughter to color in the tot’s books. She’s talking about the latest hobby that is sweeping grown ups off their feet: coloring books for adults.

These books have been inundating bookstores in countries like the United States and Britain for a few years now but have only begun making their presence felt in Malaysia this year.

In fact, the first coloring book titles appeared on local bestseller lists just a couple of weeks ago. And this week’s non-fiction bestsellers list has six on it!

Why, we wondered? What is it about this activity usually associated with young children that is drawing all this adult attention?

For some, it is precisely this association with childhood that prompts a re-connection.

“Sometimes, when life gets too stressful and difficult, we want to return to a time when we felt safe and secure. Psychologists call this ‘regression,’ a defense mechanism that helps us deal with stress by reverting to a childlike behavior,” explains clinical psychologist Alex Lui An Lieh, who heads Help University’s department of psychology.

Like chewing on your pen or hugging a teddy bear to feel better, coloring books can be another form of regression.

“For most of us, childhood holds happy memories. These behaviors are a way to transport you back to the good old days,” Lui says.

While some of these books are surfacing with “art therapy” and “anti-stress” proclamations on their covers, Lui is cautious about the claims.

“It would be safe to say that coloring books might be therapeutic,” Lui carefully states. “But trained art therapists would be hesitant to call coloring ‘art therapy’, which is often embedded in certain psychoanalysis or person- centered therapy.”

Art therapy is used as a form of expression involving an interaction between the therapist and client or patient, while coloring books can be done without any involvement with a therapist.
“While coloring books can temporarily reduce stress, art therapy deals with deeper underlying psychological issues of emotional conflict, self-awareness and personal growth,” Lui explains.

Sceptics might caution that the “art therapy” part might be little more than a mere marketing ploy – “But just like any marketing ploy, it is based on either meeting a need, or if there is no such need, to then create a need,” says Lui.

“Fortunately, the need to de-stress really is something that everyone needs to do. Therefore, these coloring books may be another method adding to the myriad of stress-relief techniques already available out there.”

Even if all they do is make people feel all fuzzy and nostalgic, coloring books have lots of fans judging by the many newspaper and magazine articles we’ve come across waxing lyrical about them – a huffingtonpost.com review of one such book at Amazon.com says, for instance, “There are few art forms as meditative, nostalgic and all-around blissful as the coloring book.”

In fact, the “father of analytical psychology,” Carl Jung, no less, used coloring as a relaxation technique in the early 20th century, according to huffingtonpost.com.

So they’re relaxing, and have been known to be relaxing since the 1900s – why the explosion of interest at this point in time? Has coloring become like animated movies nowadays, which are designed to appeal to kids as well as adults?

If so, we can trace all this new interest to Johanna Basford. Just as Pixar Animation Studios helped change how adults perceived cartoons with the cross-generational Toy Story movies (1995, 1999, 2010), in the world of coloring books, a similar paradigm shift could arguably be laid at Basford’s door.

The Scottish artist and commercial illustrator’s first book, “Secret Garden: An Inky Treasure Hunt and Coloring Book,” published in 2013, was a huge hit.

The complicated illustrations are far from childish. Lovingly hand-drawn in black ink and pen, they feature all kinds of foliage and curious creatures to bring to life with color on heavy, art stock paper.

About two million copies of the book have been sold worldwide, says the blurb at the book’s Amazon.com listing.

According to an article in The New Yorker, Basford, who specializes in designing wine labels and perfume vials, was initially asked by British publishing house Laurence King to illustrate a children’s coloring book. She convinced them of the potential of a coloring book for adults instead.

And the rest, as they say, is history.

Basford’s follow-up, “Enchanted Forest: An Inky Quest and Coloring Book” (2015), has also been a bestselling book on Amazon.com.

Now, the fans she has amassed over the last two years or so are waiting with bated breath for her next book, “Lost Ocean: An Inky Adventure And Coloring Book,” to be released at the end of the month.

Enthusiasts just can’t get enough of such books, and this has set off a publishing onslaught that certainly seems to be giving the children’s category a run for its money.
Since Basford’s books, other designers have jumped on the bandwagon and the range of designs has expanded with everything from geometric designs to more organic motifs and asymmetrical forms on offer now.
Pop culture also has inevitably found its way into them: a book with a theme based on hit fantasy TV series “Game of Thrones” will be available in Malaysian stores soon.

According to MPH Bookstores book merchandiser Chin Poh Choo, the bookstore chain started noticing a surge in demand for these books as early as April this year, after Korean dramas featured their beautiful people deep in thought while filling up black and white pages with color.

(A typical scene? The female lead alternating between coloring in her book and checking her phone, willing the leading man to call her.)
Generally, books with elaborate and intricate designs such as Basford’s titles, and by extension, nature-themed motifs, are proving to be the most popular by far in Malaysia.
So far, that is. As demand grows, Chin feels customers’ tastes will broaden. “In order to provide more variety, we are bringing in other themes like animals, architecture, travel, and patterns like mandalas and zentangles,” she explains, adding that coloring books with a story line are also in the pipeline.

That sense of accomplishment
Perhaps part of this activity’s appeal lies in the fact that practically anyone can pick up a coloring book and simply start immediately.

This element of immediacy and instant gratification is certainly attractive, particularly for those who have always thought they didn’t have enough artistic ability to start an art project, Lui comments.

“Almost anyone can just pick up a coloring pencil and add color to an already drawn picture, after all.”

He adds that for adults, there is also more gratification in seeing a well-produced work of art now that we have better motor skills, are able to make better color choices, and can color inside the lines.

“We all get a natural sense of reward when we create something. It is easier to color a picture already drawn rather than to draw your own picture if you do not have the skills for it,” he says.

She actually draws and paints on her own, but the coloring books still appeal to her because working on them does not require as much planning before starting.
It eliminates a barrier that can be intimidating for many people who give up even before they have started.

“Whenever I feel like it, I can start coloring right away. I think everyone can be artistic if they develop their talent, but for those who are convinced that they are not, coloring books are a great place to start,” says the cytogenetics technologist turned homemaker.

With paintings, it often isn’t easy for the uninitiated to imagine how to get to the finished product when faced with a blank canvas.

“It looks like a lot of work and you don’t know where to start. But coloring books give you hope. They help people who never thought they could do art; they help them tap into their artistic ability,” says Lalitha, who plans to frame her best works from the books and give them away as housewarming gifts.

This trend could have been encouraged when these coloring books were given a “category” of their own, i.e. “for adults,” thus helping to make coloring a more socially acceptable activity for grown-ups.

Does all this mean coloring books for adults are here to stay? Or are they a passing phase? It’s a question publishers thinking of investing in this new genre of books will have to answer.

Chin is convinced that this is a trend that will linger, eventually evolving into an established hobby, much like with jigsaw puzzles.

It could also develop interesting branches: American teacher Susan Striker published a series of “anti-coloring” books beginning in the 1970s; she believed that coloring books had “damaging effects” on young children, as the already-drawn images defined the task too strictly and hindered creativity and imagination.

Her books actually look pretty fun, albeit looking more like activity books for children rather than what you would imagine when you think “coloring book.”

A sample page: lots of white space and a caption that reads, “This clown has learned how to become invisible. We can only see this circle. Which part of the clown do you think this circle is?”

Interestingly, in the early 1980s, she came up with a version of an anti-coloring book for adults, titled “The Anti-Coloring Book For Adults Only.”

Coloring or anti-coloring, it looks like there will be a lot more color in adult lives now.