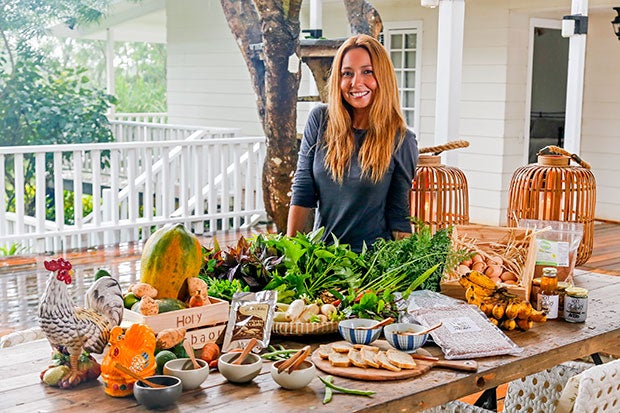 HOLY CARABAO Hindy Weber Tantoco on the family porch, with some of her farm’s organic produce and products she sources and sells. Photos by PJ Enriquez

WHEN HINDY Weber Tantoco and her family decided to trade the daily stress of living in the city for life on a farm, she didn’t expect to get bored, not even when the children were in school. She focused her energies on gradually turning their house—cleverly made out of container vans—into a home.

In time she began tending a vegetable garden. The garden  was meant originally to meet her family’s needs, but it has  since grown into the thriving organic vegetable business,  Holy Carabao. It is fast developing a select market.

For 10 years Hindy had thrived on and fed off the stress  that came with designing seven labels for Rustan’s  Department Store, which included Culte Femme and U.  Now, she has other priorities, which make her feel more  fulfilled as a wife and a mother.

“I was working non-stop. There were deadlines to beat so  at the end of the day, I always ended up bringing home  work,” she said.

When the chance to move to Sta. Elena in Canlubang,  Laguna, presented itself, she gave it all up so she and her  husband Gippy Tantoco could attend to their children.  They now have four, their youngest just a year old.

“We gave up the house in Makati because we felt it was too  excessive— having two of everything: refrigerators, washing machines. We didn’t know which one was our home,” Hindy said.

Their new house was inspired by the plantation houses in Hawaii that she had seen during a family vacation.

“I also liked the raised huts (bahay kubo) that I saw in Bohol, but it was really Gippy who wanted to use container vans. Based on that we already had limitations on what we could and could not do so it evolved from there.”

The result is a cohesive look and consists of several raised rooms connected by a deck that overlooks a view fringed with trees and carpeted with grass. The wide expanse of green is a restful sight and one that Hindy enjoys showing guests. Even if it was raining the entire morning, she chose to serve lunch out on the porch—the better to enjoy the rain-cleansed view.

The house is divided into two wings: the rooms in the bedroom wing are connected by walkways; the same goes for the kitchen and other work areas.

“I have a little office where we do a lot of the preparations,” she said.

Hindy said that this layout allows an option to add rooms especially since her teenaged son might want to have his own room.

“We might have to make a new family den.”

Somehow one gets the feeling that Hindy will take on this home expansion project with as much vim and vigor as she did with the family’s vegetable patch.

At first, she grew “bahay kubo” vegetables but the types of vegetables and the amount of land devoted to growing them have since expanded.  After three years, the harvest now includes different lettuces, herbs, citrus fruits and the suddenly popular kale.

“This demand for kale has really grown the past year alone. Before then, no one knew what kale was, but now it’s one of our most popular products,” she said.

During our visit to her home, Hindy talked authoritatively about beekeeping, foraging for edible weeds and preparing vermi compost.

“I joined a workshop on farming and beekeeping because I wanted to grow vegetables for my family, make my own honey. It started out as a necessity plus I got so bored while the kids were in school,” Hindy said.

Once they were blessed with an oversupply of vegetables, she went to her children’s school “like a palengkera with a bilao and told them, ‘Hey, buy naman from me, we have so much.’”

The small business basically grew from there. Tantoco would get a booth during the Christmas fairs, then the mothers began asking for more premium crops such as lettuces, tomatoes, carrots with their tops still intact and kale, items that were harder to find.

“We now deliver twice a week, Tuesdays and Thursdays, to places like Las Piñas and Makati and as far away as Novaliches and Antipolo. We have a delivery charge that some clients say is too high, but then we tell them that if they had to go to a mall, then they would have to gas up, pay the parking fee, etc.,” she said.

From a frenetic lifestyle that used up most of her time and left her feeling burned out, Tantoco is now surrounded by calming green vistas everywhere she looks.