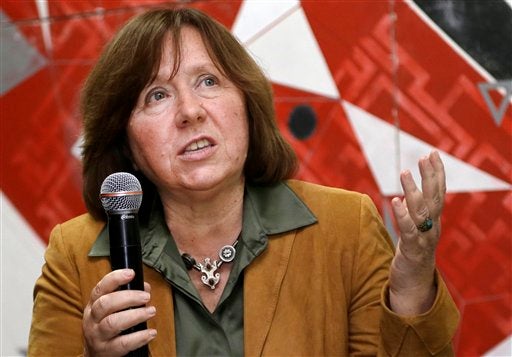 STOCKHOLM — Belarusian writer Svetlana Alexievich won the Nobel Prize in literature on Thursday for works that the prize judges called “a monument to suffering and courage.”

Alexievich, 67, used the skills of a journalist to create literature chronicling the great tragedies of the Soviet Union and its 1991 collapse: World War II, the Soviet war in Afghanistan, the 1986 Chernobyl nuclear disaster and the suicides that later ensued from those mourning the death of Communism.

The Nobel academy’s permanent secretary, Sara Danius, praised Alexievich as a great and innovative writer who has “mapped the soul” of the Soviet and post-Soviet people.

Her first novel, “The Unwomanly Face of the War,” published in 1985 and based on the previously untold stories of women who had fought against Nazi Germany, sold more than 2 million copies.

Her books have been published in 19 countries, with at least five of them translated into English. She also has written three plays and the screenplays for 21 documentary films. The Swedish Academy cited Alexievich “for her polyphonic writings, a monument to suffering and courage in our time.”

“It immediately evokes such great names as (Ivan) Bunin, (Boris) Pasternak,” she said, referring to other Russian writers who have won the Nobel Prize for literature. “On the one hand, it’s such a fantastic feeling, but it’s also a bit disturbing.”

She was at home “doing the ironing” when the academy called. Asked what she was going to do with the 8 million Swedish kronor (about $960,000) in prize money, she said it would allow her to write more.

“I do only one thing: I buy freedom for myself. It takes me a long time to write my books, from five to 10 years,” she said. “I have two ideas for new books, so I’m pleased that I will now have the freedom to work on them.”

Born in the western Ukrainian town of Ivano-Frankviska to two village schoolteachers, Alexievich studied journalism in Belarus, which at the time was part of the Soviet Union.

She now lives in Minsk, the capital of Belarus, and like many intellectuals supports the political opponents of authoritarian President Alexander Lukashenko, who is up for re-election on Sunday.

This year’s Nobel announcements continue with the Nobel Peace Prize on Friday and the economics award on Monday. All awards will be handed out on Dec. 10, the anniversary of prize founder Alfred Nobel’s death in 1896. TVJ