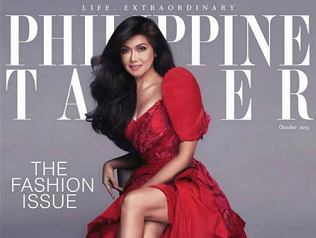 The 60-year-old Marcos, daughter of the late dictator Ferdinand Marcos and Ilocos Norte Rep. Imelda Marcos, graced the cover of the Philippine Tatler’s October fashion issue, where she was photographed wearing a red Filipiñana gown and with her feet bare. Her mother, a former first lady, was known for her expensive shoe collection.

The words “beautiful, strong, and enigmatic” were also printed on the cover.

Some netizens expressed admiration for Marcos for “still looking young and beautiful” in spite of her age.

“Still fabulous and gorgeous as ever! Ang Dyosa (The Goddess)! Carry on po, Idol Madam Imee!” said Catherine Manuel-Ferrer in a comment on Marcos’ Facebook page.

(Wow, beauty in and out, hardworking, really nationalistic at heart and known as the “photocopy brain.” I hope someday she will become the President when the right time comes.)

Others, however, criticized the cover, saying that Marcos underwent plastic surgery and that the photo was heavily edited. Facebook users also brought up the human rights violations committed during the dictatorial rule of Marcos’ father.

“Philippine Tatler Editors: Have you sunk this low? True beauty at 60 has nothing to do with a re-configured-with-plastic-surgery face and body. True beauty at 60 comes from a life well lived in the service of others. Imee Marcos shares the shame and guilt of her father and mother,” said Susan Quimpo, referring to Martial Law victims.

“Philippine Tatler, while you present taste in all things luxurious, this time you promote no taste. If it weren’t for us taxpayers, she won’t have that glamour you’re featuring her for,” Nizrhane Abdallah said.

Lorraine Marie Badoy, daughter of former Sandiganbayan Associate Justice Anacleto Badoy, said Marcos did her homework well by getting “one of the best plastic surgeons to chainsaw her baba (chin) and anime her eyes and god knows what else.”

Badoy said Marcos’ red gown was reflective of the blood shed in the atrocities committed during her father’s regime.

“I see how massive wealth stolen from a country bleeding and down on its knees can be used to buy not just respectability but oh-darn-god adoration from the very people this family of shameless thieves have bled dry,” Badoy said. “And I see red, Imee. I see the blood of thousands of martyrs of Martial Law–bloodied, hogtied, chopped with evidence of severe torture, rape.”

“So yeah, I look at the heavily-photoshopped, massively-plastic-surgeried Imee and I see the truth Marcos loyalists do not want to see and what the deeply asleep cannot see: A monster who continues to live in vulgar extravagance with wealth stolen from generations of Filipinos. Someone who is part of that family of obscene fucks who stole our country’s bright future and has done so without a tinge of shame nor remorse,” she added. YG/RAM

Here’s what other netizens have to say: