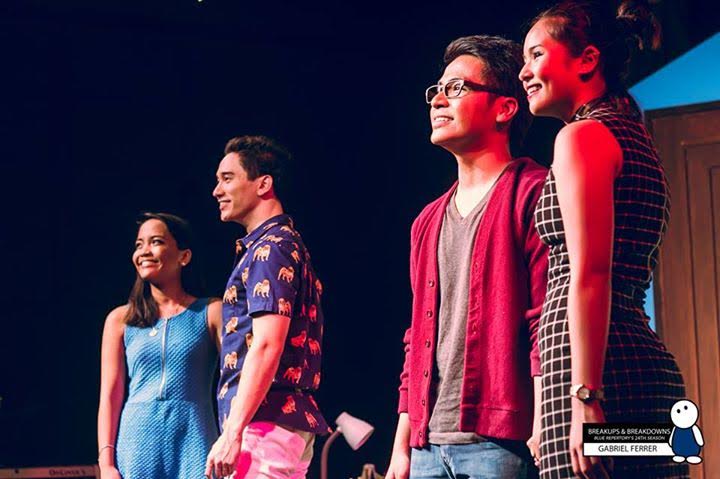 Angela Mercado, Raffy Nepomuceno, AM Masucol and Celine Bengzon in Ateneo Blue Repertory’s “Breakups and Breakdowns”—directed by Reb Atadero, with music by Rony Fortich and book and lyrics by Joel Trinidad. PHOTO FROM ATENEO BLUE REPERTORY

Blue Rep and ‘Breakups and Breakdowns’ make a surprising match

You’d be hard-pressed to find a more agreeable onstage marriage between man and material these days than at the Ateneo’s Fine Arts Theater, where Blue Repertory’s “Breakups and Breakdowns” closes tonight after a three-week run.

Despite the middling material—book and lyrics by Joel Trinidad, score by Rony Fortich—it’s marvelous how “Breakups” gels so seamlessly with the capabilities and sensibilities of its young performers, this small band of college students finding youthful vitality in a sea of banality.

Trinidad’s writing flounders in shades of all-too-eager cleverness and not-too-deep heartache, a mixture obviously patterned (but not perfected) after American TV sitcoms such as “Friends” and “How I Met Your Mother.” It’s the choice of entertainment of the modern, young and educated, in which jokes are exchanged at lightning speed and romances wither in the blink of an eye.

“Breakups” presents us with a foursome—roommates Mark and Derek, and the women in their lives, graphic designer Nina and (what’s her description again?) Sandy—singing largely forgettable music about falling in and out of love (though, admittedly, Fortich has woven a couple of memorable moments in “Boy Meets Girl” and “Tell Yourself”).

Where new ground is concerned, none is broken by “Breakups.” It’s another millennial story of privileged people dealing with their First World problems. We’ve seen this before in The Sandbox Collective’s “No Filter,” a monologue series about the middle-to-upper class millennials of Manila, which is currently enjoying a second run at the Black Box Theater in The Circuit, Makati City.

Whereas “No Filter” generates its appeal largely through the inspired writing, Blue Repertory’s “Breakups” simply has to look around and within itself. It’s the English-spouting millennial Atenean stereotype at play, but really, milieu—or people’s perception of it, at least—has never played a more integral part in the relative success of a show.

As the perfect company to put on an English-language show about vaguely American people and their love problems, Blue Repertory more than delivers; this “Breakups” has a beating heart that is as familiar as it is convincingly alive.

Not for a second do we doubt that these performers can indeed assume these fictional identities; the glass slippers fit perfectly, so to speak. That, and the fact that Reb Atadero’s direction is an admirable exercise in restraint and streamlining.

Devices are employed sparingly but effectively. In a particularly stirring rendering of
romantic irony during the opening song, the sight of Mark and Nina kissing for what appears to be the first time is contrasted with voice-overs of missed telephone calls and glum good-byes.

The girls in particular—Celine Bengzon as Nina and Angela Mercado as Sandy—emanate a kind of radiant freshness generally seen only among the pros. They sing ravishingly and never overdo their acting; they could very well be the people they’re portraying, and we’d totally buy it.

It’s this comfort with the material that ignites the enjoyment in “Breakups,” even though the choreography could use more polish and theatricality, and the singing becomes tentative when it comes to those insipid low notes (not the performers’ fault).

Doomed lovers’ quartets are, in fact, nothing new. Patrick Marber’s “Closer,” last staged in Manila two years ago by Red Turnip Theater, is the quintessential example. (Perhaps viewers are more familiar with it through the 2004 film starring Natalie Portman and Julia Roberts.)

It would be quite a stretch to call “Breakups” a “Closer” for a G-rated audience. The latter features thrilling verbal jousts, each person clawing at the other’s veneer, willed to expose his or her frailties—a Russian roulette of toxic romances set to the foul language of distrust and betrayal.

“Breakups” has nowhere near as much emotional gravity. Mostly, it attempts to be serious, and be taken seriously, then retreats to its cozy shell of familiarity. But as staged by Blue Repertory, the conflicts unexpectedly become compelling, and the people in it, real. Or as millennials would say it, totally relatable.

E-mail the author at [email protected], or visit him at www.vincengregorii.blogspot.com.