C.S. Lewis stepson Douglas Gresham coming to Manila to grace the premiere of ‘The Horse and His Boy’ | Inquirer Lifestyle ❮ ❯ 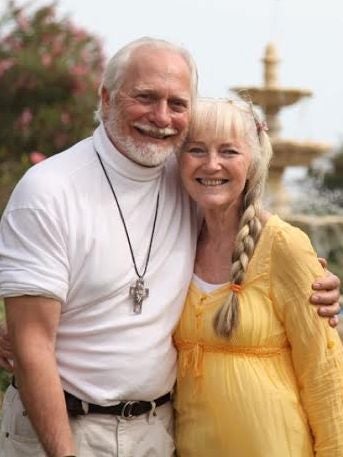 Douglas and Merrie Gresham. C.S. Lewis dedicated “The Horse and His Boy” to the then 9-year-old Douglas. PHOTOS FROM LUNA GRIÑO-INOCIAN

C.S. Lewis stepson Douglas Gresham coming to Manila to grace the premiere of ‘The Horse and His Boy’

Douglas Gresham is coming to Manila for the world premiere of Trumpets’ adaptation of C.S. Lewis’ “The Horse and His Boy” on Nov. 6. But who is he and why is this such a big deal?

For starters, he is the stepson of C.S. Lewis himself, the son of Lewis’ wife, Joy Davidman, by her first husband William Lindsay Gresham.

Also, the book “The Boy and His Horse” is dedicated to the then 9-year-old boy and his brother. The dedication reads: “To David and Douglas Gresham.”

Lastly, Gresham is a C.S. Lewis biographer, an executive record producer, the coproducer of the three film adaptations of “The Chronicles of Narnia,” and creative and artistic head of C.S. Lewis Company Ltd.

As such, he vets all new scripts for plays, both amateur and professional, based on his stepfather’s work, “to protect the integrity of the original.” The same goes for TV and movies.

“I check on major stage productions and written works, illustrations and so on and so forth. It keeps me busy,” he said in an e-mail message. That means everything relating to “The Chronicles of Narnia” passes through him and his scrutiny.

This was how and why we met Douglas Gresham—and how he eventually became a dear friend.

It all began in 1995, when Trumpets decided to write its own adaptation of “The Lion, the Witch and the Wardrobe” (LWW) and had to apply for rights from C.S. Lewis Company to do it.

After a year, we got the go signal to adapt “Lion” into a musical, and the license agreement was signed.

Part of the agreement was to fly Gresham in to see the production. But previous engagements prevented him from coming to the opening in August 1997. He did, however, make it to the rerun in 1998.

A true-blue Lewis and Narnia fan, I was naturally excited and just a bit nervous about meeting Gresham. He did grow up with my “idol” Lewis and his good friend, another of my “idols,” J.R.R. Tolkien. That alone put him on the level of awesome!

Aside from that, he was coming to see something we had written and Trumpets had produced. I was on tenterhooks. We all were. What would he think? What would he say? Oh, please let him like it.

The first sight of him proved just as daunting. Tall, gray-haired with a goatee and garbed in a Dutch boy cap, turtleneck, trousers tucked into knee-high boots and a silver cross (an outfit we would learn is his signature wear), he strode toward me confidently and greeted me in a deep, throaty voice that had me thinking of Aslan, the Lion King of Narnia. Then, he took my hand in a firm handshake and smiled. And I felt a little bit better.

Douglas, as he insisted we call him, was witty and affable and a veritable font of knowledge about all things Lewis and Narnia. I was fast becoming his fan. Then he saw LWW and became our fan.

He loved it—or, using his own words: “I hugely enjoyed the production!” At a press conference that followed, he was asked to rate the production on a scale of 1 to 10 and he quickly answered, “An 11.” We were in heaven.

And it wasn’t just lip service, either. After the opening weekend, he left to do some work in Australia but, a week later, Douglas surprised the cast by returning to catch the closing show—at his own expense.

Then, in 2002, he surprised everyone yet again. This time, he brought his wife Merrie and their daughter Melodie.

“I felt that they just had to see it,” he said proudly. “It is one of, if not the most beautiful and moving versions of ‘The Lion, the Witch and the Wardrobe’ ever to grace the stage.”

From then on, Douglas and the C.S. Lewis Company would recommend the Trumpets version of LWW to all other groups interested in producing a Narnia musical. We have had several inquiries from theater groups in the United States, Brazil and South Africa because of that endorsement.

His confidence in the quality of our productions has also made asking for approval to do “The Horse and His Boy” faster, if not easier. Though we still had to go through the paces and Douglas remained exacting when it came to protecting Lewis’ work, we had our approval in a record two months, as opposed to the 16 months it took the last time.

More than those obvious benefits, however, we came away with something precious—a friendship that has lasted 17 years.

From 1997 up to now, we have kept in constant touch via e-mail, exchanging information both professional and personal. Some members of the cast have met up with him in New York and London to attend premieres of the film version of LWW, visited him in his former home Rathvinden in Ireland and his new home on the island of Malta.

Then, in September 2012, Douglas and Merrie came back to the Philippines to meet up with us, his Manila family. Trumpets threw them a grand party complete with banderitas, dirty ice cream cart and lechon. Cast and crew members from the 1997, 1998 and 2002 productions of LWW, many of whom were no longer children, came, sang songs from the show, reminisced, laughed, hugged and had a great time—just as families do at a reunion. 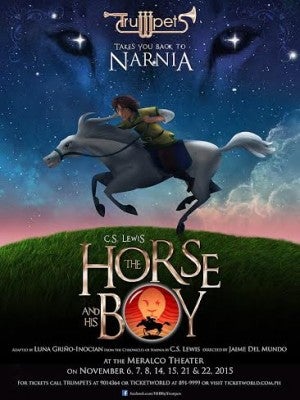 Now, another reunion is forthcoming as Douglas returns for the opening weekend of “The Horse and His Boy.”

When we asked him what he expected from this new production, he wrote, “The same kind of diligent care of the original material as I found in LWW, teamed with excellence of production and performance. I expect it to be an exciting and enthralling show with great emotional stimuli interspersed with humor and fun throughout. I also expect to see a wonderful stage spectacle and hear some great music. All the things in fact that Trumpets theater is renowned for.”

And the same apprehensions of 17 years ago return: Will he like the show? Will he appreciate what we’ve done?

Except they are a bit more pronounced now since his expectations are way up. But he also wrote, “I have seen kinks before and I expect some kinks. But I know that if Trumpets is doing it, it will all work out in the end.”

I can almost see him smile as he wrote that. And, once again, I feel better.