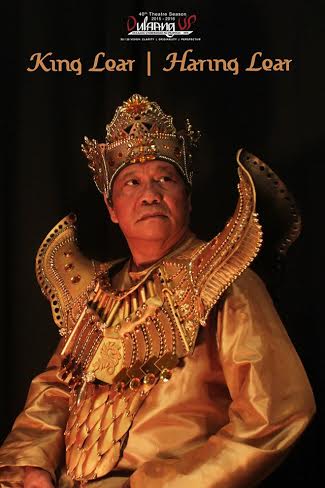 Joel Lamangan. PHOTOS FROM DULAANG UP

Filipinos have always taken pride in their personal care  when looking after their elderly loved ones, instead of relegating them to some forgotten nursing home. But a closer look at news reports reveals a disturbingly different story, one that hopefully does not develop into a trend. A number of senior citizens in their 70s and 80s are now being “turned over” to the nearest social welfare organization, or worse, abandoned outright, to fend for themselves in the marketplace or the streets.

Dulaang UP’s (DUP) current production of “King Lear” (it opened Oct. 7 and runs until Oct. 25 at Wilfrido Ma. Guerrero Theater in Palma Hall, University of the Philippines Diliman) may strike closer to home than other previous “Lear” adaptations due to two factors: its Southeast Asian setting; and the relevant questions it raises about family bonds and practices that are slowly being eroded in the millennial age, when reverence for tradition and age no longer has much currency.

The well-known story of Lear, which Shakespeare supposedly based on a legend of a king driven to madness, is brutal and unrelenting. The aging British king, on the eve of his retirement, divides his kingdom among his three daughters, Goneril, Regan and Cordelia, basing their portions on how best they would profess their love for him.

The two older scheming sisters get the lion’s share because of their sycophancy, while Cordelia, who genuinely loves her father, is disinherited because of her honesty and unwillingness to flatter.

It all goes downhill from there. Regan and Goneril turn against their father and literally strip him of his power and possessions. With only a handful of loyal friends who follow him at great risk to their lives, Lear flees to the wild country, losing his dignity and his sanity. Even the last-ditch effort of Cordelia (who marries the King of France) to save him ends in failure.

Lear and his youngest daughter are captured. While Lear is eventually set free by the returning friendly forces, Cordelia dies at the executioner’s hands.

Lamangan says he himself encountered the harsh reality of the neglected elderly in contemporary Philippines while shooting a number of television soap dramas, where some scenes were shot on location in homes for the aged. A few of the life stories of the old men and women who lived in these homes shocked him.

Political power play and the recurring motivations of greed and lust drive “Lear,” but Lamangan opines that it is this tearing of the family fabric that can make its Filipino adaptation resonate.

To Lamangan the actor, the challenge lies in portraying the gauntlet of emotions that the character comes to grip with and unleashes throughout this warhorse drama, as he faces betrayal time and again. “Lear” is arguably the stage role of a lifetime, and every senior thespian who wants to test his acting mettle sees it as the pinnacle of his career.

Laurence Olivier, Derek Jacobi, Ian Holm, Christopher Plummer, Paul Scofield and, recently, Ian McKellen, are just a few of the acting giants who have all assumed the mantle of the doomed king at late stages in their career, to critical acclaim. Scofield’s portrayal was even voted as the “greatest performance in a Shakespearean play” by the members of the Royal Shakespeare Company, according to a recent report in the UK newspaper Telegraph.

Rialp, who had first read the play in college, found it “overwhelming” after he reread it decades later in preparation for what he admits is a “dream role.”

“You could see the depth and breadth of the character, especially when he is put through the wringer in 11 scenes,” he says. “This petulant king who plays a game with his daughters is foolish to divide his land among them, and it makes him powerless.”

At the start of his decline, Lear is already 80 years old. Rialp does not see the character as a senile gentleman who just wanted to slow down and smell the roses; he glimpses a shadow of  the former conqueror and tyrant in the aging monarch.

“He is still witty and very philosophical,” Rialp says. “That tempers his anger. He can still play one daughter against the other. And that intelligence makes him more frightening. Remember that he still managed to kill the executioner who killed Cordelia while they were all in the dungeon.”

TV audiences who may be more familiar with the benevolent Almighty that Rialp essayed in “Oh My G!” may be surprised to see a darker side to the actor. Rialp is not just an accomplished actor but a seasoned stage director who honed his craft at a time when that role was of a demigod status, at least among an earlier generation of stage cast and crew.

“I used to be a much-feared director with those kinds of outbursts,” Rialp says, smiling. “The type that threw chairs and ashtrays. And let’s not forget, there was a time prior to ‘Oh My G!’ that whenever I was cast in a TV series, it was always as a mayaman na masungit na mestizo. So, in that sense, ‘Lear’ is not that remote to play.”

Rialp went into acting in 1995 after spending five years in the United States. It was a backup vocation, as he had to rebuild his directorial network for stage performances and corporate shows after being away from home. That struggle also made him come to terms with a sense of loss and restoration, especially in an industry where many younger and hungrier professionals are bent on climbing up quickly.

“You can see how the aged people are discarded today,” he says. “Young people these days listen to their own gurus. Before, elderly people were respected for their experience—and we needed those voices to temper us.”

Or, as he quotes from “King Lear” to illustrate the dilemma that old people are wont to face: “Is it the fashion that discarded fathers should have little mercies on their flesh?”