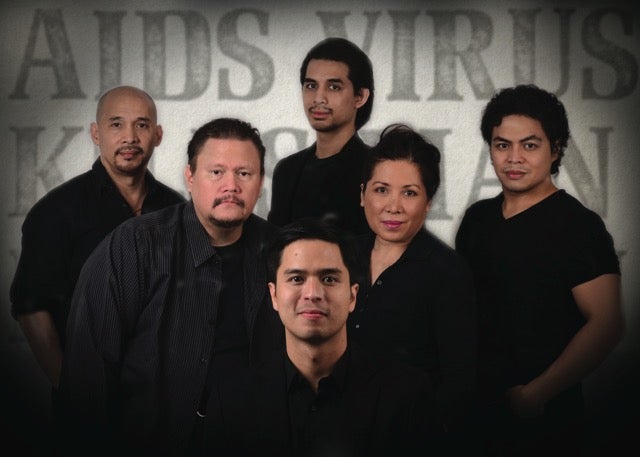 The cast members of “The Normal Heart”. CONTRIBUTED IMAGE

Why catch the final two shows of ‘The Normal Heart’ today

Loosely translated: Who is the bald actor? He’s so good!

This we overheard during last week’s staging of The Necessary Theater’s “The Normal Heart,” which is on its final two shows today, Sunday, at 3 pm and 8 pm at the Carlos P. Romulo Theater in RCBC Plaza Building, Makati City.

It was an honest-to-goodness reaction of a probably neophyte theater goer who was touched not only by the subject matter of the acclaimed play by iconic gay activist and author Larry Kramer but the highly-engaging performance of the bald actor.

Unless one or two actors got their top shove the past few days, the “kalbo” is veteran theater artist Bart Guingona, who acts in and directs the play.

One can’t help but notice how Guingona easily transforms from the mostly cantankerous, explosive character to a caring, charming lover.

Guingona plays Ned Weeks, the Jewish-American writer and gay activist who initiated the campaign in raising awareness about the spread of HIV virus in New York and eventually in the United States in the early 1980s.

Back then, it was an unknown disease, a mysterious epidemic among gay men.

“The Normal Heart” is said to be an autobiographical work of Kramer, whose writings and advocacies have contributed to the awareness and prevention of the spread of HIV, much like Ned’s. “The Normal Heart” was eventually adapted into film by HBO in 2014, with Mark Ruffalo playing Ned.

It is just but timely to have a local staging of the acclaimed Kramer play. Based on the latest statistics by the Department of Health this year, about 22 people a day are getting infected with HIV due to ignorance and carelessness.

“And they are not only gay men but heterosexuals,” said Guingona.

When The Necessary Theatre staged it for one weekend—five shows— in July this year, the theater season was at its peak, with shows here and there and audiences chose the more popular productions.

Many carelessly missed “The Normal Heart” and asked for an immediate rerun.

And it’s not because popular film-television actor TJ Trinidad was making his official debut in what he called “a serious play.”

Even actors of other ongoing musicals made a mad dash to Carlos P. Romulo Theater and hope to catch the final and fifth show of the limited run.

“Why did it end abruptly?” “Why only one weekend?” “Why did the tickets run out so fast?” “Why is Bart Guingona ignoring our requests for another weekend run?” “Why did I prioritize ‘Rak of Aegis’ when it is on a three-month run?”

The questions and excuses never end.

Now, again “The Normal Heart” is on the final day of its limited two-weekend run. And if you’re a theater lover, you would see it again and again. If only for Guingona and his equally brilliant co-actors.

The usual excuse of the lame is that if it’s that in-demand, could there be a third run, probably at the end of the year? If not, maybe just watch the film?

The urgency to experience “The Normal Heart” now, today, ora mismo is as alarming as its message for all Filipinos.

The magnificent “kalbo” actor said, “What happened in New York in the early 1980s is happening in the Philippines right now. Your health has become a political issue.”

(Call Tickerworld at 891-9999 and hope there are still tickets available.)