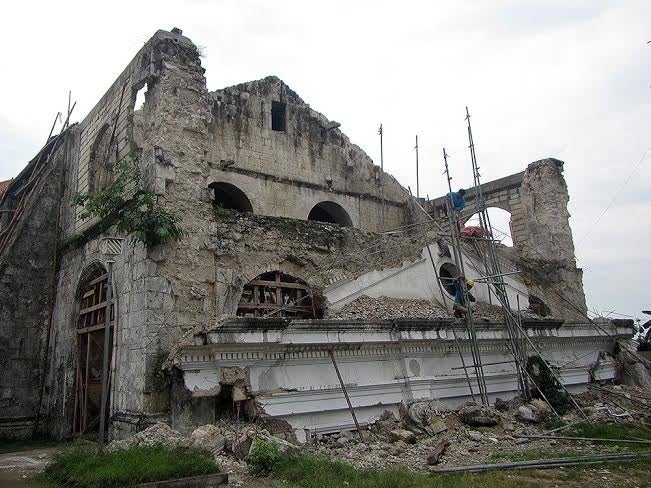 TWO years after the Bohol earthquake, and subsequent conservation work on damaged heritage structures by national cultural agencies, the National Historical Commission of the Philippines (NHCP) is now under fire for what critics say is the “second wave of heritage destruction” in the province.

They alleged that the pediment of the portico façade of Loay Church was torn down while architectural elements of the Dauis and Baclayon Churches had been demolished.

Marianito Luspo, heritage advocate and director of cultural affairs of Holy Name University in Tagbilaran City, said the NHCP contractors were working “without transparency,” refusing to consult Bohol stakeholders whose inquiries and expressions of concern on the questionable restoration work the former resented.

Luspo said the restoration techniques of the NHCP had “raised the eyebrows” of conservation experts.

“For instance, they (contractors) are using cement instead of lime-sand mixture,” he explained.

“In Baclayon they want to remove the palitada (lime plaster) of the interior walls supposedly to showcase the stonework,” Luspo added.

“In Loay, you saw how the old cement façade fell down to the ground almost intact. They could have relocated it somewhere; instead they chose to pulverize it.”

Luspo noted that miscommunication was a big factor in the controversy which could have been resolved through professional dialogue.

“However, the NHCP, by declaring that if criticisms do not stop they would walk out of their projects altogether, is acting both puerile and unprofessional.”

Another heritage expert, a conservation architect who requested not to be identified, criticized the NHCP for the lack of advice and monitoring on the contractors working on the ground.

Ivan Henares of the Heritage Conservation Society also expressed his dismay over the “demolition derby” in Bohol, which he said had left heritage experts, advocates and other cultural agencies “aghast.”

“Foundations of damaged or destroyed columns, the pediment of a church facade, all original elements of the damaged churches, have been demolished in the name of we don’t know what,” he compained. “Expediency? Heritage professionals have documented ‘demolition work’ in the churches of Loay, Baclayon and Dauis, all happening as we speak. The photos are heartbreaking.”

A meeting between the NHCP and the Diocese of Tagbilaran was held on Sept. 22 in which the agency presented its responses to the complaints.

Earlier, NHCP, in an e-mail to the Inquirer before the meeting, said it would comment on the issue only after the dialogue since it “would like to address [first] the immediate and primary stakeholders before anyone else.”

The Inquirer asked NHCP for its statement after the meeting but the agency did not reply.