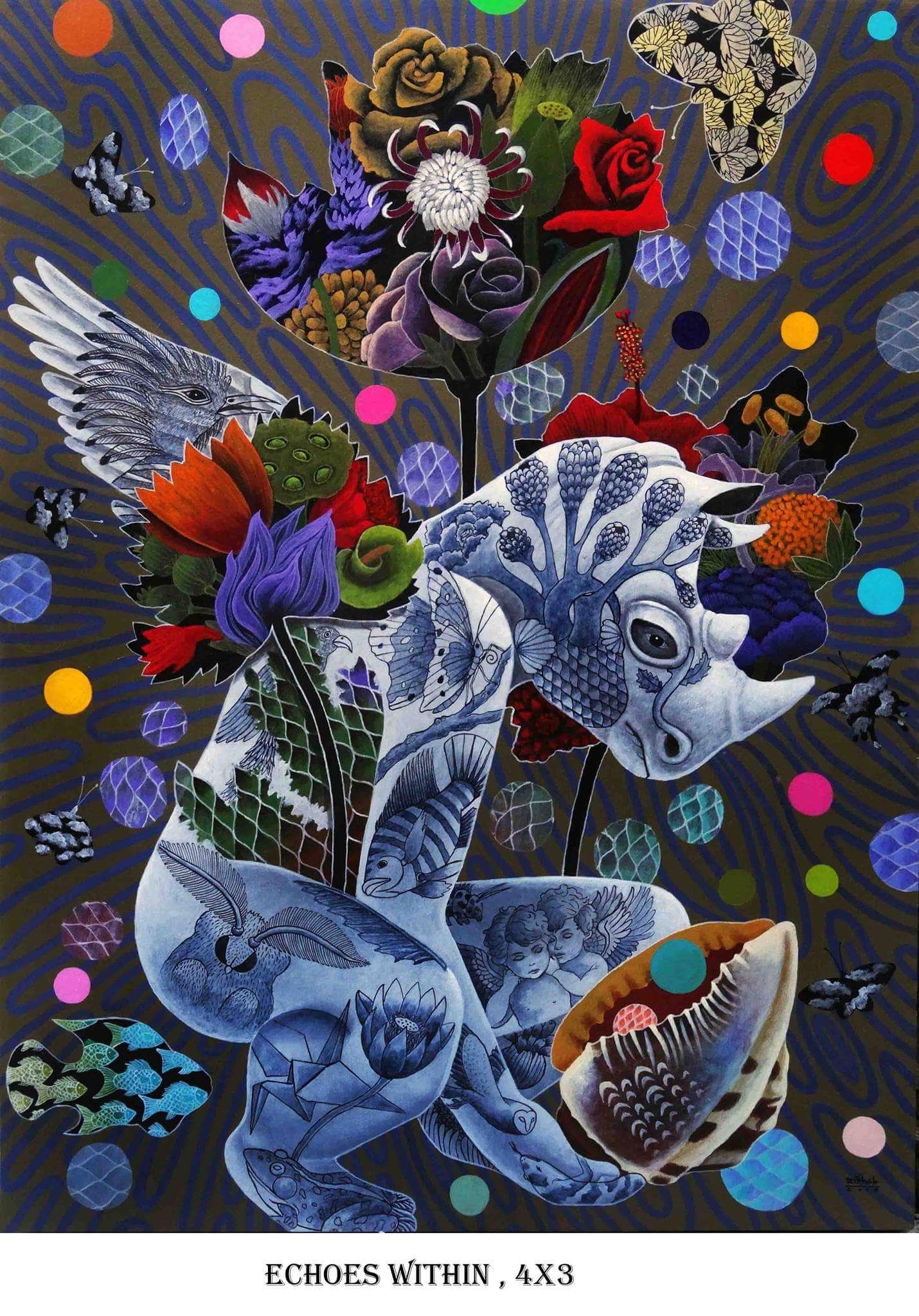 “THE WORLD is but a canvas to our imagination,” it has been said, and this is true of contemporary visual artist Roger “Rishab” Tibon.

“Fantasmagoria” features a cornucopia of “complex patterns of constantly changing colors and shapes,” as the artist describes the series of 20 pop-surrealist paintings in acrylic on canvas.

Rishab is a self-taught artist who expresses “profound admiration” for the works of Salvador Dali, Frida Kahlo and Max Ernst.

Surrealism seeks to portray or interpret the workings of the unconscious mind as manifested in dreams. It is characterized by fantastic imagery, and incongruous or unnatural juxtapositions and combinations.

But Rishab combines some influences from Pop Art, utilizing popular images and graphic technique, which owes to his background as advertising art director. Thus, he considers his recent works as “contemporary pop-surrealist paintings.”

In “War Games,” video-game characters combine with luminous jellyfish and other sea creatures, while a knight riding a gas-masked Dalmatian is ready for a joust. The canvas is filled with the exotic pageantry of fruits and flowers, butterfly forms, idealized tulips and tendrils and horns.

In another painting, a young woman’s face in half-mask is shown amid futuristic vegetation with what appears like an octopus coming out of her cleavage, her collar like a bivalve clutched by a half-man, half-rhino.

Another work features a human torso in white with different flowers as head, a bulol, her heart like a passion fruit. Inside the torso are images of horse, shells, trumpet, mini red airplane, mushrooms in a broom—in a fascinating “dream landscape.”

“My creative process is intuitively free-flowing,” said Rishab.   “Many of my works are really philosophical in nature, masked with seemingly whimsical elements.”

Rishab was born in 1960 in Aklan, where he designed T-shirts and made signboards for jeepneys as a boy. He relocated to Cebu and became an art director of Ogilvy. He later settled in Baguio, teaching at a private art school.

Rishab has exhibited in Vietnam, Singapore, Japan, Taipei, South Korea, Australia, Hongkong and the United States. He was invited to a group show honoring the Mexican artist Kahlo at Chim Maya Gallery in Los Angeles, joining 50 artists from other countries.

He won the Grand Prize in the Green Cordillera Painting Competition in 2000; First Prize in the Baguio Painting Contest in 2009; honorable mention in the AAP Annualt in 2009; finalist in Philip Morris in 2005.