Out of the mouth of babes | Inquirer Lifestyle ❮ ❯ 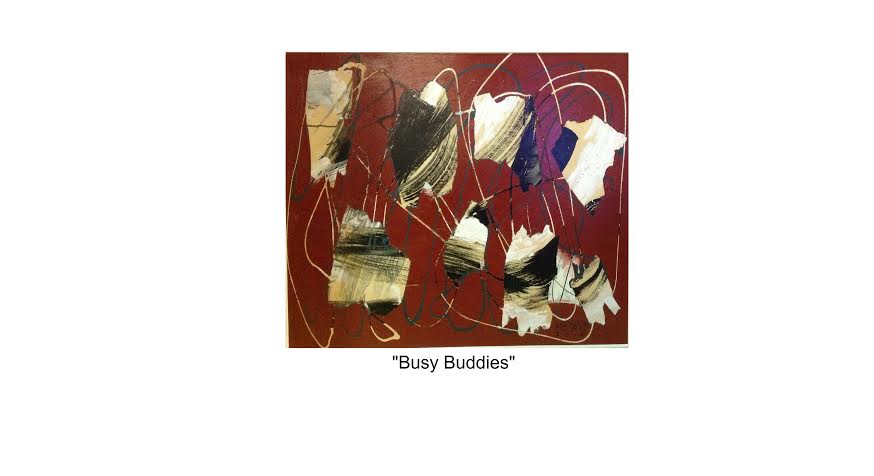 Out of the mouth of babes

WHAT business would a renowned portrait painter have to do with abstraction? No more opposite sensibility is there than these two genres whose concerns and goals are so distinctively apart, denying accommodation to each other, possessed of a temperament that is alien to the other, an incursion into another idiom that can be interpreted as an act of transgression, if not a confrontation between incompatibles.

And yet, by what quandary of fact and imagination, that several of our accomplished realistic and figurative painters have been abstractionists and, in extreme cases, have even abjured or given up representational painting for abstraction? Top of mind, of course, is the late National Artist José Joya, whose name is a byword in Philippine Abstract Expressionism, but who has produced numerous mother-and-child works, nudes and, being an inveterate globetrotter, numerous travel sketches all over Asia, Europe and America. Still another exemplar of both figuration and abstraction was the late J. Elizalde-Navarro, also posthumously declared National Artist. From the next generation, two more names crop up: Gus Albor and Edwin Wilwayco, undoubtedly competent in representation but who heroized abstraction, on which their current reputation rests.

This is enough substantive evidence to bring up another name: Gig de Pio. This artist first came to the attention of the critics in the late ’70s when, as a young Fine Arts student at the University of the Philippines, he participated in the art competitions of the time. A personal note should come up at this point, for this writer, himself recently arrived from art studies in Europe, had taken notice of De Pio’s abstract work in an AAP competition.

Though De Pio and I were never previously cognizant of each other, admittedly I had expressed an unabashed enthusiasm, but was thoroughly convinced that here was one artist who had extended and broken through the standard of excellence, a veritable barrier set up by that colossus of Philippine abstraction, name of José Joya.

In short, in the person of De Pio was one artist who understandably and forgivably could have been so impressionable and thus so cowed into imitative submission.

Our admiration for De Pio’s youthful abstraction was even more justified when, years later, we were to find out that he was then … a José Joya scholar!

In fact, De Pio was a beneficiary of another scholarship: the other was an earlier one, a Juan Ponce Enrile (JPE) scholarship.

De Pio would later share the story that JPE, then secretary of national defense, had accompanied the justices of the Supreme Court to Cebu, where De Pio hails from. In that auspicious event in Talisay, De Pio, then still in high school, was asked to do the sketches of the justices, who not surprisingly were duly impressed by the young Cebuano’s prowess in portraiture.

In the succeeding decades, Gig de Pio devotedly committed himself almost exclusively to portrait commissions, such was the demand for his works, so infused with an otherworldly soft-focus realism that the great ladies of our society could only but swoon with delight at their amazing transformation on canvas. (For De Pio’s style of portraiture, I must coin the word “etherealism.”)

Would these same grande dames marvel at his latest abstract works now on view at the Crucible Gallery? And would it matter at all if De Pio’s abstraction is not quite their TWG cup of tea?

For surely, abstraction is something which De Pio owes to himself, an engagement which ignores the blandishments of an art market constantly demanding floral still lifes, sentimental mother-and-child theme, and exquisitely fleshed out nudes.

But for now: Deal with it. Not only does De Pio proffer these new abstract works, he has also invested them with a heavyweight theme and a purportedly academic title: Entropy/Gestalt. That should instantly send everyone rushing to the nearest dictionary, but we will save you that harried trip. While entropy has various connotations, it will suffice, for accessibility, the not far-fetched definition of “inevitable and steady deterioration of a system or society.”

Gestalt, on the other hand, is “an organized whole that is perceived as more than the sum of its parts.” These are deliberately willed into De Pio’s works, perceptible in the title’s delineating binary issues of “chaos/order, creationist/revolutionist, religion/science” and the climactic line, “That the Big Bang was indeed ‘Let there be light.’”

Intriguingly, that startling insight was serendipitously found: A kid of 7, a grandson of De Pio’s friend in whose Christmas export workshop the artist conducts art lessons, innocently blurted out the Biblical line of creation, this upon merely hearing the onomatopoeic words “Big Bang.” And, lo, such was the luminous light cast upon an otherwise confounding scientific theory of creation. Indeed, out of the mouth of babes…

Even Einstein was humbled by this realization. In his words: “Everyone who is seriously involved in the pursuit of science becomes convinced that a Spirit is manifest in the laws of the universe—a Spirit vastly superior to that of man, and one in the face of which we with our modest powers must feel humble.”

One must ask: From whence comes De Pio’s intellectual and conceptual inclination, being so steeped in Joya’s gestural abstractionism?

Not so surprising when one learns that aside from Joya, De Pio also came under the tutelage of both the late Bobby Chabet and Dr. Rod Paras-Perez, penetrating thinkers into the nature of art.

Already gifted with a natural, God-given talent in draftsmanship, De Pio was aware of the need in himself to learn about art theory and history. Now his mind can guide his hand.

Though De Pio is not asked to disavow the art of portraiture, it is only by the strength of his conviction that abstraction must remain an essential impetus in his artistic consciousness. Make no mistake: His current show Entropy/Gestalt responds to a force greater than Gig de Pio’s unquestioned skill in portraiture, beyond the activity of paint itself, into a space of abstraction that hurls us back into the nether region, indeed, into the heart of the ether…