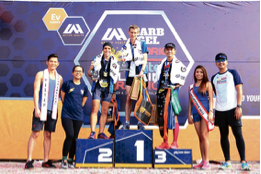 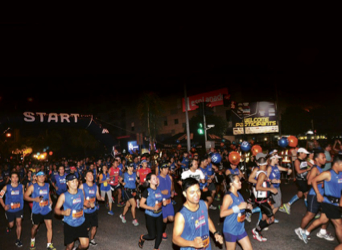 The 2015 RUPM pacers and runners were given first dibs to respectively sample and purchase the new ActiveHealth CarbGel, which was launched during the race as title sponsor of the event “RUPM participants were able to experience for themselves the ‘start strong, finish strong’ advantage provided by the new ActiveHealth Carbgel,” said Lester Castillo, Sports and PR executive of ActiveHealth. It is an energy gel packed with a specialized combination of quickacting and long-burning carbs, to help runners and other athletes sustain their energy during their training or race. A sachet of ActiveHealth Carbgel is best taken 15 minutes before training or race and another one for every hour of activity to help sustain energy and performance.

“We are sure that the runners benefited from the quick-acting and long-burning carbs supplied by ActiveHealth CarbGel. Depending on the intensity of their pace, a full-marathon runner will ideally consume five to six sachets of the carb gel,” said Marco Danga, Senior Product Manager of ActiveHealth. The ActiveHealth CarbGel now completes the ActiveHealth nutrition system composed of Enervon Activ: a supplement taken daily to help build stamina and immunity, ActiveHealth CarbGel: ensuring sustained energy from start to finish, and Enervon HP: the ideal recovery drink best taken 45 minutes after workout.

The race attracted all types of runners, from newbie to progressive ones. Regulars like Arlene and Alejandro Cortez were all praises for the very well organized RUPM as well as the exclusive red- carpet finish for the 42K runners. The couple finished the marathon, side by side. It was the first for 52-year-old Alejandro and the second for 46-year-old Arlene. Both of them are regular Run United participants since 2012.”We always join Run United races. This year, in fact, we ran in all three races.We were able to collect and complete all the three finisher medals.We will sign up again next year,” said Arlene.

2015 RUPM was made possible through the support of Enervon Activ, Enervon HP, Alaxan FR, Gatorade, Premier, One Esplanade, and Philippine Daily Inquirer, the official media partner of RUPM. The final race of ActiveHealth for 2015, Run United Recovery Run, will take place on December 12 at Filinvest, Alabang. ActiveHealth (AH) is a total integrated solutions provider that empowers progressive athletes to perform better and achieve their goals.