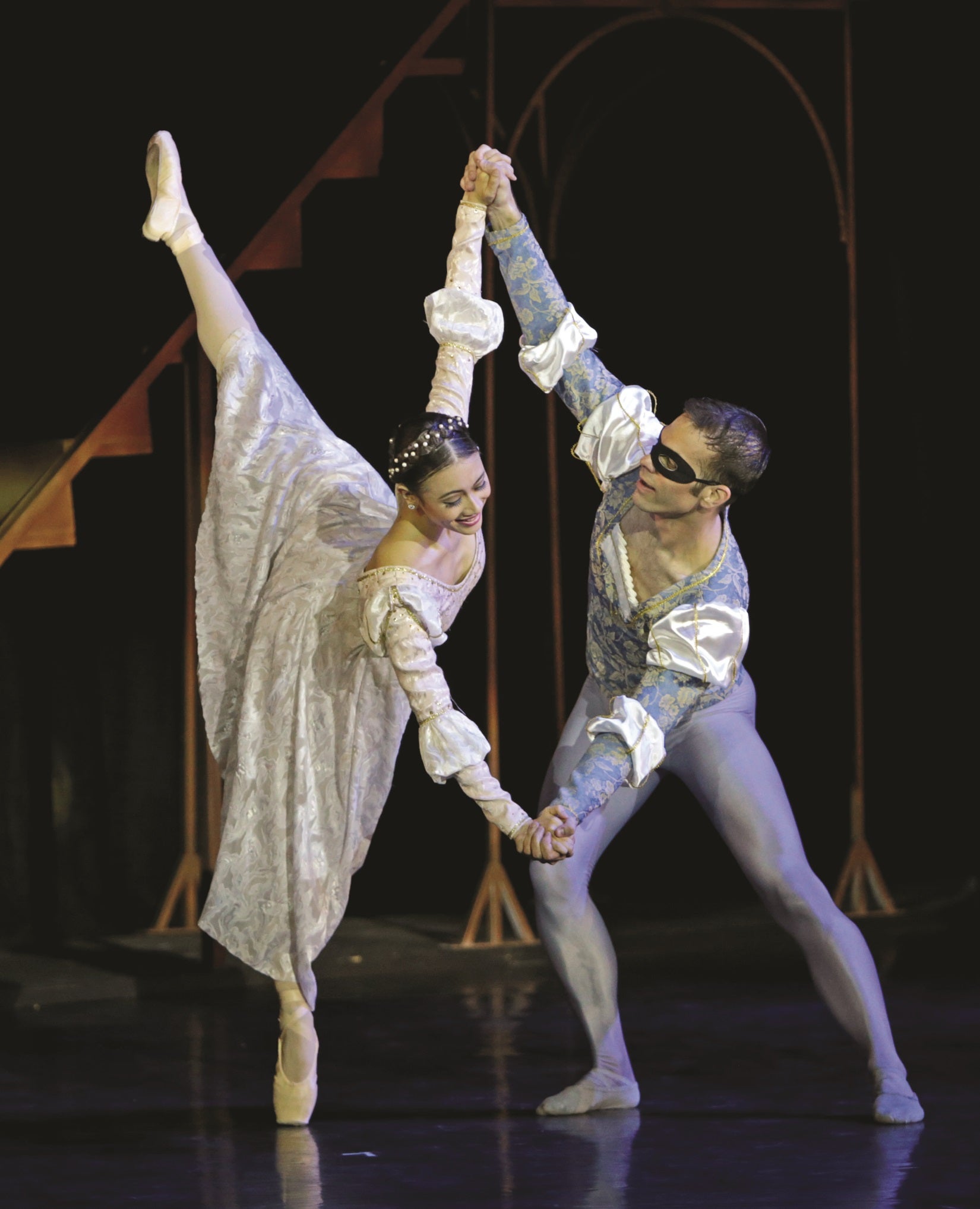 ROMEO and Juliet (Brian Williamson and Abigail Oliveiro) meet for the first time in the ball scene. PHOTOS BY KIMBERLY DELA CRUZ

Unsurpassed in classical technique and precision corps de ballet in this country, Ballet Manila (BM) pushed the envelope with “Romeo and Juliet,” which tested a dancer’s acting chops.

Contemporary interpretations of the production contain all the elements of a Hollywood movie—sex, violence, a bit of “Cougar Town” and a host of complex characters.

In BM’s rendering by Paul Vasterling, artistic director and chief executive officer of Nashville Ballet, the choreographer edited the roles that are unimportant to the plot. Instead of harlots flirting with Romeo and his sidekicks Mercutio and Benvolio, there’s only a Gypsy, performed with sensual abandon by the ravishing Dawna Mangahas.

The gaggle of street acrobats was trimmed down to a carnival king by human dynamo Anselmo Dictado.

The choreographer also pulled in little surprises. Unlike the polite courtly dance in the Capulet Ball, this dramatic version injected contemporary lunges and deep back bends, and Oriental arm arcs.

The liaison between Lady Capulet and her nephew Tybalt was emphasized to make way for an emotional end to Act 2.

In the balcony scene, Romeo couldn’t contain himself that he kissed Juliet several times and stroked her body. After a duel with Tybalt, a seriously injured Mercutio plunged to his death.

The dance community and social media gushed over the first cast led by Katherine Barkman and Rudy de Dios. This batch was the feather on BM’s cap.

Being very generous, BM set up a second and third cast to give other dancers the chance to shine.

We caught the second cast: BM’s imports Abigail Oliveiro, a Singaporean-Australian; and  Brian Williamson, an American, making their debut.

As individual artists, they are gifted with good looks and instincts.

Oliveiro meted out a Juliet of  innocence, vulnerability and technical polish, but there was inconsistency in her acting. She was gorgeous in everything except the love scenes.

Behaving like a sugar-crazed, hyperactive child in Act 1, she was convincing. In the essential balcony scene, however, there was little of Oliveiro that evoked an awakening to womanhood. Then again, in the bedroom scene, she played it too safe that she lacked the ardor and urgency to keep her bare-chested Romeo by her side.

She finally abandoned her reserve in the final act, rebelling against her parent’s wishes to marry Paris and unrestraining herself in the death scene.

Williamson was a lightweight Romeo, although he performed with commitment. He would be more effective if his dancing had more breath, and if he worked with more seasoned partners.

Some elements were amiss in the balcony scene—coordinated lifts, artistic maturity and rapport. It would take several performances and rehearsals before this pair could make the difficult lifts look seamless and convince us that they are comfortable with each other.

Still, their pas de deux had some good moments in Juliet’s bedroom. Williamson lit up Oliveiro’s exquisite lines with occasional deft handling, and when he twirled her above the floor very effortlessly, the audience clapped.

The supporting cast was of mixed quality. Both short on muscle power, Elpidio Magat as Mercutio and Rudolph Capongcol looked like little boys beside an adult, the husky Williamson.

Magat didn’t have the personality to bring out the scorn and tragedy of Mercutio. In contrast, the nimble Capongcol as Benvolio thrilled the crowd with his bravura dancing.

The swordplay between the fractious Montague and Capulet camps was more of a choreographed routine than a killing sport. The duel between Williamson’s Romeo and Andrade’s Tybalt was tentative, lacking the attack and parrying lashes that would have ended in homicide. Hence, the crowd didn’t seem engaged in the street fights.

Nonoy Froilan and Lisa Macuja-Elizalde appeared as the domineering Lord and Lady Capulet, respectively. They had commanding presence.

Even if Vasterling’s approach was naturalistic, Froilan’s  declamatory gestures worked for his character. Pushing 65, he was still the ever-reliable partner. He lifted the tall Oliveiro as if she were cotton.

Elizalde chucked in the short tutu, pointe shoes and bravura dancing for high heels, long, heavy skirts and character acting, all of which, by the way, posed their own challenges.

Next to these grown-ups, Mark Sumaylo was a scene stealer as the gallant and magnetic Paris.

BM’s strength in numbers made up for the uneven performances of the main cast. The crowd scenes in the marketplace and Capulet Ball were vibrant.

Guest conductor Alexander Vikulov interpreted Prokofiev’s score with brilliance and consistency that the Manila Symphony Orchestra was in world-class form.

The costumes of the main characters, provided by the Singapore Dance Theatre, added to the richness of the production design. The trompe l’oeil with peekaboo cutouts framed dancers. The stylized sets, though very under lit, served the choreography’s purpose.

The only eyesores were the uncoordinated curtains and linens in Juliet’s room.

At the end of the show, the audience raved at Vasterling’s production—a sure-fire hit.