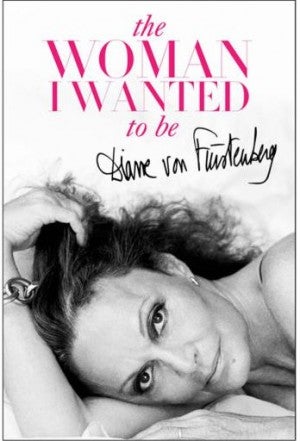 You can tell a lot about a person just by his or her name—especially in the world of fashion. This is the case with designer Diane von Furstenberg. Let’s begin with her flowing, balanced signature. The “D” flares out before returning. The “F” stands tall, followed by the “g” digging deep. This is the case with her initials, DVF.

“Over the years, those three letters had become so familiar that even my family calls me DVF now,” Von Furstenberg writes in her new memoir, “The Woman I Wanted to Be” from Simon & Schuster.

Von Furstenberg’s previous book, 1998’s “Diane: A Signature Life” focused on the business side of her story. “The Woman I Wanted to Be” clearly attempts a more complete and personal account of her life. The book is divided into two sections, the first titled “The Woman I Am.”

Here, Von Furstenberg—born Diane Simone Michelle Halfin in Brussels—recalls her life from childhood to adulthood in her own candid way, dropping some quotable quotes along the way: “Love is life is love is life. There is no way to envision life without love, and at this point in my life, I don’t think there is anything more important.”

She of course talks about her romances—the first boy she kissed was an Italian named Vanni in Milan—and then about her marriages, first to German aristocrat Prince Egon von Furstenberg in 1969 and then to American businessman Barry Diller in 2001.

“The ultimate breakthrough came when I saw Julie Nixon Eisenhower wearing the wrap top and skirt on TV speaking in defense of her father, President Richard Nixon, during the Watergate scandal. ‘Why not combine the top and the skirt into a dress,’ I mused. And the concept for the wrap dress was born.” That was in 1974. “Forty years later, the dress is still alive.” Not for nothing is an exemplar of that dress found in the Metropolitan Museum of Art.

Interestingly enough, Von Furstenberg infuses “The Business of Fashion” with commitment and memory. She talks about the spread of her fashion empire with an emphasis on what it meant to her—something that was even more bracing when she suffered some business failures.

This period of second-guessing herself strikes the reader as surprisingly affecting, because Von Furstenberg is clearly never mercenary about her brand: “Not only had I lost my brand, I felt I had lost my identity. I had not realized how much my sense of self had been linked to my work.” She took it personally, and that led to what she calls the New Era.

Learning from her mistakes and essentially going back to the basics, Von Furstenberg reinvents herself and her company DVF into a cutting-edge fashion entity for the new millennium. She changes her own game: “My goals had shifted. No longer was I striving to be financially independent… What I wanted now was to turn a good company into a great company, to leave a legacy, something that would live beyond me.”

That’s how Von Furstenberg wound up as something more than a fashion executive; she’s now a philanthropist (the Diller-Von Furstenberg Family Foundation) and a reality TV star (E!’s “House of DVF”).

“The Woman I Wanted to Be” is honest and engaging, with enough details to satisfy the most rabid fashion fan. Where the book succeeds the most is how its two halves combine into a solid, fascinating take on a woman who, against all odds, set out to make a real name for herself. “The Woman I Wanted to Be” proves that, in this aspect, Diane von Furstenberg has been a resounding success.