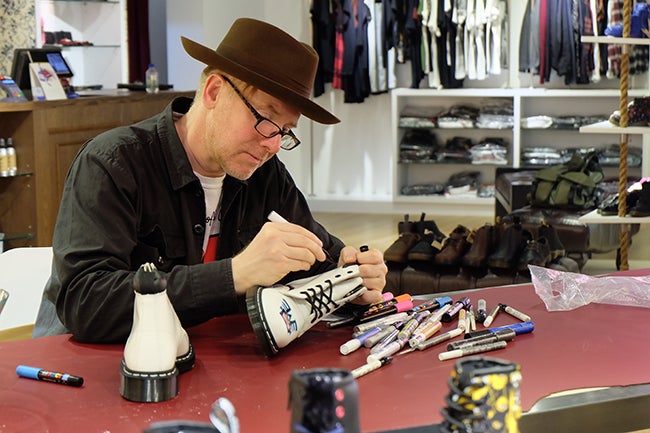 CUSTOMIZING a pair of Dr. Martens

For many people, the 1980s London and New York club scenes sound like a dream. But for English artist Mark Wigan, it’s a memory.

“The ’80s club scene was a lot smaller… before it became a commercial industry,” he told Inquirer Super early one morning at Dr. Martens’ flagship store in Capitol Piazza, Singapore. “It was quite underground… a melting pot of artists, musicians, fashion designers, people in creative media, magazines. It was a very interesting kind of cultural mix… You’d have a portfolio of printed artwork which you’d take with you to different places to show people.”

A pioneer of urban art, Wigan’s four-story mural at the Limelight Club in London’s West End caught the eye of Andy Warhol in 1985. “He described it as ‘hot,’” Wigan recalled. “And then he spoke to the club’s owner, Peter Gatien, who was from New York, and suggested that I paint the Limelight Club in New York.”

Soon, Wigan was in New York to do that and more. “Andy introduced me to Keith Haring,” he said. “I visited Keith in his studio, and we exchanged T-shirts with our designs on them. I got some originals from Keith. It was great. He gave me a collection of badges and some little toys that he had collected. And we had an exhibition launch at the Limelight. It was very good of Andy to introduce me to people like Keith.”

Wigan spent years using Polaroids to document club scenes across the globe as a roving reporter for i-D magazine where he also worked as an illustrator. “I went on an i-D magazine world tour,” he said. “I went to cities like Vienna and Tokyo where I was photographing DJs, fashion designers, people hanging out in clubs with interesting street fashion… It’s an archive of people in London, New York and Tokyo.”

His collaboration with Dr. Martens, which will be available at its store in Two Parkade, Bonifacio Global City today, Oct. 16, is a celebration of his life’s work. “It’s a mixture of the very colorful work which is inspired by the city at night with lots of neon and imaginary characters that draw inspiration from music and nightclubs,” he explained. “Then there’s the black-and- white drawings…”

For Wigan, who has been wearing Dr. Martens since the ’70s, saying yes to the partnership was an easy decision.

“I think there’s a synergy between the Dr. Martens brand and my artwork and documentation of subcultures,” he said. “And I’ve always worn Dr. Martens, I’ve always liked the brand. Most of the time I really am wearing it anyway so it was a really good match.”

He remembers his first pair: “It was an oxblood Dr. Martens boots but I think my favorite are the loafers. I’ve always worn the loafers and brogues as well…”

He worked closely with Dr. Martens’ creative director and artists in choosing which of his works will be featured in the collection.

“It was very collaborative, really,” he said. “They really appreciated the work and was sympathetic to the way they incorporated the 2D artwork into three dimension.”

The design of Kaboom, one of our favorites from the collection, was from an acrylic painting Mark did in 1999.

And if you look closely at the Party People design, you will spot familiar faces that Mark has drawn. “There are actual characters I’ve observed in nightclubs,” he said, “people like Steve Strange, Lee Bowery, who’s a performance artist, Vivienne Westwood and Andy Warhol.”

Although Wigan’s work became wildly popular in Japan where his art was used on everything from clothing to linens, it’s his first time to see his art on shoes.

He has spent the past weeks touring Dr. Martens stores across Asia, doing live paintings on walls and windows and meeting fans and customizing their shoes.

His adventure has continued since our conversation in Singapore, making stops in Vancouver, Seattle and Paris.

We see you wearing the Kaboom boots a lot on Instagram. But do you plan on wearing all the pairs?

Yeah, I will be wearing all of them. I’m gonna be wearing them a long time, I’ve got a sample of each one.

How has it been spending the past few weeks in Asia?

I’ve had a really great time, people have been so friendly and I think because people really appreciate the artwork, it’s made me put a lot of effort into the live painting and customizing people’s shoes, I got to customize lots of shoes for people on this trip so it’s been really good fun.

You write books about illustration, you teach art—why is that important to you?

When I’m creating my artwork, I’m very kind of into my own world. When I’m teaching, I’m basically encouraging other people to be creative. For me it’s an important part of what I do—it’s important to be a creative person but also to encourage others to be creative. I always encourage students to follow their own path, to be aware of fashion but not to imitate fashion and to incorporate their own interests into their work, so their work becomes unique.

Can you tell us a little about the Museum of Club Culture?

We set it up about six years ago and it’s all about celebrating the nightclub culture since the 1920s to the present day. It’s club culture and associated music and fashion. We have exhibitions of photography and video, guest exhibitions and we have a huge collection of memorabilia. I’ve collected lots of club flyers, posters, photography, created lots of music graphics and club flyers myself… It’s unique, it’s the world’s only museum of club culture.

You do different kinds of art—photography, sketching, graphics… Do you have a favorite form or do they all meld?

Everything stems from drawing. The paintings are really kind of based on drawings as well.

When did you first discover your passion for art?

I’ve been a compulsive drawer since the age of three. (Laughs) I used to do lots and lots of drawings on rolls of wallpaper paper. I used to do panoramas when I was a child. That led on to art school… and then becoming an illustrator for magazines like i-D and NME and doing murals in nightclubs and putting my designs onto lots of different products.

The history of art, significant figures from history… artists like Matisse and Picasso in terms of their use of color and line. Artists like George Grosz who was working in Berlin in the 1920s. His work was social commentary and satire. Those kinds of artists, also illustrators who used to illustrate for The New Yorker over the years in the 1940s and 50s. I like humorous satirical illustrations as well… There are other things. Anthropology, the art of civilizations around the world, Aztec artwork, Celtic or Asian folk art as well. I like to look at motifs that repeat in different civilizations. The other inspiration is music. I paint to music.

What’s the best thing someone has said about your art?

People have said things like Mark Wigan is the Toulouse-Lautrec of London in the way that Toulouse-Lautrec was recording what was going on. Someone said that my artwork symbolizes a whole kind of professorial work on youth culture and subcultures. I draw from memory and the imagination so I think I have an eye for detail.

The shoes people are wearing, the designs on their T-shirts, their haircuts, their jewelry, it’s almost photographic, I observe quite a bit details, then later I can incorporate them into the artwork.

How does it feel to have people wearing your artwork?

It’s great, really. It’s a wearable art canvas in a way, it’s like taking art onto the streets as opposed to just being in a gallery. I started doing T-shirts initially as well and the idea of people walking around with T-shirts with your artwork on it is great advertising.

What do you stand for?

I stand for the power of the imagination. And, like I said in the video, drawing inspiration from music as well.