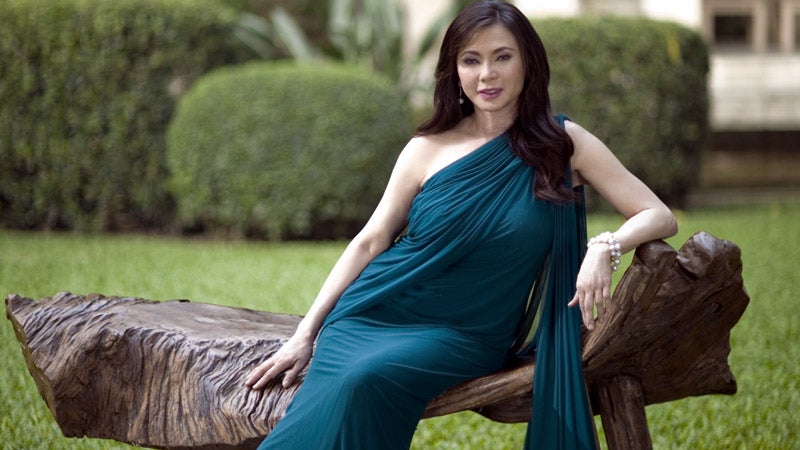 Dr. Maria Victoria “Vicki” Gonzales Belo ex Henares soon-to-be Kho drags herself into the spacious living room of her Ramon Antonio-designed house 15 minutes ahead of the scheduled pictorial-interview. She looks tired and her eyes show it. The lids droop with her left eye effectively becoming smaller, a congenital facial asymmetry that the country’s queen of cosmetic makeover could not undo. But her handshake is energetic. I’m good, her handshake says.

Warm yet businesslike, her house exudes the same self-assured air. Sliding glass doors open to the lanai. Palms and bamboo shrubs abound to calm the nerves. BenCab, Anita Magsaysay-Ho and Malang paintings adorn the walls. Four framed pictures of a young Quark and Cristalle Henares atop a console attest to the fact that this was once the family home of ex-couple Atom Henares and Vicki Belo.

Upstairs, Vicki asks the Philippine Daily Inquirer to join her in her private beauty parlor. It’s not for vanity, but for practical reasons, she says. Beauty is her business, and she lives it. It’s cheaper to have her own beauty parlor than go to one every time she leaves the house. She’s been up very early, around 7 a.m., to sit as judge in this TV reality show.

Maricar, who handles admin in the Belo Medical Group, was on hand to brief Vicki on her schedules and assorted office matters.  And so, while Marife, her make-up artist of eight years, fixes Vicki’s eyelashes and a hairstylist attaches hair extenders, the Doctor to the Stars keeps track of her travel booking and overseas appointments in Atlanta, Australia and wherever.

All in the pursuit of beauty, she says.  As a child, she recalls being obsessed with bad skin and obesity. “At five, I weighed 100 pounds,” she says. “My father took away my rice. I used to cry because I was not allowed to eat.”

To lose weight, Vicki played pelota and was introduced to the gym. At 11, she started to lose weight. She also started to notice boys.  “Since then, I have always been in pursuit of not being fat,” she says. “But I also had bad skin. I had wall to wall pimples and my father spent a fortune on dermatologists.” Her face was scrubbed and scraped and treated in various ways. “It was painful,” she recalls.

Meanwhile, the battle against the bulge hounded her even in pregnancy. “I gained 50 pounds while pimples sat on my face. It took me a year to lose all that weight,” she says. Today, she monitors her weight down to the last ounce. Adjacent to her private parlor is a water and shower closet and a weighing scale. On the wall is a calendar with each day marked by her corresponding weight: 127.7 on Monday, 127.9 on Tuesday… and so forth. 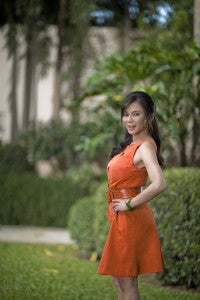 But childhood memories can be tricky. What Vicki remembers with pain and revulsion hardly mattered to Lianne Bautista, her classmate in grade school at the Assumption College. “We were just children, you know. I didn’t realize it was devastating for her. But she was cute, very cute. She had very nice hair,” Bautista recalls.

But there was one thing peculiar with Vicki then, her classmate reveals. “She hated being photographed. When we had class pictures, Vicki would make excuses for us to go somewhere to hide. So there are some class pictures where we were both absent,” Bautista says.

Even as a teen, Bautista says, Vicki was “reserved” compared with other classmates. “She was not into boys like most of us were. We were flirty-flirty, she was not,” she says with a giggle.

Asked what Vicki, the godmother of her youngest child, fears most, Bautista says: “I think it’s still fear of being abandoned.”

“AMPON” (adopted) was a term reportedly hurled at Vicki as a child. According to an article by Larry Henares, her ex-father-in-law, Vicki was traumatized when she learned that she was adopted by lawyer Enrique Belo and his wife Nena Gonzales. According to Henares, Vicki was one of the nine children of Nena’s sister Conchita who was married to Agustin “Toy” Cancio. Separated from her eight siblings, Vicki was raised and doted on by the Belos as an only child. According to some sources, the nuns at the Assumption had at one time asked Vicki to join her biological siblings in their car because they were her real family. Vicki was reportedly “rescued” by the timely arrival of her adoptive dad, Attorney Belo.  In his article, Henares describes his ex-daughter-in-law as a “poor little rich girl” with a “troubled soul.”

But Vicki has nothing but fond memories of the older Henares. She even keeps a copy of “Make My Day,” a compilation of Henares’ essays, by her bedside table. “I really like the (Henares) family. Interesting, very intelligent discussions and the English so malalim (deep), the debate intense but no hard feelings,” she recalls.

There are no hard feelings with her biological family either, says Vicki.  She denies talk that they have caused her the pain which reportedly fuels her unending search for fulfillment. “Wala ’yung tampu-tampuhan (there was no grudge, no ill will),” she says.  Early on, she adds, her biological siblings were told about the situation that led to her being adopted and they’ve treated her like the real sister that she is. 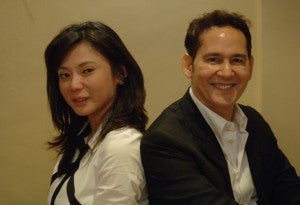 But she volunteers very little information about them, except to say matter-of-factly: “I belong to the Cancios of the Philippine School of Interior Design.” Her Cancio nephews and nieces do come to her clinic for some procedures, she says, and adds that she also has Sunday lunches with the Henareses and the Cancios unless she’s out of the country.

Whether spurred on by inner pain or just plain business acumen, Vicki deserves credit for popularizing liposuction and changing the landscape of the beauty industry in the country. She admits that her own personal experience with bad skin helped, but adds that Somebody Up There obviously likes her.

In fact, she says, she has been practicing dermatology and cosmetic surgery since the early ’80s, but the subject was then considered “sub-rosa,” (literally, under the rose, or secret), especially breast enhancement, facelifts, nose jobs and even the removal of eye bags.  Nobody wanted to admit having any work done to improve on nature; it was an admission of imperfection and one risked being regarded as being too vacuous and too vain. It was thus a source of stigma and shame.

Among Vicki’s first patients was Regine Velasquez, who was then being managed by her then brother-in-law Ronnie Henares. Regine, says Vicki, was getting treatment for pimples on her back. In her TV appearances, Regine would make it a point to thank her. It worked like an endorsement. “I noticed that other celebrities were coming to me for consultation. Apparently, Regine had told them to,” says Vicki.

But it was not until actress Rosanna Roces raised her blouse on television to show off her scars a day after she had a liposuction in 2003 that the public took note of other procedures available for losing weight other than diet and exercise.

Actually, liposuction has been around since the 1960s. But Vicki, in 1990, introduced the dermatology lipo, an out-patient procedure called tumescent lipo which does not require surgery. “Rosanna was really a turning point because after that, lipo was out in the open. And Osang was not even an ex-deal, she was a paying patient. But being Osang, being candid and all, parang wow, you know, it was a moment. After that, lipo became a normal procedure,” says Vicki.

Still, Vicki says she did not anticipate the public reaction and how it would impact on her clinic. For one, it attracted a clientele that was totally unexpected. “There was a belief that only rich people can have lipo, but things have changed.”  Her biggest clientele, she says, were the so-called Japayukis. “And they brought their families,” she adds.

Asked if she has not, inadvertently, fostered a culture of crass materialism based on looks, Vicki is quick on the defense. “Beauty is not skin deep. A millimeter scar on the face is a kilometer scar in the heart. How many people go through therapy because of a bad skin or a flat nose? I’ve seen people regain their self-confidence after a nose job or a skin treatment, and they feel so much better. It’s not just the money anymore,” she says.

Friends of Vicki say they really want to see her become, in her own words, a “decent woman,” that is, settled in marital bliss, most likely with Hayden Kho, her boyfriend/lover/boytoy of six years. Some months ago, the couple announced their engagement. And Kho even talked of a prenup agreeement.

“It’s his idea,” says Vicki. “He knows it’s a sticky issue and it’s going to crop up every now and then, that he’s after my money. So he wants to make it clear that he doesn’t want any of it. And that he better deal with it now.”

The prenup aside, Vicki says they are “working on the relationship on the spiritual plane. We are praying, in fact,” she adds.  Except for that, there are no details yet, not even a date. “We have talked about it, but nothing definite yet. I’m concentrating on my spiritual life. And I’m trying to stop shopping.”

Being linked to a much younger guy who’s been publicly flogged for those sex videos with different women has given rise to risqué talk that his fiancée might be, er, addicted to sex.

Vicki doesn’t blink on this one. “Me, addicted to sex? Duh… I’ve discussed this with Hayden, that maybe he should marry someone younger… you know, I’m in the twilight, and he’s just starting. I want him to have children. But I don’t want to let him go. So we’re working on the friendship. If ever we split up, who would be my best friend?”

But lest you think she’s above this earthy concern, Vicki admits to trying on one of her latest procedure that acts like a vaginal magnet. Aptly called Vagnet in her company-sponsored online name-it contest, the medical procedure tightens vaginal walls.  “Feeling like a virgin,” she says with a giggle of the novel procedure.  The admission proves once more her claim that she tries on herself all the products and procedures offered in her clinic before offering them to the public.

Just how extensive this claim is might be open to debate. A quick glance around her shower closet and beauty parlor shows not one Belo product—no soap, no whitening lotion. Or maybe she doesn’t need them?

Vicki introduces herself as 54 years old, but she looks younger in person. Various articles, however, says she was born either on January 25, 1953 or January 25, 1955, which would make her either 58 or 55 years old.

But if she can do wonders to one’s skin and make people look younger by 10 years, what difference would it really make if she’s 54 or 58 years old? In fact, Vicki says she doesn’t mind growing old—except that she doesn’t want to feel old. Or look old.

Well, who does?  And thankfully, Vicki sees to it that most people don’t. Viva Vicki!