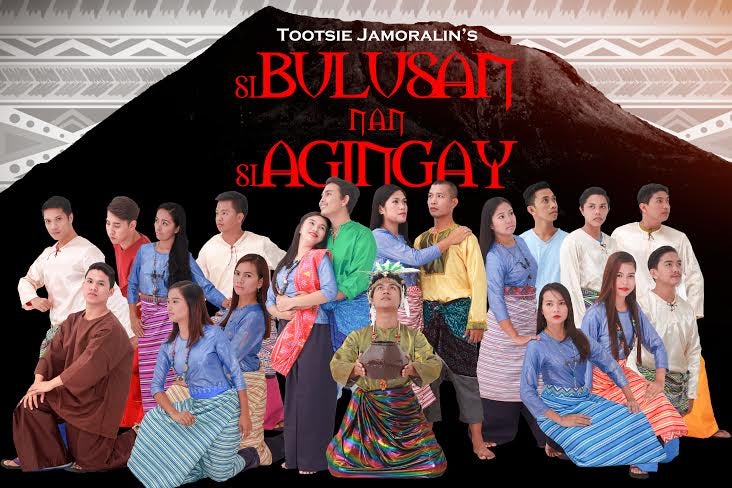 The original play “Si Bulusan nan Si Agingay,” based on the folk story about the origins of the volcano lakes Bulusan and Agingay in Sorsogon, will be staged at Abelardo Hall, University of the Philippines, Diliman, Quezon City, on Oct. 23, 6 p.m.

The play was written by the late founding president of the Sorsogon Arts Council (SAC), Reynaldo “Tootsie” Jamoralin, and is directed by Dan Razo. The 40-plus ensemble, including the production staff, is composed of Sorsogon’s local artists, mostly members of SAC and its theater arts arm, the Sorsogon Community Based Theater Group (SCBTG).

Razo, who trained with the Cultural Center of the Philippines, mounted the play’s original run 21 years ago, in October 1994 in Sorsogon. Another leading Bicolano theater artist, professor Julio Mendoza of Bicol University, returns as choreographer. The playwright’s widow, Ella Gajo-Jamoralin, serves the project supervisor.

“Proceeds from the show will become the seed money to put up a culture and arts center in Sorsogon to provide a venue for local artists and advance cultural and artistic endeavors and initiatives,” she says.

Before the performance at the UP Diliman, the play will have a two-day run at the Audio Visual Hall of the Sorsogon State College in Sorsogon City on Oct. 14-15, 3 p.m. and 6 p.m., as a pre-festival event for the annual Kasanggayahan Festival of Sorsogon province.

The play is produced by the Salvador H. Escudero III Foundation Inc. in partnership with SAC and SCBTG.

Bulusan Volcano, one of the most active volcanoes in the Philippines, is a storied part of the landscape, history and culture of the province of Sorsogon. It remains under Alert Level 1 status, its latest series of phreatic explosions having occurred just last May.