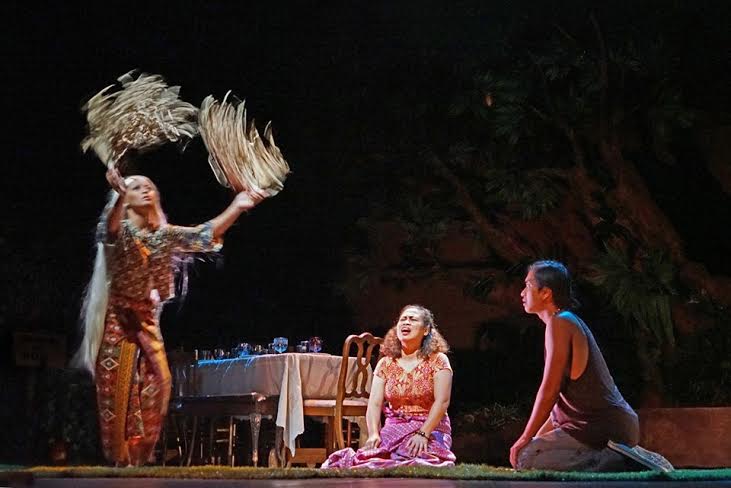 With some production designers and theater directors now wont to dress up the bare stage with increasingly glitzy, flashy elements more commonly found in film or TV, listening to the spoken word and using it as a platform to exercise your imagination becomes a rare but pleasurable luxury.

This is what filmmaker, playwright and debuting stage director Kakanan-Balintagos and his terrific ensemble offer in Tanghalang Pilipino’s production of his “Mga Buhay na Apoy,” an elegiac, lyrical and profoundly moving ode to rediscovering one’s cultural roots. That act of rediscovery becomes a balm of healing that mends broken hearts, crushed spirits and even strained family ties.

That is a lot of ground to cover, considering that the story seemingly revolves around a melodramatic setup: a dichotomized modern Filipino family, with an absentee father who is talked about but never seen, and the matriarch Leda (Irma Adlawan-Marasigan in a moving performance) holding court over a clan that has seen better days.

The coffers are running dry,  the huge mansion and its equally grand garden have gone to seed, and the only son Aran (Russell Legaspi) is lost in his private world as an artist who would rather recreate myths on canvas than work—or interact with his mother. Daughter Aurora (Karen Gaerlan), meanwhile, is reluctantly returning after years of her own estrangement with her mother.

Complicating things further, there seems to be an invisible war between Leda’s recent conversion to the Catholic Charismatic movement and her siblings’ allegiance to the ancient beliefs and practices of their ancestors in their native Palawan. Leda’s family appears to be keepers of a dying flame, and they have to find a worthy heir who will learn, value and live out the chants, prayers and traditions that represent the  soul of their ancestry.

As expected, there is a lot of bitter back and forth in a family scenario like this. But the beauty in Balintagos’ work lies in preventing acrimony from taking over the proceedings. There is always an underlying sense of redemption in every argument.  Genuine love and concern act as natural restraints to all-consuming anger. Pain is always present, but every major character on stage finds the means and the space to find healing for his or her soul.

Throughout the play, Balintagos has his cast reenact and relive the lost mysticism at the heart of their familial roots. He also has them take turns narrating the legends and myths of their native Palawan. Dance and oral tradition transpire on stage, woven into the modern setting, and they combine to enrapt the audience into listening and imagining the tales of wonder that are being played out before them.

In those little scenes that emerge gently through the greater and darker conflict of family dissonance, the lost art of storytelling is hauntingly played out. It happens between parent and child, sibling and sibling, and, ultimately, with the fourth wall gently torn down, the performers on stage and the audience watching them.

Paulo Alcazaren’s magnificent production design, held together by a giant, perpetually green tree that looms over the stage, adds to the lure of the storytelling and deepens the sense of enchantment. By the second act, the unveiling of dark family secrets makes one wonder how this family would eventually hold up. On top of the surface cultural dissonance are added issues of rape, child abuse, emotional rejection and other painful traumas.

There is no turning back or avoidance. The only way to survive this intimate hellhole is to go through the fire. And when they do—when Leda, Aran, Aurora and the rest of the family face their demons by remembering their past and rediscovering their roots, they are reborn stronger, more powerful and more purposeful.

“Mga Buhay na Apoy” is obviously a labor of love for Balintagos. Through this play—according to him, written when he was a young man, before he launched an acclaimed career in filmmaking—Balintagos attempts to reclaim his heritage and inspires his audience to embark on their own journey to rediscover theirs. This acknowledged descendant of shamans from Palawan effortlessly shows, through his deeply personal play, that when it comes to knowing one’s self, the journeyman not only touches enchantment, he or she becomes part of it.
Tanghalang Pilipino’s “Mga Buhay na Apoy” runs until Oct. 25 at Tanghalang Aurelio Tolentino, Cultural Center of the Philippines. Call 0917-8763678, 8321125 loc. 1620 and 1621, or 8919999; or visit ticketworld.com.ph.