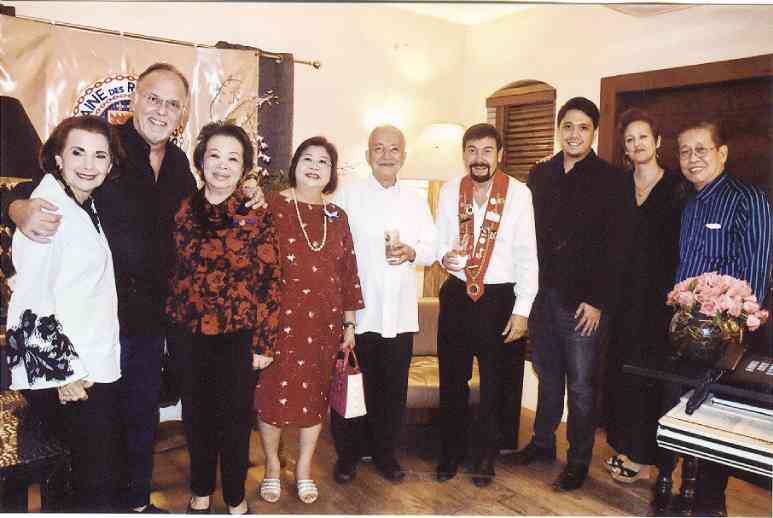 The Cebu chapter of La Chaine des Rotisseurs held a fellowship dinner at Anzani’s in Nivel Hills. Marco Anzani and his wife Kate Dychangco Anzani dubbed it “Ferragosto Gastronomic Tour of Italy.” It scored high among the 75 gourmets and gourmands who filled the place.

Most came earlier than the prescribed hour, as “free seating” had been decreed by Michel and Amparito Lhuillier. He heads La Chaine for the Philippines, she reigns supreme in Cebu. Seated with them were Fr. Ernesto Javier S.J., Teresin Mendezona, Paquito and Zenaida Chua.

An event of La Chaine implies gastronomic excellence and this was one such superlative occasion. For starters, there was black bread, literally, achieved with powdered black bamboo charcoal.

The green rice came with a sprinkling of edible flowers. Sea urchins were served on their shells along with homemade arugula “Tagliatelle.” The tiny apple smoked quails were stuffed with walnuts and minced figs. Dessert was light Gorgonzola Boule on honey with caramelized apples.

Among those present were Dr. Vivina Yrastorza with Simon de Leoz, Dr. Nestor Alonso and his wife Joji, Dave Sharpe and his wife Joy, Marguerite Lhuillier, Angie Mathieu and her son Mickey Paulson. They formed a lively and glamorous table with Margie Taylor, Rosebud Sala, Carmen Campbell and Lily Chung.

More: Alliance Francaise de Cebu director Louis Thevenin, Iris Arcenas with Jimmy and Bernie Aboitiz, Lani Pasquet and Jay Chiongbian, Andrei and Maitina Borromeo, Leo and Annalyn Taoke who were presented with a cake as it was her birthday.

Ambassador Francisco Benedicto hosted a dinner at Tsai Chen Chinese restaurant in honor of Song Ronghua, the new consul general of the People’s Republic of China (PROC) in Cebu.

The idea was to introduce consul general Song to the Cebu media with whom he established immediate rapport. Aside from being a very suave diplomat, consul general Song is also a writer, and he enjoys the company of journalists. We learned this from Sam Costanilla, who helped Ambassador Benedicto organize the lively gathering.

Conversation dealt with Cebu’s Chinese heritage, both in the ancestral and trade aspects. Diggings by archeologists and collectors reveal that porcelain found in Cebu date back to more than 1,000 years, from various Chinese dynasties.

A few days later, the Chinese consulate general held a grand reception and dinner at the ballroom of the Marco Polo Plaza Hotel. The event marked the 66th founding anniversary of the PROC which coincided with the traditional mid-autumn festival hence the presence of delicious mooncakes for all.

Consul general Song gave his speech entirely in English. He said that from 1949 to the present, life expectancy in China increased from 48 to 74 years. Illiteracy which was then at 80 percent is now at four percent.

This year, the Philippines marked 40 years of diplomatic relations with the PROC. China is now the second largest business partner of the Philippines. Tourist arrivals from China constitute the fourth largest group.

Acting Cebu Governor Agnes Magpale—Governor Hilario Davide III was in Russia—gave the welcome on behalf of the province. She said that when she arrived, she saw this pretty lady pin a red rose on consul general Song’s lapel.

“It was his wife, Mme. Song,” Agnes said, “and being an incurable romantic, my heart went out to them.” Of course, there was a collective sigh.

There was a message from Iloilo delivered by provincial administrator Dr. Raul Banias; and another on behalf of the City of Cebu by councilor Hanz Abella.

The program of songs and dances was hosted by Wang Yan Yan, a very articulate lady who introduced the various groups from Chinese schools around Cebu City.

When the disco number “I Love Cebu” was played, consul general Song and acting Governor Magpale joined the group on stage while everyone applauded.

The Honorary Consul of the Slovak Republic Antonio Chiu and his wife Nellie sat with Nicholas Smith, the new general manager of Shangri-La’s Mactan Resort & Spa.