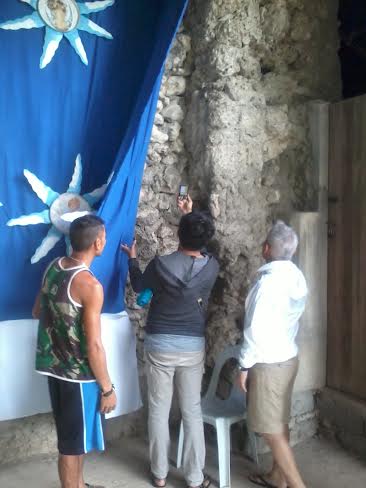 TEAM from UST inspects a portion of the “kumbentuhan

A SPANISH-COLONIAL structure likely to be a small fortification or a chapel was recently discovered in the archaeologically significant town of Calatagan in Batangas province.

Located on top of a hill in Barangay Lucsuhin, the structure was documented during the recent cultural heritage mapping project initiated by the Enrique Zobel Foundation with the University of Santo Tomas Graduate School—Center for Conservation of Cultural Property and Environment in the Tropics (USTGS-CCCPET) and the Department of Education.

The structure, called by the residents as “kumbentuhan,” is being used by a local faith group as its meeting place.

Zerrudo added the structure must have been also a strategic lookout against pirate raids.

Zerrudo, who teaches at the Cultural Heritage Studies program of the UST Graduate School, said it would be interesting if the relation of the structure and its surrounding areas to the earthenware unearthed in Calatagan in the 1960s was identified.

He noted the presence of Ming Dynasty porcelain shards and suggested the site should be checked by the National Museum.

Another discovery during the cultural mapping project is the modanza, a song-and-dance tradition which locals used to perform during harvest season.

Gloria Natividad Concepcion-Buenavente, English and science teacher and one of the cultural mappers, made this discovery when she interviewed an elder named Felipe de los Reyes of Barangay Encarnacion.

The modanza is performed so that workers on the rice field will not tire while harvesting rice. The lyrics discusses the environment such as the importance of trees.

“There is still a lot to be researched here in Calatagan,” she admitted, “so that its [heritage] won’t be forgotten.”

She said the cultural mapping was a landmark project, adding that the identity of the town and its rich heritage were discovered because of it.

“I now knew Calatagan well because of the cultural heritage mapping. Calatagan, indeed, has its own identity,” she said.

Among those documented during the two-month-long project are Cape Santiago Lighthouse, completed in 1890; Calatagan Church, which also dates back to the Spanish colonial period; a number of beaches and natural sites; traditions and other intangible heritage.

“There are many that need to be given importance [in Calatagan] like its culture because a lot of people are not aware of it,” said cultural mapper Christopher Patalinghug.

Joselito Rodriguez, Enrique Zobel Foundation executive director, said the cultural-mapping project should result in the establishment of a Nasugbu-Calatagan heritage craft highway. The project also sought to document the cultural history of the town and put up a local arts and culture center.

He added other materials for weaving were also being looked into, such as fibers from sugar cane and other indigenous plants.

“This project is important because this is the soul of the town. This will help you solidify the identity of the place,” said Rodriguez.

He stressed that people should always be reminded of the history of a place.

“For us to move forward, we should not forget the past because it is an important element of progress,” he said.

“We can move forward with new developments but still you don’t have to forget the traditions, the culture and practices of the people,” he added.

Aside from advising the local government on its development projects, Rodriguez said the foundation would design a training program for public school teachers on how to utilize the cultural mapping information and incorporate it in their class lessons.