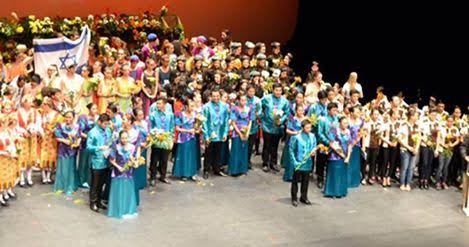 THERE were eight choirs in all, plus dancers, at the Abelardo Hall of the University of the Philippines-Diliman that evening. The work was in two languages: Latin and Filipino. Humming, chants and incantations heightened the spell. With the end of each act, the choir withdrew and another took its place.

With each interlude, choir members who filled the front row stood up to sort of explain what was transpiring on the stage.

The choral work being premiered in its entirety, after each section was composed separately from 2012-2015 for different choirs, was Chino Toledo’s “Misa Lingua Sama-Sama,” performed as part of the celebration of the centenary of the UP College of Music.

Explaining his work which he also conducted, Toledo said that “Misa Lingua Sama-Sama is a setting of Catholic Mass for chorus with small percussion instruments. It uses a combination of Latin and Filipino text similar to ancient prayer ritual practices and incantations in the Philippines. Traces of Philippine music material juxtaposed with familiar choral writing practices create a musical discourse in several musical layers.”

We hear the familiar Latin phrases from high school days: Kyrie eleison (Lord have mercy); Christe eleison (Christ have mercy); miserere nobis (have mercy on us); and …qui tolis pecata mundi (who takes away the sins of the world); juxtaposed with Tagalog prayers like “Kristo Maawa Ka (Christ Have Mercy).”

The dancers are from the UP Dance Company. The choreography by Herbert Alvarez is almost freewheeling, solemn then joyful, with modern movements. The psalms which recall the entry to Jerusalem become whips to dramatize the Passion. The Christ figure (dancer Michael Que) is then helped by the disciples (the other dancers) to a position approximating the Pieta (without the Blessed Mother).

There are hints of the Resurrection.

At the end, all the choirs converge upon the stage and surround the audience for one final, uplifting paean in praise of God.

“The whole piece is permeated with chanting and the evocation of ritual and play that are the essences of arts in human cultures,” says Toledo. “It is also inspired by the trance-like religious practice of ‘speaking in tongues.”

He adds: “This is a new type of choral music. It is modern and contemporary art music, but accessible.”

“Misa Lingua: Sama-Sama” is a grand production, an important work by a leading contemporary composer.